Help us make ‘The Case for Cycling’ 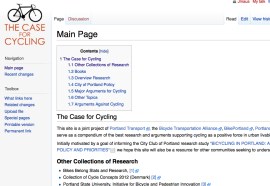 Check it out and contribute your smarts.

Back in April, when the City Club of Portland announced they would embark on a “comprehensive” study of how bicycling fits into Portland’s transportation policy, we took notice. This is because the City Club is an old, respected and influential organization and their research is taken seriously by local leaders and policymakers in Portland.

Amid concerns that City Club might embark on their study with a bias against bicycling, some folks around the local bike activism table wondered how best to make sure they start off with the right facts. On that note, local citizen activist (and leader/policymaker himself) Chris Smith has stepped up to create a new information resource he plans to present to City Club this week.

Smith, a current City Planning Commissioner who also has a run at City Council under his belt, has served on several City Club research committees. He says the study process is “scrupulously set up to objectively question everything” and he feels the best thing the community can do is to arm committee members with as many studies and data points as possible.

Smith and several partners; including the Bicycle Transportation Alliance, us, Portland Afoot, Portland Transport, and Active Right of Way, have launched The Case for Cycling. We hope this new wiki becomes a centralized collection of research and data that makes it clear that not only do bicycles belong firmly placed in urban transportation systems, they deserve even more priority and respect in funding and policy conversations.

Smith calls the wiki a tool for “crowdsourcing the case for cycling” so that means we need your help and smarts to make it really have an impact.

Head over to TheCaseForCycling.com and check it out. If you have something to add, please create a sign-in name and have at it. While this resource was spurred by the City Club’s research project, we intend to keep this up and have it become something useful for all communities.

Maybe the City Club can now focus on something that is a problem, like the proposed Columbia River Crossing.

That’s a good start. Glad to hear of it.

I listened to that City Club session later that week on OPB. Was fantastic. Joe Cortright, in particular, did a great job of ripping the CRC to shreds.

Jonathan, thanks for spreading the word.

We’re actually presenting the Wiki to City Club tomorrow, so I’d like to keep it pretty stable for the moment, then we may have some good feedback on how to make it more useful.

I do encourage people who want to help to sign up for an account on the wiki, as the primary way of communicating with writers/content providers is to e-mail to the registered user list.

Thank you for doing this. Seriously man, thank you for putting out the effort to make cycling better and safer for all of us!

Chris, thank you for spearheading this important dialog. Late last year I purchased the domain name yourdriveissubsidized.com which I have linked over to a subsidyscope.com article that shows how user fees and gasoline taxes as a percentage share of funding paid directly by motorists is actually going down and is, of course, only one part of how roadways are paid for. Maybe there is a better link to associate it with.

I don’t know if the domain name is any good (maybe too long) but we have to battle this concept that roads are paid for by cars. Elly Blue makes some great points on this in here Bikenomics zine/articles.

I guess I’d really like to hammer this point home that motorists do not pay for OR own the roads and that cyclists are, in fact, are subsidizing car use. By doing this, we can move away from the Oregonian/Lars Larson/Johnny-Q-Public false dichotomy of pot holes v. subsidized bike lanes and misconception that cars somehow cover the cost of the roads, maintenance ,and emergency services or that their value outweighs the externalized costs of war, obesity, pollution, injuries, death and dismemberment.

I have a video concept along these lines that might help. Anyway, I am at your service. Good luck!

Thanks, Dan. Somebody added the subsidyscope link to the wiki berfore I could 🙂

Even “The Case for Cycling” misses on “who Pays for Roads”.

Not only do automobile taxes not pay for roads, with the exception of major freeways, taxes do not pay for the construction of roads.

Nearly all roads frequented by cyclists were funded by private development with no tax money involved in the original construction of the road. The cost of road construction was included in the price of the lot sold by the developer. Then the road was deeded over to the City or County who collects a property tax on the developed value of the property for maintaining the street.

Great, find some references that document this and link them in to wiki!

I know that the President Elect of the City Club, Pat McCormick, is a cyclist, often biking from SE Portland to Downtown. And obviously someone who actually rides a bike regularly around our fair city will bring that personal experience to the table, so I am hopeful.

I’m not a wiki expert. Is there a way to submit references and arguments to someone who can appropriately incorporate them into the wiki?

Sure, feel free to e-mail me any suggestions at chris at chrissmith dot us

I’m not sure what “Taking care of our existing infrastructure” means…
but if you mean tearing down most expressways, I’m all in.

If it means taking a lane from MLK, Sandy, Foster, Powell, Barber, etc and converting that lane to a separated cycle track (Hello NE Cully) and lowering speed limits for motorists, I like it!

I even like taking out vehicular right of way and building plaza/ parks (Like NE 13th and Holman.)

But if by “Taking care of our existing infrastructure” you imply that no monies should go to create a world class bicycle/ pedestrian city until all potholes on I-5 are smooth, I’m going to have to pass.

I’m all for replacing automobiles with bicycles, but I can’t ignore the fact that as things are now, automobiles still make up the vast majority of traffic in Portland. Sure, I’d like more and safer bicycle infrastructure, but until bicycles replace the trucks that move materials people depend on (whether necessary or not) every day, I wouldn’t support maintaining roads only for selective uses. We can try to get more efficient with our bicycles, but doing so by overlooking inefficiencies in automobile use might be counterproductive to our overall goal(s).

Caleb. You want to help automobile use become more efficient? Let’s make a HOV (And tractor trailer) lane from Salem to Longview up the entire I-5 corridor/ I-205 corridor. That’ll move those trucks along

If we remove obstacles to bicycling and to using transit, we will have more individuals cycling and taking Trimet/MAX. We will also have fewer single occupancy vehicles. That’ll move that auto traffic too.

Most cyclists are in the “Interested but concerned” category. If infrastructure is built to make them feel safe, many will leave their cars for short rides. How efficient is that?

Right, Greg and better yet the freight haulers could coordinate with Southern Pacific that owns a special right-of-way already (that we, for the most part, don’t subsidize).

I had a good session with the research committee today helping frame up the big picture for them and letting them know about the wiki and other resources. There are a significant number of people who cycle on the committee, so I feel confident there will be a thorough discussion of the issues.

“The City Club process will try very hard to filter out anyone who has a strong opinion either way.” (Chris Smith 4/24)

“There are a significant number of people who cycle on the committee, so I feel confident there will be a thorough discussion of the issues.”

Don’t worry, some of my best friends ride bicycles.

Yes, I was worried that City Club’s policies could result in anyone who rides regularly being excluded by definition, which could possibly have left a committee that only had personal experience with automobiles, even if they had no conscious policy bias. I’m very relieved that was not the case.