This coming Saturday, May 20th, kicks off an astonishing 60th year of bike racing in Southeast Portland’s Mount Tabor Park. The 1.3 mile circuit around the city’s dormant volcano has played a prominent role in Portland’s rich cycling history. The famous course offers everything racers and fans love: challenge, lots of action, and plenty of nice views.

As John Browning, who has won enough races there to earn the nickname “Mr. Mount Tabor” says, “The Tabor course favors a rider with powerful climbing capability and who can recover quickly from hard efforts. The demanding profile could discourage new racers, but others may love it.” 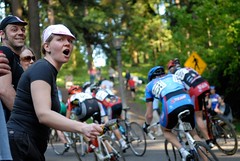 As good and challenging as the hilly circuit is, perhaps the best features of the venue are that it’s close to home for hundreds of competitors, it provides friends and family a convenient chance to cheer on their favorite racers, and it puts bike racing on display for hordes of park goers. Making bike racing — and spectating — easily accessible is a great recipe for bringing new disciples to the sport.

“It’s absolutely critical for amateur bike racing to have an event like Mount Tabor on the calendar. It’s one of a few high quality weeknight races held at close-in venues,” says Clark Ritchie, promoter of the Wednesday night series. “Many people ride their bikes to the race after work, race and then grab a burrito for the ride home. I’m not alone when I say we truly adore those warm, sunny early-summer evenings when we’re all out riding our bikes. [With the races] on Wednesday evenings, they’re often a great ‘tune up’ for weekend races, too.”

Part of Something Bigger

As local racer Darell Provencher commented on James Mason’s website featuring historic US bike racing photos, “The Rose City Wheelman promoted Mount Tabor beginning in the 1950s.” Then dubbed the Rose Festival Race, Portland’s mayor was on hand to present trophies and the Rose Princesses acted as podium girls in those glory days.

Nathan Hobson, who has promoted the annual weekend Tabor Circuit Race for the past six years, also remembers a National Championship road race using the Tabor roads as well as the surrounding residential streets to assemble a longer course to determine the stars-and-stripes jersey winners.

The current Mount Tabor course has also twice been a stage in the Mount Hood Cycling Classic, one of the biggest stage races in the West.

Although the overall pace may be higher, the accelerations sharper and the duration longer in those national-caliber events, the local Tabor events serve as great stepping stones along the way for those with bigger ambitions. Sue Butler (River City) and Alice Pennington (S&M Young Guns), two of the country’s top cyclocross talents, are frequent fixtures animating the women’s Tabor races. As Ritchie says, “Some folks, like Jacob Rathe (Garmin-Barracuda), Doug Ollerenshaw (formerly with the Health Net juggernaut), Barry Wicks and Erik Tonkin (both Kona MTB and cyclocross pros), come race Mount Tabor then go on to other pro races. I think that’s cool. One year one of the US Postal Service boys even raced.”

Give It a Whirl

Tabor certainly isn’t just for those with aspirations of World Tour greatness – in fact, the majority of racers are just looking for a fun activity to keep them fit. In that spirit, this year Upper Echelon Fitness will host a clinic for new racers before each Wednesday night race. “The clinics are open to all riders, but mostly for novice racers,” says Russell Cree, owner of Upper Echelon. The clinics will include a Q & A session, and tips on bike handling, riding in a group, gearing, and more.

How to Race Tabor: The Experts Weigh In

“Get over [the climb] with the group, hang on during the downhill, spin to clear the lactic acid from your legs, and then do it all over again.”
— Clark Ritchie

Who better to ask about the tactical approach to Tabor then Mr. Mount Tabor himself, John Browning. Browning races for the Evolution Racing Team out of Portland, and he started racing in Oregon back in 1987. These days he’ll often line up for the Masters race, then turnaround and give it a go with the Elites – and he’s pulled off back-to-back wins. Browning estimates that he’s done the weekend event 10 times, and in total has competed in 50 races at Tabor.

“The uphill sprint finish requires anaerobic power, but the cumulative elevation gain during the race doesn’t favor a pure sprinter. In other words, [it suits] a rider with a physiology that matches the course profile!” says Browning. “Compared to a normal road race, team tactics don’t play a huge role at Tabor. A team can help with your positioning and chasing breaks but it’s mostly about having the legs… The course suits me because it matches my physiology and reflects the training I do. I live on the west side and commute downtown, so a lot of my training is short hill repeat efforts on the way home from work.”

While Browning has good insight for those who hope to be in the mix, Ritchie lays out a good basic survival strategy: “I feel that recovery is key — your legs have less than two minutes from the top of the hill before the climb begins again. Don’t get dropped; I think it’s really hard to get back on if you get dropped on the climb. Get over with the group, hang on during the downhill, spin to clear the lactic acid from your legs, and then do it all over again.”

A mid-week Tabor race was one of the first events in which Doug Ollerenshaw ever competed. The local race inspired him to stick with the sport, and he went on to a successful run as a professional for top domestic road teams, including Health Net. Although Ollerenshaw has since moved to Atlanta, he’s still nostalgic for his Tabor days. “I actually had a lot more fun racing up there than I did at most of the races I flew across the country for,” he says.

Something Special. And Fragile

I spoke with a many people who are prominent in the Oregon cycling community for this article, and they all said how unique and important an event like Tabor is. The other common theme is just how delicate it can be to get permission and permitting to race there. “I have to go through the neighborhood association, water security [because of the reservoirs at Tabor] and the police to get approval – the permitting process is getting more expensive and complicated every year. It used to be $170 to permit the race, and just five years later it’s now $555,” says Hobson. “Racers need to be extremely grateful to have the opportunity to race at this venue, and to be respectful of other park users and neighbors or this location could easily go away.”

Ritchie echoes this sentiment: “Our ability to race there is very fragile and contingent on people getting along with the long boarders, the dog walkers, the hikers… Our permit could be pulled in an instant, and I rely on people’s good manners to help keep it chill.”

Saturday’s Mount Tabor Circuit Race runs from 8:45 am to 1:50 pm with categories for everyone from 10-year-old kids to grizzled veterans, and from beginners through seasoned Elite riders. The River City Bicycles Mount Tabor Series kicks off on May 30th and runs on Wednesdays through July 11th (with a gap for the 4th). Categories for the Wednesday races run from beginner through Elite, and there’s even a fixed gear category – bikes typically limited to velodrome competitions. There’s truly something for everyone, so if you’re new to bike racing, pack a picnic and the family and come check out the Portland race scene in a great environment. And maybe next time you’ll bring a bike, try a clinic and race.

We must also remember the titanic fixed-gear battles between Candi Murray and a certain former candidate for mayor! (Hint: not Eileen Brady!)

Now is a good time to celebrate the fabulous runs of David Auker and his silver helmet on his Calfee fixie. David’s times-to-climb equaled or bettered Cat 1-2 roadies. David is great and really knew how to exploit the equally great torque advantage of the world’s ur-bicycle.

Tabor is no course for pikers.

Big thanks to Nate Hobson for continuing a great event!

The finish wasn’t always uphill. The first time I rode, 1962, the race finished in front of the stone house on the flat by the reservoir. So on the last lap you’d crest the hill and you had either a flat out downhill sprint all the way to the line or else you got to recover while you got ready for a 200 yard sprint from the last corner to the line….Dirk Pauwels won the junior race that year, I was 5th. In the senior race five riders, included Bill Wild, contested the sprint. John Wilson of Seattle gave Ken Hay of Vancouver BC a shove into the crowd. From then on the finish has been up the hill, which makes it a better race. Back then quality bike races were so few and far between that we had riders from BC, Washington, Montana, Utah, and the Bay Area. The Rose Festival Race at Mt. Tabor often attracted the top road riders of the US and Canada.

Thanks for the comment and info, James! Finishing that fast and coming off the hill sounds pretty nutty — I’m glad we don’t have to deal with that now. We still manage to have some crashes in the uphill finish, (in fact I got tangled up in the last 100m this year) but at least we’re going slower.