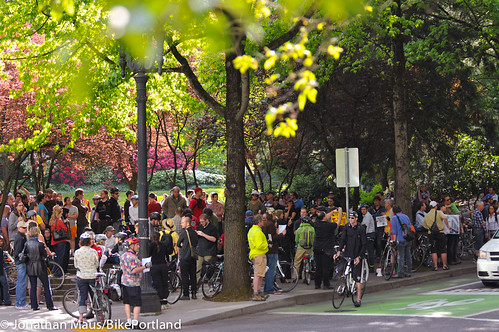 The corner of SW 3rd and Madison filled with people who came together to remember Wednesday’s tragedy.
(Photos © J. Maus/BikePortland)

Less than 48 hours after Kathryn Rickson lost her life while bicycling on SW Madison Avenue in downtown Portland, well over 200 people came together to grieve and to raise awareness for safer streets.

There were no speakers or agenda tonight. Most people just sat quietly and thought about what happened Wednesday. Others held signs; most of which were printed up by the Bicycle Transportation Alliance. The messages included: “This was preventable”; “Look right, save a life”; “Crashes are not accidents”; and “No more ghost bikes.” A long line of people stood on the curb of SW Madison, holding the signs so that passing traffic could not miss them. 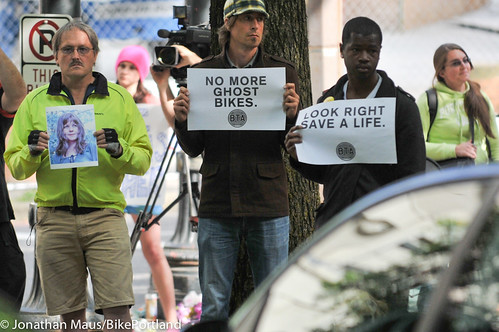 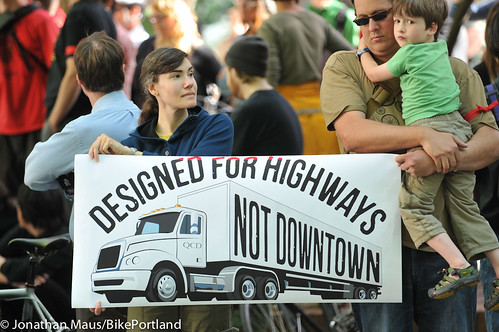 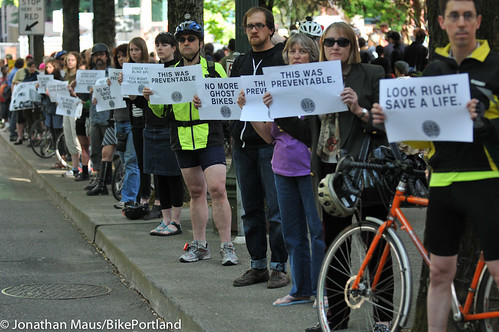 Signs aside, this was mostly a time for people to just be present and to let this tragedy sink in. I have unfortunately been to more of these events than I care to remember; but there is something very powerful about visiting the scene where tragedy has struck. It’s a feeling — a deeply sad one that’s mixed, at least for me, with frustration — that I think is important to feel. It reminds us about the seriousness of working for safer streets and it brings the community together in a way that nothing else can. 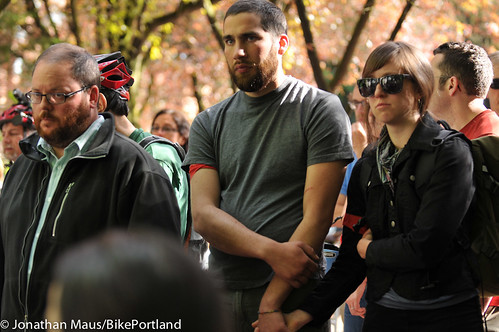 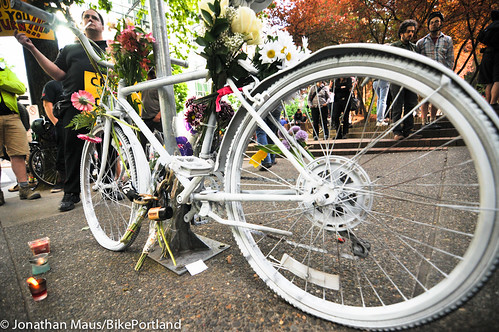 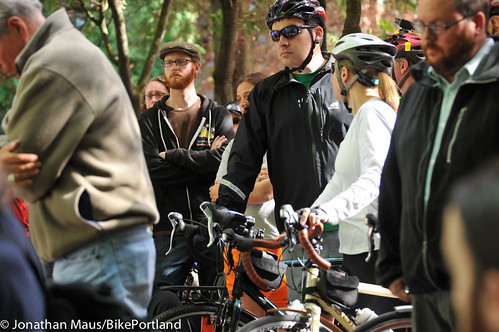 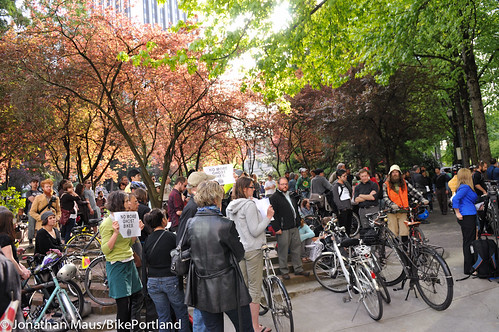 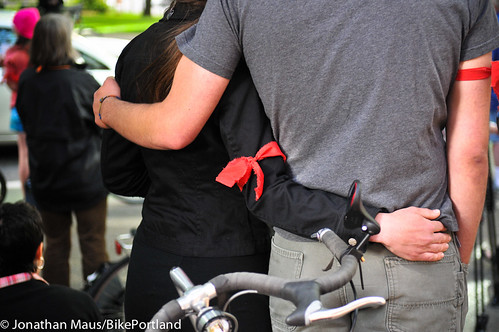 Among the crowd tonight was mayoral candidate Charlie Hales, City of Portland Bike Coordinator Roger Geller, PBOT traffic safety expert Greg Raisman, and City Commissioner Amanda Fritz. Fritz brought flowers and placed them in a vase on the corner. (Mayor Sam Adams had planned to come, but shared via Twitter that a sore throat kept him away.) 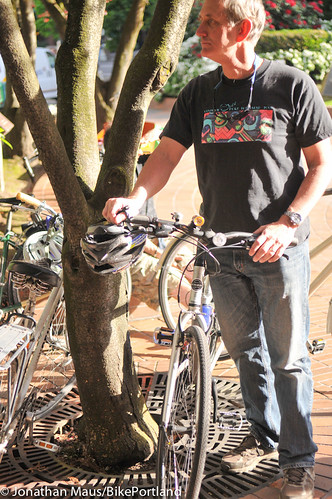 Charlie Hales was the leading vote-getter
in the recent mayoral primary election. 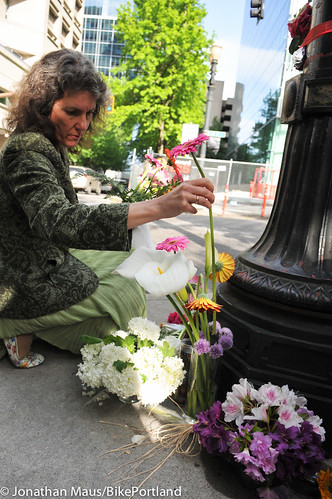 City Commissioner Amanda Fritz places flowers at a
memorial just steps from where Kathryn was struck.

On that same pole was a letter encased in plastic… 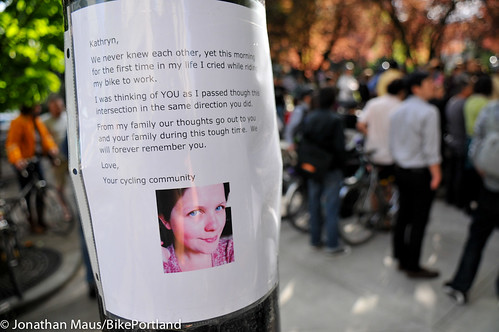 Here’s what it said:

We never knew each other, yet this morning, for the first time in my life I cried while riding my bike to work.

I was thinking of YOU as I passed through this intersection in the same direction you did.

From my family our thoughts go out to you and your family during this tough time. We will forever remember you.

This underscores another reason these gatherings are important. They provide Kathryn’s family and friends with great comfort, knowing that there’s a large community of people who care enough to show up — and stand up for — someone they had never met. 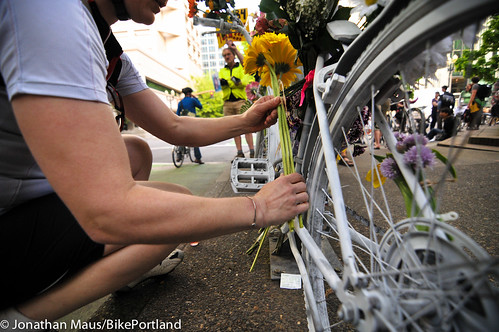 Among people who bike in Portland, there’s a shared experience; a small bond that forms simply from riding through the same intersections, facing the same fears, and, all too often, narrowly avoiding a similar fate to Kathryn’s.

For Kathryn and her partner of over four years, Ryan Gaughan, bicycling was something they experienced every day. Kathryn’s friend Valerie Liptak (who owned and ran the Madison House community home where Kathryn used to live), told me tonight that they didn’t own a car. Ryan was there tonight, surrounded by friends and his seven year-old daughter Madeline. He spoke to the media and he seemed, understandably, shell-shocked by what has happened. 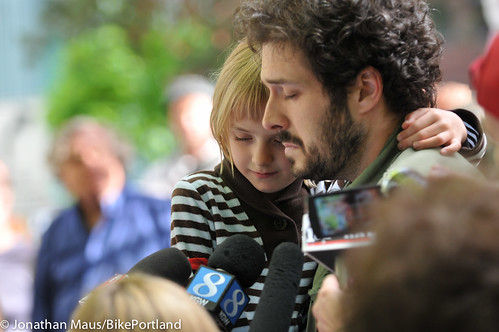 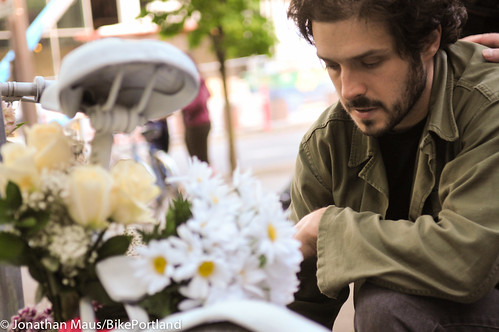 Thankfully, every time I looked up, he was hugging someone. 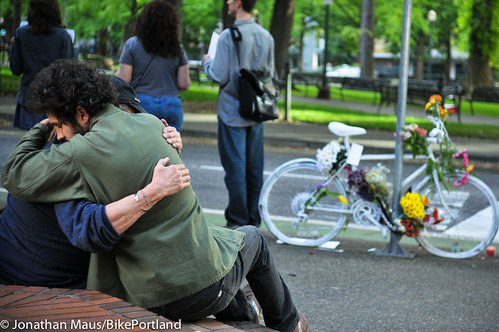 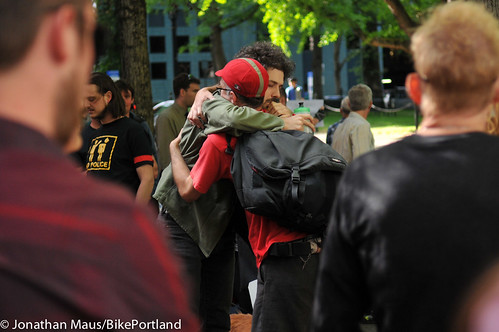 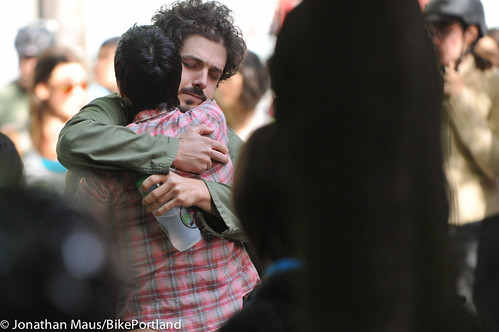 Liptak said Kathryn’s family is still in Rhode Island and they’re planning a memorial in June. She wanted me to take some nice photos of the flowers to send back to them. 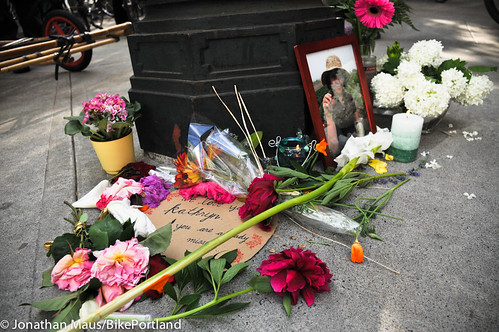 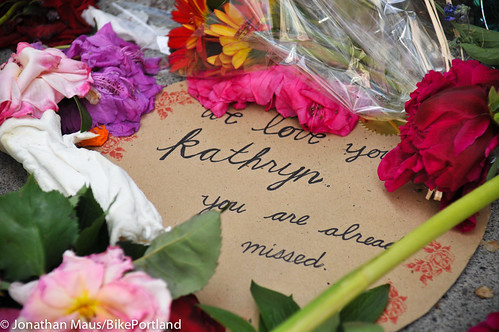 On Wednesday night, Kathryn was coming home from classes at Portland State University. She had gone back to school to pursue a Master’s degree. She was a playwright; and while she worked odd jobs and took classes, her dream was to write plays for the theater. “She was so bright, so smart…,” Liptak shared as her voice trailed off into sobs.

In the brief moment we shared together, I tried to assure Ryan that something positive would come from his loss. That maybe, if enough people come together, we can make changes that will make it less likely this tragedy befalls anyone else. We owe it to Kathryn, we owe to seven-year-old Madeline, and we owe to everyone that rides in this city. After all… 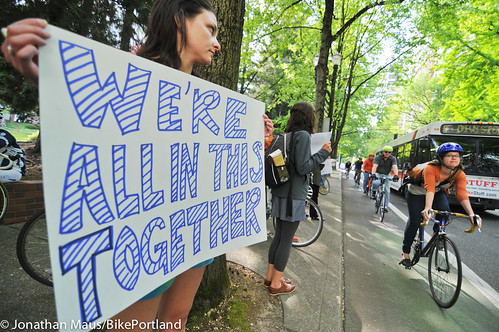 See more photos from the event in the slideshow below:

My Thoughts and Prayers go out to all who knew Kathryn. I’m sorry for your loss. She sounded like quite a person who deserved so much better than this.

Thanks, Jonathan. It was beautiful, but so sad.

I was glad we were able to make it tonight. Since I was there with a friend and between us we had 8 kids we stayed back in the park. We cruised around the block and past everyone as we were leaving so that we could see the signs. (We were the bakfietsen train.) I felt it was very important to add the message that even moms with kids are not going to give up the safety of the lane. I was glad that the atmosphere was quiet and respectful, too. While I did not know Kathryn, I attended as a mom and hope that her family finds some comfort in our remembering their daughter. I also hope that some lasting good comes out of this horror.

The “Look Right, Save a Life” sign was very powerful. I’d put a sticker that said that on my bike.

I’d put a sticker of that on my car.

My photos of the event have been uploaded…

I wholeheartedly agree with your thoughts about the mixed, emotional, and powerful feeling of being at a memorial like this. There are few other activities that would cause so many different people to come together to recognize someone very few of us knew. I hope we were able to create some comfort for her partner and his daughter.

Sam Adams couldn’t come because of a sore throat? Was he planning on giving a big speech? That is pretty friggin lame.

I took a picture of your Bakfiets…

Jonathan,
Thanks for the photos. Since we’re spending so much energy on the “collision” vs. “accident” debate, could you reconsider your use of saying she died from injuries that she “sustained” from the collision? Property sustains injuries. She was a human being. Humans suffer. She “suffered” her injuries. Thanks.
H

I am so sorry I missed this! I didn’t know about it till afterward. Thanks for your thoughtful and caring coverage and the wonderful pictures, as usual. …Guess I’ve got to get even more of a move on. I cannot express the depth of my sorrow for the loss of yet another beautiful human being and the devastation her loved ones are going through and will continue to go through.

KFD,…Your strength and work to share your own personal perspective is inspiring. You are an asset to the community. I wish to thank you.

Only this morning upon reading the latest, did I discover that Kathryn was Ryan Gaughan’s partner. I stood on the east side of the gathering, in quiet thought’s, asking my friends, if anyone in our circle knew anyone related to her. No one seemed to think so. I had a bad feeling that someone I knew in Portland would have known someone….

I had the pleasure of knowing Ryan for 6 years through work. Ryan, I am so very sorry about your loss. Please accept my humble prayers of hope and strength for you and your family during this time.

peace to everyone out there.

I paid respect Friday, but felt it very hard to stay. rode down to Hawthorne and did what she loved WAS riding her bike in Portland. peace to all. most of all RIP Kathryn!

Was anybody else bothered that Amanda Fritz showed up to the vigil given her previous public comments against investment in bike infrastructure or am I just being a jerk? I was sorely tempted to confront her and ask whether in light of Kathryn Rickson’s death she still thought Portland should stop funding infrastructure until cyclists do a better job of policing bike scofflaws. Thinking that the focus should be on Kathryn, I refrained, but it just seemed so crassly political of her to show up at the vigil given that she’s fighting for her political life right now.

I was very encouraged to see Amanda Fritz and Charlie Hales show up and pay their respects at the vigil. To me, it shows they both understand how important this stuff is. I was more bothered by the absence of those elected officials (and others running for office in Portland) who did NOT show up. City Hall is just one block away from SW 3rd & Madison. You’d think more of the folks who currently work at City Hall & City Council could have made the effort to walk one block and show their support.

I am so deeply sorry for your family’s tragic loss of Kathryn. It is a terrible way to reconnect with old orchestra buddies from half a lifetime ago.

Unfortunately, there isn’t anything I or anyone could say that will mend the hole in your and your daughter’s lives that has been ripped by Kathryn’s absence. Please know that there are more people thinking of you and your family than you know.

All my best in these worst of times,