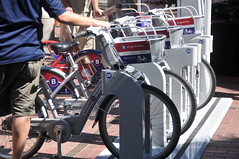 “If you look at it form an advocacy perspective, the fact that we’re inside and doing this contract work, I think gives a lot of confidence that the system is going to be delivered well.”
— Rob Sadowsky, Bicycle Transportation Alliance

We hinted at this partnership a year ago, but now it has been formalized.

In a recent member newsletter, the BTA wrote that they’ve launched PBSI to, “help build political and financial support for the [bike share] system” and that the move would, “generate revenue for the BTA and be an exciting new project in our portfolio.”

Reached on the phone this morning, Sadowsky said the idea to form a non-profit came from Rick Gustafson, whose Portland Streetcar Inc., will serve as a model for the new organization. (Note: Partners in the new non-profit are representing themselves, not necessarily the companies and organizations they work for.)

PBSI is formally named as a partner in the Portland bike share system application of Alta Bicycle Share (a local company that is the leading bike share operator in the U.S. and is expected to be a strong candidate for Portland’s system). However, Sadowsky said they will look to partner and assist whichever vendor ends up winning the Portland contract.

Sadowsky says his organization contemplated being directly involved as a bidder for Portland’s bike share system, but “decided it would be best for us not to be involved.” He likened the new non-profit to a booster organization that will work both as a cheerleader and an outside advisor for the eventual bike share vendor. “Our goal will be to build a broad base of political and financial support for the system,” he said. The group would also help form a coalition of advisors for bike share that could include representatives from the Portland Police Bureau, TriMet, Metro, and other local jurisdications and agencies.

As for the extent of BTA’s involvement once a vendor is named, Sadowsky says, “Organizationally, we want to see where things lie.” The BTA could, he said, end up being in a contractor role after a vendor is selected to do things like facilitate a public process to determine the best locations for rental kiosks or in helping create and deploy safety messages once the system is up and running. Sadowsky says the BTA has no interest in being involved in the day-to-day management.

Asked about potential conflicts of interest, Sadowsky said he sees no reason for alarm. “There is a clear self-interest, but we are clear and confident it is not violating any legal or ethical conflict of interest.” Is it possible for the BTA to be independent and critical of the City if necessary, while they are so closely tied to business partnerships and contracts? Sadowsky said they are already heavily involved as a contractor for Safe Routes to School and he sees this as a similar arrangement. He said they keep staff working on contracts separate from staff that testify at hearings on projects and funding issues.

For Sadowsky, being proactive around the bike share system is a way to help make the end product better and a way to increase revenue for the BTA:

“If you look at it form an advocacy perspective, the fact that we’re inside and doing this contract work, I think gives a lot of confidence that the system is going to be delivered well. On the other good side, I’m now generating revenue for additional advocacy. That’s just part of doing business in 2012. Contract work is such an integral part of our revenue model and there’s just not enough dollars from membership dues to sustain our work.”

The City of Portland released the request for proposals for our bike share system last month and applications are due by May 25th. The system is expected to be fully operational by April 2013.

This is very flattering of Alta but a bit hyperbolic. Leading bike share operator in the US, perhaps.

Well, if you look at the combined amount of bikes they have operating authority over, they just might be the biggest in the world. Which company is doing more? JC DeCaux? Clear Channel?

But point taken. I should know for sure before I write something like that. I’ll give it an edit. Thanks.

I think we all know that this RFP process is merely a formality. The notion that Portland would choose, say, B-cycle or an even less known vendor is silly when Alta is in their backyard.

The leading bike share operator in the world, as far as I know is the transit system of Hangzhou China, with 50,000 bikes: http://www.streetfilms.org/the-biggest-baddest-bike-share-in-the-world-hangzhou-china/

Starting to sound shady, if you ask me. Alta is playing behind the scenes insider games that they really shouldn’t have to get involved with. It’s unseemly, and after some of the accusations from Boston(?) they should know better.

(For the record, I generally like Alta and I am a total fan of Mia Burk. I just wish that they were doing a better job at managing perceptions.)

how does partnering with a for-profit bikeshare operator fit within the scope of 501(c)(3)?

1) To assist in the fundraising/sponsorship, and possibly create some contribution options that are tax-deductible.
2) Create a channel to provide community input.
3) Possibly be a forum that can help facilitate bikesharing in the region beyond the scope of the initial contract with the City of Portland. Let’s say Hillsboro was interested in getting into the system. The non-profit could provide a structure to bring that together beyond what the City may care to do themselves.

A semi-comparable parallel might be something like the Portland Parks Foundation. The City is responsible for running the parks, but having a non-profit to assist can create opportunities the City on its own can’t or doesn’t care to pursue.

Fundamentally we’re trying to expand the toolbox of ways to make sure that bikesharing is successful here.

i actually do not see the parks comparison. that is a foundation supporting a government function. here we seem to be talking about a nonprofit assisting a private vendor. if that is not what we are talking about, i think people need to get out in front on framing this.

What’s the main difference between Alta and B-Cycle?

This does seem shady. It means that these “leaders” often tone down the message and members of the bike community that they “lead”.

It’s done with good intent, but bad outcome. Building relationships is fine, but often a booster organization becomes a gatekeeper and power grab.

I think the bike community self appointed leaders have crossed the line from being boosters into questionable relationships. Rob and others who don’t fight for radical change might seem like they are moderate because it will lead to their ability to climb ladders and generate future personal income.

I wonder about this myself…
Of course I wonder why we have streetcars and bike share anyway.
(Trust me, I know why you have them, I just don’t know why “WE” have them.)

Now it is just seeming all convoluted.