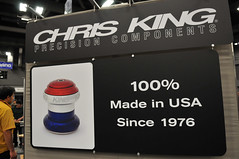 Continuing their strong growth since moving to Portland in 2003, Chris King Precision Components is set to receive one of the Mayor’s International Business Awards at a gala event on May 15th. At the event, the company will joined in recognition by other regional business stalwarts like Intel and Columbia Steel.

The award is another sign that the nearly 96-employee strong company — which makes its headsets, hubs, and other products at a factory in Portland’s northwest industrial district — is looking to change its local profile from just another “bike company” to a respected member of the local manufacturing sector.

“Bikes mean business… That is a critical message that we are trying to send to politicians at all levels of government. We contribute to the economic success of our community and provide jobs and health insurance for 96 employees.”
— Diane Chalmers, VP Chris King Precision Components

As we reported back in January, Chris King Precision Components has coupled their success in the U.S. market by maturing their overseas business in recent years.

According to company Vice President Diane Chalmers, the award reflects a concerted effort to build overseas demand for their products. “Our international sales have increased considerably over the last few years due to stronger relationships with our distributors,” she shared with me at the recent Oregon Active Transportation Summit, “and a lot of hard work and dedication from our sales team. This award is a great way to acknowledge those efforts both internally and externally.”

Chris King Prescision Components has also played a key role in building the local momentum for the “Bikes Mean Business” initiative. That effort is being pushed forward by the Bicycle Transportation Alliance (BTA) through outreach and partnerships with regional businesses, public events, and other campaigns. (The BTA moderated a “Bikes Mean Business” panel at the Oregon Active Transportation Summit on Tuesday. I’ll share a post about that soon.) 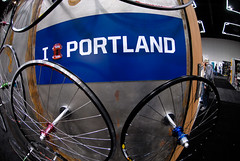 For Chalmers, “bikes mean business” is much more than just an advocacy campaign slogan. “That is a critical message that we are trying to send to politicians at all levels of government,” she says, “We contribute to the economic success of our community and provide jobs and health insurance for 96 employees.”

All of these messages of course, underscore the big picture of the company’s proudest achievement: That they make their own stuff. Here’s how Chalmers puts it:

“This is also a good opportunity for us to highlight that we are a manufacturing company first and foremost, and that it’s possible to manufacture products in the US and remain viable. We have an opportunity to represent this dying art both in and out of the bike world.”

— The Portland International Business Awards dinner and gala will be held at the Kridel Grand Ballroom at the Portland Art Museum on May 15th. The event will be emceed by Jonathan Nicholas.

Peejay-
In some regards it is a dying art. I work for a local manufacturer and we have a very difficult time finding skilled machinists and wleders. We are often forced to re-hire retirees (which are slowly dying off).
It is quite viable to build things in the US, especially if one were to remove overseas incentives and shelters, but US manufacturing skills as a whole is not what it was 20-30 years ago.

Manufacturing needs/skills have changed in the last 20-30 years. I work for a large local manufacturing company and the biggest changes have come about due to CAD/CAM. Most of the products designed today cannot be made on a machine operated by person. The shapes and complexity have pushed almost everything to CNC. This has caused a wide gulf in the skill sets on the manufacturing floor. There are a few very highly skilled people that program the machines, design/build the fixtures to hold the workpieces and do prototype work. After that there are a lot of workers that are much less skilled and essentially monitor a machine, do some quick QC, and load raw materials into the bed of the machine tool. The highly skilled folks are difficult to find and very valuable. The low skilled workers are easy to find because it is a job almost anyone can do with very little training.
The other thing that CAD/CAM + CNC machines has done is jump up the productivity of the factory floor. CNC machines can be re-configured to produce a different part much quicker than the old days so fewer machines are needed.