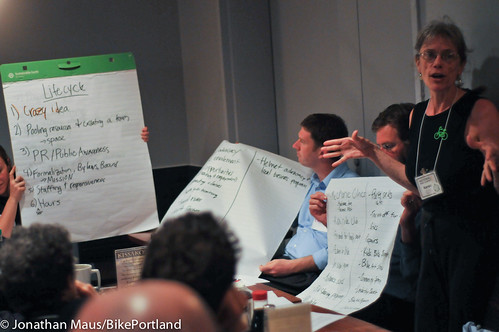 About two dozen leaders from a nationwide network of community bike shops met at the National Bike Summit to share experiences and set a course for the future.

On Thursday night, when most National Bike Summit attendees were taking a hard-earned break and thinking about which party to go to, over a dozen leaders of small, community bike shops — organized under the Bike Collective Network umbrella — came together for a summit of their own. 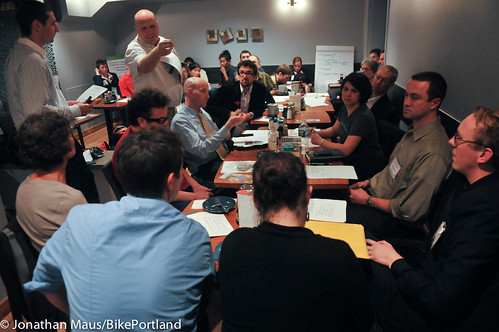 Jeremy Grandstaff (standing in upper left) from the Alliance for Biking & Walking, helped facilitate the meeting.

As the urban bicycling revolution continues, these non-profit shops are finding strong demand for their distinct mix of grassroots advocacy and ability to provide affordable bikes to underserved communities. In order to serve a growing market, these shops are now looking to the Alliance for Biking & Walking for support and the two entities are considering a formal partnership.

So, what exactly are community bike shops?

“We talk about food deserts, well we also have bike deserts and community bike shops can be the oasis in those desserts.”
— Jeff Miller, Alliance for Biking & Walking

They come in all forms, but generally they’re part DIY-focused, neighborhood bike shops (recycling used bikes and selling them for cheap) and part grassroots advocacy groups (providing a gathering space for communities and running both staffed and volunteer programs). They don’t sell new, high-end bikes like traditional shops, and their style of advocacy is more people-centric and less focused on policies and infrastructure projects than large advocacy groups.

Furthering the distinction, Alex Wilson from West Town Bikes in Chicago added, “If larger advocacy groups are interested in infrastructure and facilities, it’s the community bike shops that are building demand for those facilities.” Or, put another way by Jeff Mitchell of Reno Bike Project, “We are the foot soldiers of putting butts on seats.” Speaking about how he’s never sold a bike worth over $500, Mitchell added, “We’re like the Fugazi [a popular punk band known for their “DIY ethical stance, manner of business practice and contempt towards the music industry” according to Wikipedia] of bike shops and our lack of classism is a very important thing.”

In the past few years, the Bike Collective Network has served as an online resource and an educational network for these shops. There’s the annual BikeBike! conference, an email list, a wiki full of information on how to start one yourself, and more. 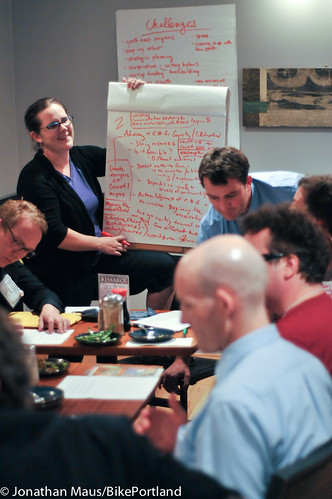 According to Jonathan Morrison, executive director of the Bicycle Collective in Salt Lake City Utah, there were about 20-30 community bike shops in the U.S. back in 2006. Today, he’s aware of over 300 — a growth curve that mimics the rising tide of biking in America.

Yet as they’ve matured and grown, so too have their ambitions and challenges.

Some, like the well-established Recycle-a-Bicycle in New York City, need more capacity to keep up with demand. Others, like Reno Bike Project, have run out of used bikes to refurbish (thankfully, Burning Man keeps the organization alive by bringing in $50,000 in sales in just one week).

The question now is, what’s next? How can these shops play a larger role in the national bike movement? Could more collaboration with larger, traditional advocacy groups like the San Francisco Bike Coalition and the Bicycle Transportation Alliance, be mutually beneficial? How can more established advocacy groups and the bike industry leverage the success of these community shops to help fan the flames of bicycling nationwide?

These are some of the questions leaders of this mini-movement are asking themselves. Along the way, they’re also beginning to understand that the work they do has an important and distinct role to play.

“We’re approaching our work from a community health perspective, not from a transportation perspective,” said Alison Graves of the CCC during the meeting’s facilitated group discussion. “There’s more to the story than transportation.”

Ed France from Bici Centro, a project of the Santa Barbara Bicycle Coalition that serves that California town’s Mexican community, agreed: “We are reaching an underserved constituency, these folks have a role in advocacy and we have a role in facilitating that.” He also added that, buying a bike at a regular bike shop would be impossible for many of his customers. “Our customers used to be served by stolen bikes and crappy K-Mart bikes.”

While confident in their role and their rising impact, hurdles — mostly around finances — remain. 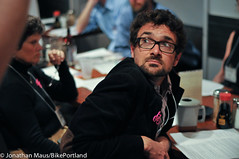 It’s important to understand that while frustrations exist, these grassroots advocates are not angry or resentful of their more polished and well-funded peers; they’re simply hoping for stronger collaboration. And the connections are already in place: Bici Centro is a project of the Santa Barbara Bicycle Coalition; Recycle-A-Bicycle began as a youth program run by the large and well-funded Transportation Alternatives; the leader of the CCC, Alison Hill-Graves, sits on the Board of the League of American Bicyclists.

Hoping to strengthen this connection is America’s largest coalition of “people-powered” advocacy groups, the Alliance for Biking & Walking. Their leader, Jeff Miller, was in attendance at the meeting and his staffers helped facilitate it. The Alliance exists to strengthen advocacy groups. They publish a comprehensive Benchmarking Report (giving groups facts and data to make their case), they host a leadership retreat, give out annual advocacy awards, and much more. Miller said since community bike shops serve as popular community gatherings points, they are a “gateway into bicycling,” for many people.

And now, Miller is prepared to have the Alliance put its resources where his mouth is.

At the meeting Thursday night, the leaders of the Bike Collective Network shared a formal partnership agreement between them and the Alliance. The goal of the partnership would be for the Alliance to provide organizational support for community bike shops and in return, the Bike Collective Network would encourage shops to join the Alliance and do more advocacy (not just bike repair/sales). There are a lot more specifics in the partnership, but suffice it to say, both entities would help each other grow and prosper.

As bicycling’s reach extends into new territories, we need these bike shops at the front lines. This partnership would give them the organizational footing they need to keep pressing forward.

— BikePortland’s coverage of the 2012 National Bike Summit is brought to you by Planet Bike.

Thanks for more great coverage, and thanks to Planet Bike for supporting your coverage of the National Bike Summit as well.

Just want to give a shout out to a great program that city of Boston and the Boston Cyclists Union have been running- Bike to Market, where bike mechanics have a stall at farmers’ markets which are in both “food deserts” and “bike shop deserts” to do low cost bike repair in underserved neighborhoods.

Thanks for the great coverage of the Summit for those of us that could not attend! I am a part of a DIY bike group for women, transgender and femme cyclists in Minneapolis and I love to read everything I can about this topic.

This is a great step forward that we are taking, getting organized and raising our profile in the advocacy landscape. We have an important role in broadening access to bicycling and, in turn, broadening the movement. Our organizations are incredibly diverse, serving a wide array of audiences. Some focus on women and transgender groups, others focus on communities of color, still others focus on youth. We are successful in ways that the broader, more traditional industry/advocacy organizations strive toward.

A hurdle for us is that we are perceived as competition among some in the bicycle industry. I look forward to the day when we have moved beyond that. We are helping to grow the pie, not cut it into smaller pieces.

Another hurdle is that we are not always acknowledged by others in the advocacy movement. Among our next steps include documenting our collective impact, which I think will be a big eye-opener (e.g., bikes recycled, volunteers engaged, children/youth reached, etc).

Keep an eye out for more. I’ll also be talking about this on the Community Cycling Center website/social media. So, stay tuned!

Wow. I didn’t realize how far ahead of the curve the Community Cycling Center was when it was enstablished in 1994.