“Terrible”, “horrible”, “worst ever”, “disaster”, “defective” — these are just some of the terms that high-profile media outlets and top-ranking officials have used to describe the House transportation bill (H.R. 7, full text here as PDF).

Realizing that the bill is so far off base that no amount of amendments would help, national transportation advocacy groups have launched a coordinated attack to kill the bill.

Transportation for America, the League of American Bicyclists, the Rails to Trails Conservancy, the Safe Routes to School National Partnership, and hundreds of local and regional bike and transit advocacy organizations across the country have launched an attack against the bill, starting today with a national effort to flood Congressional offices with telephone calls voicing outrage. 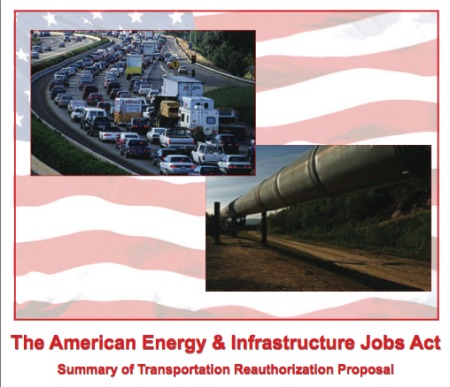 The cover of the Republican’s summary of the bill. Cars backed up on freeways and huge pipes of oil criss-crossing America is their vision for the future. No thanks!

I am usually hesitant to resort to fights when it comes to advocacy — I prefer to frame things in a way where no one feels they can claim victory or defeat. But this time, it seems clear that the Republican party has launched an assault on biking, walking and transit, and without an equally energetic response, America’s transportation system will be at even greater peril than it’s already in.

Backers of the bill, which include the Highway Users Alliance and the US Chamber of Commerce, applaud its “back-to-basics approach” and it’s “funding priority given to the National Highway/Interstate System.”

On the other end of the spectrum, Streetsblog DC published a helpful guide to HR 7 this morning titled, Six Lies the GOP Is Telling About the House Transportation Bill. Read that post, get informed about what’s at stake (a lot), and then pick up the phone and call your Congressional representative.

If you live in Portland or Oregon, your rep is likely already fighting HR7, so consider urging a friend in a different to take action.

Word on the street is that Congressman Earl Blumenauer has called an emergency meeting with Portland-area stakeholders to discuss next steps and other efforts to kill HR7. We’ll keep you posted.

So when the bill is killed, what then? (I’m all for starting from scratch, I’m just curious as to what happens in the interim in terms of current funding – does it stop? Continue at current levels? What’s the timetable they have to get something new submtted for approval?).

Seems inexcusable to construct more roads, etc (even though there might be a demonstrable need – as in transit options) when our current infrastructure is falling apart.

I agree, and memories are fresh from another public victory. It’s just three weeks since a frenzy of protests from citizens and tech companies forced the recall of SOPA the Internet piracy act backed by Hollywood.

Lawmakers thought Hollywood (and it’s full-court lobbying) called the shots on this kind of thing, discovered the world had changed.

Transportation has changed too.

Johnathan, could you add a ‘share’ link for facebook? It would make spreading issues like this a lot easier for people on their phones. Right now you only have tweet or g+ links (I use neither). thanks.

Thanks for pointing that out Lance! Can’t believe I haven’t had one up there. I do now!

I have a wild idea.

The Mormon Church loves bicycles. Their missionaries get around by bicycles all the time.

Is there any way that they can become our ally in this effort?

Many of them are republican (Romney is one).

If the infrastructure is torn out, then the Mormon’s cannot perform their missionary roles.

Johnathan, have there been any suggestions from advocacy organizations on how to reach out to folks in other House districts?

It always feels futile when these alerts come up because we’re just sending emails to Earl when we already know he has our back. I do it anyway so he can track/cite support from constituents, but really we need to speak to other representatives in order to have an impact on the actual votes cast.

Is it worth calling US Representatives in Washington, etc. even if we’re not their constituents? Is there a list of Reps who might be on the fence about this bill where we could make a difference pushing them one way or the other? Should we call our relatives in Vancouver and tell them to reach out to Jaime Herrera Beutler, or is she a lost cause?

Help is particularly needed in calling these area representatives if they represent your district, or in reaching out to friends in these districts:

Oops! Todd had it right the first time. More coffee. Less blogging for me. But check out the map if you’re confused.

I just called Kurt Schrader’s office and let them know of my opposition and how it would negatively affect our business.

This bill is a direct result of the disfunction of the House of Representatives today. It is a partisan bill, with accounting trick funding, that will be further decorated like a Christmas tree on the House floor with even more radical proposals from House members in exchange for their vote.

Even secretary LaHood, a Republican is critical.

The hope is in the bipartisan Senate bill which is half the size of the House bill.