“We have lots of staff that bike to work up and down that corridor all day long on N. Williams and a lot of us drive as well. So these issues are near and dear to our hearts…”
— Lisa Sedlar

The chain’s decision to locate their 12th 13th store in this area comes on the heels of a wide-ranging community discussion about how changes to Williams Avenue might affect long-time residents. While reaction to the New Seasons announcement has been very positive, there are specific concerns about how a new (and likely very busy) grocery store on a currently vacant parcel of land will impact what is already a high volume traffic corridor with serious safety and livability concerns.

Sedlar addressed the committee during the public comment period at the end of the meeting. After thanking the committee for their work, she reminded those in attendance that New Seasons’ store support office is located in the Vancouver/Williams corridor: 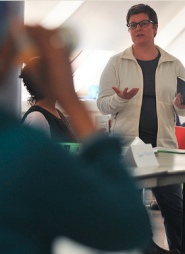 “We have lots of staff that bike to work up and down that corridor all day long on N. Williams and a lot of us drive as well. So these issues are near and dear to our hearts and safety is the most important concern for us.”

Sedlar added that their objective is to “partner” with neighborhood associations and “listen to what they want and need.”

During the meeting that preceded her comments, the topic of System Development Charges (known as SDCs, fees paid to the City by developers to offset impacts new buildings have on the transportation network) was raised. Sedlar acknowledged these fees, saying, “There are a lot of SDCs involved in this… It’s a lot of money.”

“Hopefully that money,” she continued, “is going toward improving the safety and traffic conditions up and down N. Williams.”

Another topic discussed at today’s meeting was how to best remember the unfortunate history of disinvestment and discrimination in the area. Sedlar told the committee she’d like to be involved in any efforts to create a physical memorial of that past. They’ve kept some bricks that were on the lot when they first came to the neighborhood to scout the new location. The bricks were part of a building, Sedlar said, “that was facing Williams.” The building housed a printing press that was used by Portland’s first African-American newspaper.

In an answer to a question from a committee member about traffic concerns. Sedlar said her company is already in contact with PBOT and that they’ll “do everything we can to make sure the neighborhood is safe.”

I’ve got a phone interview planned with Sedlar tomorrow morning and I plan to ask her more details about bike access and other transportation issues. Stay tuned.

I’m not entirely sure of the significance of New Season’s timing of their announcement of intent to build here, but I’m pretty sure I read recently that SDC’s were reduced rather drastically within the past few months. I tried to find the article I read it in, but to no avail. I am quite sure that the city has recently reduced the fees however, because upon reading about the significant reduction, I fondly recalled that I just paid a bunch to start my business about two years ago. Water & sewer especially were really steep, and after finding out about how water & sewer fees are spent, I can’t say they are spent entirely well. I wish that I’d felt at the time that more of the SDC fees were going towards “improving the safety and traffic conditions”.
Regardless, it’s very clear that everyone involved in development along this corridor knows that there are lots of eyes on them and they’re being very sensitive to how they portray their motivations.
I hope the outcome is as equitable as it is being given the opportunity to be, cause it sure is dragging on. Adding this significant new player (New Seasons), both economically and socially, to the mix will undoubtedly change the course, nature and pace of the evolution of the neighborhood.

That was only for ADUs, or “granny flats.” SDC exemptions for ADUs will be closed in 2013. SDC charges have actually increased in the past few years.

Let’s not forget about trucks unloading. The New Seasons on 41st and SE Hawthorne has no loading docks. Consequently in the morning trucks are parked all over the road, often illegally, and the intersection is markedly more dangerous than it should be. I emailed the store manager and got a quasi-generic reply. I then got an email from their Operations Manager who really wanted to hear from me. I called her and left a message. Haven’t heard back yet. That was mid-December. Just sayin’.

That intersection is retarded. Stop lights in two directions, stop signs in the other, which creates a lot of confusion for everyone. Just make it a fully controlled stop light in all four. But to be honest, I don’t really see massive problems with trucks there.

Maybe it depends on time of day.

Yeah, of all the stores the Safeway over on NE Broadway and 13th? has an interesting, below-ground delivery bay for semis. They go down below the store on one end, unload, then pop back up out of the other side. Seems to work OK.

Minutes after posting this the Operations Manager called me. Coincidence?

More traffic, more people biking, walking, driving, more trucks…this is all good. Its what we hope for; its called a growing economy, and it will slow everything down. Next we need more housing on the adjacent empty blocks…six stories for sale and/or rent. Bring on the congestion on Williams/Vancouver.
New Seasons here will be transformative.

Exactly. If you want sprawl and open spaces, move out to the suburbs. Congestion is a good thing for cyclists. The more congestion we have, the higher the cycling modal share.

Couldn’t agree more with Lenny. As a long time resident of Eliot I can’t wait for this store to open so I can bike with my kids to buy groceries. Hopefully this will spur more discussion of a bike blvd. on NE Rodney as an alternative to Williams.

Having a good alternative route is probably a good idea. With all the additional traffic, trucks, pedestrians on top of the cars entering/exiting the Fremont Bridge, this area could get pretty hairy for cyclists trying to pass through it, especially during busy periods like rush hour.

I find it interesting that a potential New Seasons is met with glad hands but the bike and a bike lane is seen as the harbinger of gentrification.

Yessiree Case, whats up with that?

Just ask anyone who lived out on Belmont when Zupan’s went it…rents will go up in Eliot; property owners will see a nice jump in their equity. Make a neighborhood attractive, and guess what? it attracts people. Crime and grafiti kept things at bay until inner North Portland became the last affordable quandrant, then bingo.
PDC’s Interstate Corridor URA which extends to MLK is sitting on the better part of $300M for housing and economic development, in part to hold long time residents harmless as capitalism does its wonders. The CAC meets quarterly; get involved and help get more $ flowing to low income home improvement and small business grants, etc.

I don’t really know. I’ve had a number of conversations with my wife about this issue as she works at a company with a storefront on Williams. Even she and I can’t see eye to eye on this, we’re both white cyclists but have differing views on the situation. Being a part of a business with a stake in Williams’ future I can see her concerns. Parking is poorly conceptualized there and the businesses rely on parking for their car driving patrons. Having sections with 3 or 4 resturants per block and only street parking seems like a very poor design. Then again, the developers got their money, so what do they care? Look at the Pearl, same situation really, just in a blocked area instead of a straight line. None of these developers are going to address anything like livability unless forced into it by regulation, too bad the city needs their money so bad that they just let them buy out of their obligations to the community.

If the neighborhood was concerned about a bike lane accelerating the gentrification of their neighborhood, I wonder how they feel about this. A new seasons being built is pretty much the sign that the neighborhood is changing for good.

Now it seems that a plan to address traffic on Williams will have to be implemented because this will add even more traffic.

So, what about affordability of what they sell, given the severe income gap between their target audience and their potential neighbors?