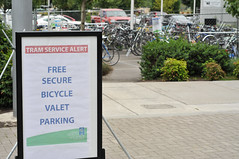 Oregon Health and Science University (OHSU) released its Bike Program Report for 2011, including results from their member survey and an update on their online trip log.

As John Landolfe, OHSU’s Transportation Coordinator, says at the beginning of the report, “2011 was a banner year for biking at Oregon Health & Science University.”

He continues, “We counted more bikes than ever on campus, marked one year of operation for our web application, test ran a popular bike valet, and the American League of Bicyclists rated us as a Gold Bike Friendly Business.”

Growth in the number of people on bikes comes from a number of factors including the bike valet pilot program, the closure of Sam Jackson Road, and more frequent incentive payouts thanks to a new online trip log.

OHSU’s rider survey also provides an interesting glimpse into why people ride and what’s keeping them from riding more. 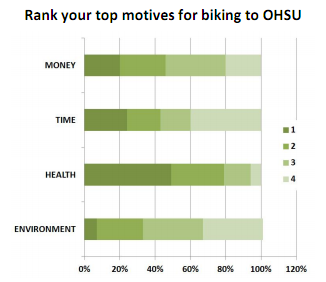 Respondents said the top challenge faced when riding a bike near OHSU was “road safety” so it’s not surprising that almost half of the 280 people surveyed said that “safer streets” would encourage them to ride more often. 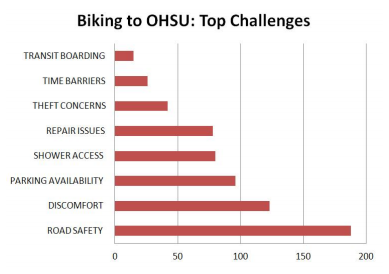 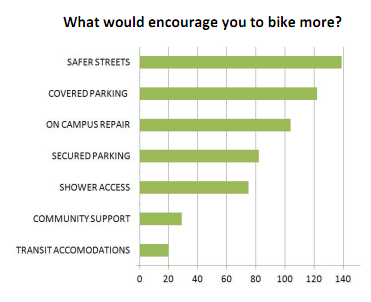 It will be interesting to compare these numbers to next year’s results as OHSU builds on the success of its bicycle valet pilot program and as bicycle access to the south waterfront continues to improve.

You can see the full report (in a PDF) for yourself here.

Do you ride your bicycle to OHSU or around the south waterfront? Does the survey accurately represent your motives for biking? Tell us below in the comments.

UPDATE: Landolfe highlighted one more interesting piece of data in the comments. He writes (emphasis mine):

The numbers I find personally most interesting are the overlayed trends on page 5…What we find is that the trips trend upward over the year but correlate most closely to temperature (and not rain or other events). Basically, for every degree of temperature, you’ll find a fraction of bicyclists who say “ok, 43 degrees is my threshold” or “68 degrees is when I take my bike out of storage.”

So whatever resources we provide & barriers we remove may not change people’s habits day by day but do increase & sustain ridership over the long term. If you’re looking to get more people riding at your workplace, consider giving em gloves.

UPDATE: Landolfe has provided additional context behind the question regarding what motivates people to ride:

The original question on motives was meant to tease out the largest possible themes. Health was actually written “physical/mental health” in the survey. I would presume a significant number of people citing health were thinking mental health–and fun in particular.

Reminds me of another transit service alert we can all agree on.

Thanks for the write up. The numbers I find personally most interesting are the overlayed trends on page 5 (link below). The daily trip counting gives us a highly specific trip history over 12 months for 2000 riders (data not being compiled in many places, to my knowledge). What we find is that the trips trend upward over the year but correlate most closely to temperature (and not rain or other events). Basically, for every degree of temperature, you’ll find a fraction of bicyclists who say “ok, 43 degrees is my threshold” or “68 degrees is when I take my bike out of storage.”

So whatever resources we provide & barriers we remove may not change people’s habits day by day but do increase & sustain ridership over the long term. If you’re looking to get more people riding at your workplace, consider giving em gloves.

That’s a really interesting point, John. And there’s probably lots more that could be done to clue people into the ways that cold-weather biking could be made more comfortable. I took a snowboarding class once, and a motorcycle safety course long ago, and both emphasized the value of gauntlet gloves that cover up your sleeves and keep the cold from sneaking in. Motorcycle gear especially is all about keeping the wind off your skin.

With bicycling being something I’ve always just done, I’ve never taken any courses in how to do it right, but drew from those other lessons to keep me warm on my bicycle. Now I can’t imagine cycling in winter without my waterproof gauntlets, and other stuff like wicking layers (or just a snug-fitting base layer) to keep the wind off the skin.

It’s really compelling to think that simply supplying some better gear and imparting some decent knowledge could have such a direct affect on the number of people riding.

Yeah, HTFU. It’s pure coincidence that my miles went up when I got a more comfy seat.

So “health”, “time and money”, being green – all good reasons, I guess, and all benefits I will take (although, “time” is rather a major cost for me, as riding bike to work takes much longer than driving), and maybe I should read the full report to see if “fun” was mentioned, but that’s my #1 reason.

(Actually, this time of year I think the reason may be more along the lines of “I like to bang my head against the wall because it feels so good when I stop”. Which raises another reason that I don’t usually articulate: Building character and self-esteem by enduring hardship and discomfort.)

“smugness” was not a choice. 😉

Nor were tram hours a choice for barriers, which is silly. That’s the only reason I ever drive- when I need to be in at 0700 on a weekend. Though maybe that’s what they meant by transit accomodations.

The original question on motives was meant to tease out the largest possible themes. Health was actually written “physical/mental health” in the survey. I would presume a significant number of people citing health were thinking mental health–and fun in particular.

It will interesting to see if the improvements to SW Moody doesn’t push ridership. The last few years it has been more like cycle cross.

I travel from south of OHSU and I am see an increase in riders since the new Moody came online.

They attach to the handlebar covering the brake and shift levers, which means you can operate these in comfort. There is enough room that your hands can breathe and lose sweat but it can be sealed off from the environment. Even the thin ones I have (complete waterproof, windproof shell and 1~2mm crushed fleece/felt) can be use with no gloves down to just below freezing; after that I use a very thin liner glove because I need tactile dexterity.

I got mine current ones 5 years ago from Bike Gallery (~$35) in Beaverton after confusing the staff for a bit. The Beaverton bicycle officers had some and they directed me to this LBS.
I expect any LBS can get them but you might have better options checking with some of the online crafters and even asking a company like Mountain Soles Footwear & Fabric Repair. If they won’t make they can hook you up with someone who can.

These can be dirt cheap and ought to be given out with free helmets and hideously ugly fluorescent rain capes.

As a one time serious downhill skiier, I find myself loving winter riding more and more, and as my wife’s late father once said, “there is no such thing as bad weather, just the wrong clothing.”
Congrats to OHSU for setting such a high bar for bike commute programs in the region. There is nothing like paid parking and subsidized alternatives to shift the mode split. Meanwhile on Swan Island, Portland’s premier industrial area, parking is given away free.
Who says we are short of industrial land!

It shows that people bike not because they are better humans, but because biking is the most convenient (and fun) mode of transportation. People in Europe bike because car driving is expensive, parking is scarce, streets congested and distances are short. I bike to OHSU because it’s cheaper, more flexible and slightly faster to bike. As the waitlist for a parking permit is 5 years, driving means I have to get in line for a day parking permit, pay 11$ per day to park in the boonies with a walk across campus equal in time to my bike ride from home. Bus is ok if I manage to catch one of the few direct express buses. As my bike ride is only 3 miles, biking is faster most of the time. But that also shows that it’s not enough to incentivize biking, you also have to desincentivize driving by making it expensive and inconvenient.
Interesting that temperature keeps people from biking. In my case it’s heavy rain (1 inch/day plus). But maybe that’s because I have enough hills on my ride on Terwilliger to keep me warm.

As a former OHSU cyclist my favorite time of year to ride to work was winter because I didn’t have to share the waterfront with all those pesky warm weather lovers! :>)