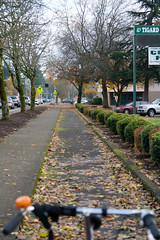 Is this a cycle track?
Not quite.
(Photos: Will Vanlue)

You may not think the city of Tigard (about 10 miles southwest of Portland) has anything in common with Amsterdam or Copenhagen.

The latter two cities are world-renowned for their bicycle facilities while Tigard is known mostly for its freeways and shopping malls.

But there is one thing Tigard has in common with Amsterdam and Copehnahgen: a paved, grade-separated path next to a sidewalk, which you might even call a “cycle track”.

If you’ve ridden your bicycle along Durham Road between SW 85th and 92nd Avenues you may have seen a double sidewalk, of sorts, in front of Tigard High School. One half is cement, the other half is asphalt.

Although neither is a dedicated bikeway, the asphalt path bears a striking resemblance to a traditional cycle track: it’s separated from the street and motor vehicle traffic, it continues at an even grade (without dipping or rising) across driveways, and it is a few inches below the level of the sidewalk. 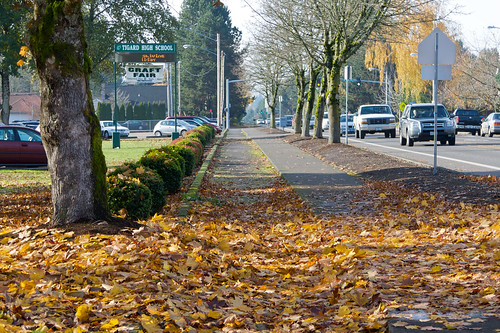 This small section of pseudo-cycle track highlights both the potential for world-class bicycle facilities in the suburbs, as well as the coordination needed when dealing with areas controlled by different government agencies.

“Although this path isn’t technically a “cycle track” it does spark the imagination as to what could be possible with a little creativity and coordination.”

In much of Washington County it’s very difficult to get from A to B without traveling along a major arterial road or freeway. The alternative is to ride on off-street trails and multi-use paths (MUPs). These trails usually wind through parks in a serpentine fashion and are far less direct than the straight lines of major arterial roads. Paths aren’t installed along the same routes as major arterials, in part, because of a perceived lack of space.

Clearly, though, there is plenty of space for the additional asphalt path along Durham Road. 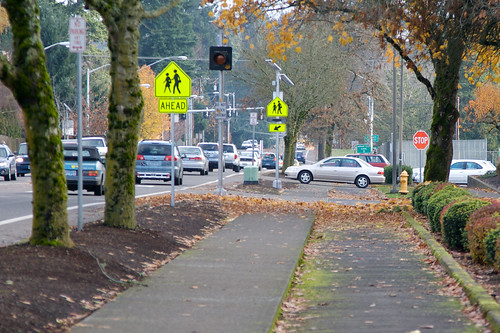 There are no markings at driveway crossings along the path outside Tigard High School and cars frequently enter and exit the school’s parking lot. Some paint on the pavement could turn a simple path into a safe facility for students and residents traveling on bicycles through the area.

I wanted to learn more about why this separated sidewalk was installed along Durham Road but I ran into one small problem: nobody remembers.

No one I contacted at Tigard High School, Tigard-Tualatin School District, or the City of Tigard could tell me for sure when the asphalt path was installed, nor why it was installed a few inches lower than the sidewalk.

Two Senior Engineering Technicians with the City of Tigard helped me confirm the path was installed sometime between 1960 and 1989. They explained that the asphalt path crosses between property controlled by the City and the school’s grounds and that it could have been installed by the City when they repaved Durham Road, by the Tualatin Hills Park & Recreation District (or another agency) during the renovation of the swim center next to the high school, when the school’s parking lot was repaved.

The path also could have been a product of more than one of those projects, evolving and growing over the 30-year gap between available maps and detailed records. 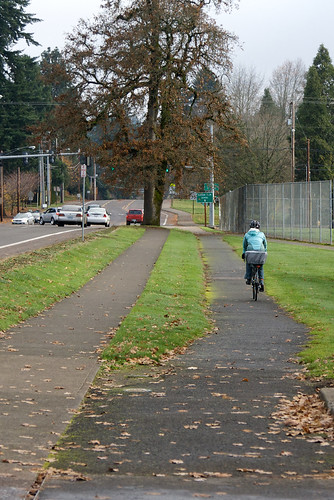 Although this path isn’t technically a “cycle track” it does spark the imagination as to what could be possible with a little creativity and coordination. Perhaps one day this humble double-sidewalk will be seen as the godfather of a network of suburban cycle tracks. A guy can dream can’t he?

With the bike lane on SW Durham, I’ve never ridden the sidewalk there… I’ve never seen that before. Now I’ve gotta go and take a look for myself.

Me, too. I just rode there on Saturday, and I didn’t even see it. The bike lane on Durham is pretty good, but the traffic is heavy and fast. If I’d seen this path, I’d have ridden it!

Durham already has a bike lane its entire length.

I’m sure it wasn’t a bike path, but more likely just a widening of the sidewalk due to high usage in front of the high school. Ensures students don’t walk on the roadway.

Get’s pretty busy right in front of the school at end of day but thins out as students head cross Durham to head up Hall, 88th and 87th.

Back in the 60’s and 70’s Washington County was actually at the forefront of bike innovation in the region. I’ll have to dig up a paper I did on them a few years ago but I seem to recall this was one of the projects. A few of the sidepaths and easements in Beaverton are also a remnants of that program.

I’d love to see what you find! Thanks for taking a look.

The third photo illustrates what I consider to be one of the significant problems with the separated sidepath: motorists must block the path to get to an appropriate position to see motor vehicle traffic on the road.

Motorists are not very good about looking for pedestrians on the sidewalk. The side paht with faster moving cyclists will be even more problematic. I think it will be difficult to train motorists to stop at the path before moving up to stop again at the road where they can see. Yet another problem is that for motorists turning from the major street across the side path, the cyclists is far out of the motorist’s sight line.

In my opinon, these side paths, by whatever name, are only appropriate where there are very, very few intersecting streets or driveways.

There’s no question in my mind that I’d ried on Durham road with the lane rather than this side path. Just my 2 cents.

I’m with you: with the tricky crossings on the path I almost always ride in the bike lane. The way the driveways are designed, and with the trees and signs on the road, it’s hard to see traffic on the road as you leave the parking lot until you’re nearly in the road.

The only way this path could really be a viable bikeway (even when traffic is heavy during school hours) would be if they redesigned the driveways, either adding ground markings or completely reconfiguring the entrances.

Photos 1-3 shows yet another problem with grade separated bicycle facilities like this one: leaves. It looks like someone blew the leaves off of the neighboring driveway onto the path.

While that does happen sometimes (leaves blown onto the path) the pile in the photo is there because it’s under a tree.

What could be done with the path is make it and the sidewalk curve in before the driveway by at least a car width, allowing someone in a car to wait to enter the street and not block the sidewalk and bike path.
For example:
http://www.livestreets.ru/en/wp-content/uploads/2011/02/34.jpg

Many roads in the suburbs are “cycle track ready” when you consider the treed buffer zone that often exists to separate the traffic lanes from the sidewalks. The space is there – it takes money to move the street lights, change the grade and curbs, and put in pavement. A great example is Millikan Way from TV Highway to Murray. This is the main route to get from the south to the Beaverton Creek MAX station but there are actually no bike lanes available to get to this station. The same problem exists at the next two stations, Merlo Road and Elmonica.

I talked to couple of long time eomployees who once worked in engineering at the City of Tigard and they were able to provide me with the explaination as to why “cycle track” occured. I cannot upload the supporting documents as they pulled up the plans, but below is their explaination

“At one time the high school had head in parking along Durham Rd. The slope of the parking areas followed the crowned cross section of the road. When improvements were done to Durham Rd. in 1983 a curb was installed and depending on the station there was either a A/C or concrete sidewalk and in some cases both constructed below the curb.”

I heard the same thing from them when I dropped by City Hall the other day. At the time they couldn’t find any photos or documents to show me though; it’d be cool to see what they found.

I think I have actually ridden that little stretch of asphalt but that was before the path into Cook Park from SW 85th Ave was completed. Beaverton has built an actual cycle track on SW 155th Ave next to Sexton Mountain Elementary School.

I’ll have to get up there near the school and have a look at the cycle track sometime!