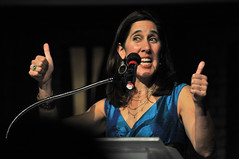 “People have this myth that people just woke up one day and everyone was biking and there were bike lanes everywhere… it didn’t happen that way. It was hard work that got Portland to be Portland,” Birk told the crowd.

“Vancouver has to make it uniquely Vancouver. Don’t be Portland, be your community.”
— Mia Birk

Telling the crowd she wanted to avoid discussing the controversial Columbia River Crossing project, Birk briefly pointed out the cost difference between freeways and bike projects. “Everything Portland has done cost less than one mile of urban freeway,” she said.

According to Birk, a former City of Portland bicycle coordinator, three things are required for bicycling to succeed in a community:

During the presentation’s Q&A, the crowd asked Birk for advice on a wide range of topics from getting street sweepers to clean bike lanes to obtaining funding for bike projects. But as much as Birk offered advice on how to tackle Vancouver’s bike issues, she encouraged Vancouver to find its own identity. “Vancouver has to make it uniquely Vancouver,” she advised, “don’t be Portland, be your community.”

After the presentation, Birk said Vancouver’s next step should be completing its bicycle path network and continue to work on its Downtown Vancouver Growth and Transportation Efficiency Center Plan (PDF) (known locally as “the GTEC plan”). According to City of Vancouver Senior Planner Jennifer Campos, Birk’s company, Alta Planning and Design, has just signed a $70,000 contract to manage the public outreach effort for the GTEC plan. When asked about a possible conflict of interest between her community advocacy for bike projects and her company’s contract work, Birk said no such conflict exists. “Most people have a job that feeds their bellies or their souls, I’m honored to have a job that does both.”

I’m grateful for the work that Mia has done for PDX. Also, I’ve enjoyed hearing her speak in the past.

But I’m confused by this article. Do you have any idea why she would start out her speech by telling the crowd that she doesn’t want to discuss the Columbia River Crossing monster?

Birk didn’t open her speech with the CRC, she just touched upon the cost of bike projects vs urban highways and commented that she didn’t want the presentation to become a “referendum on the CRC.” The debate surrounding the CRC is well known and I think it’s understandable if Birk wanted to avoid opening that can of worms during her presentation.

One other thing that is needed thing to get create a successful bicycling community is a source of stable local funding. Relying on the State or Feds is not going to get it done.

(note: I am pro-helmet in an urban environment, but anti-mandatory)