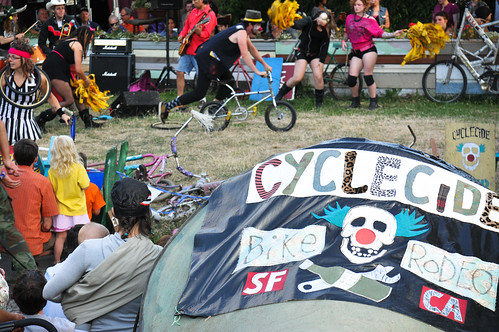 San Francisco-based Cyclecide and their “heavy pedal bike rodeo” made a stop in North Portland last night. The show was the final stop on a multi-day tour they took with our beloved Sprockettes.

With family in town from near Boston, Massachusetts, I figured it was a perfect opportunity to show them a bit of Portland flavor. On display were clown-bike-rodeo hijinks (which brought back fond memories of the now defunct Alberta Street Clownhouse), freak bikes (tall, tiny, and just downright strange), and the creative and interesting people who ride them (my 14-year old nephew is now dreaming of making his own tall bike).

One of the highlights of the night was seeing all the young kids try the various tall bikes and freak bikes in the Cyclecide fleet. After the riding and a Cyclecide performance, the crowd was treated to a performance by the Sprockettes.

Check out more photos below… 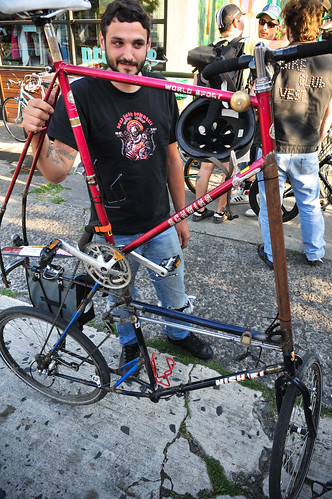 This is Nick, a.k.a. “Guardrail”. He rode to Seattle and back on this tall bike over the weekend and rode up to Mt. Hood on Monday. 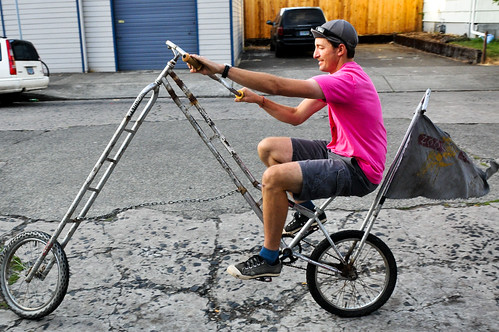 Hard to resist trying the bikes out for myself. 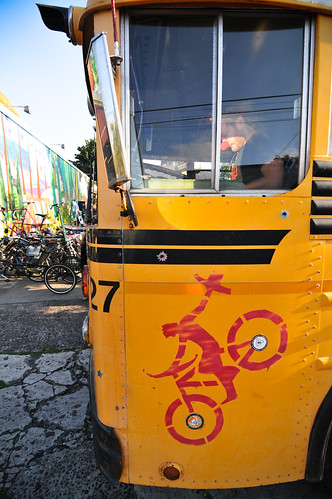 The Cyclecide crew rolls in a huge yellow school bus. 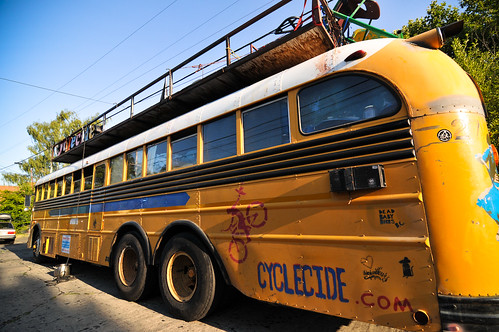 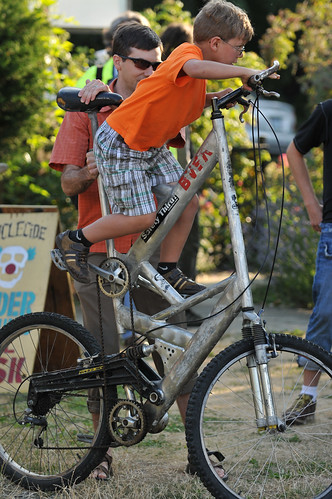 It’s all about the children. 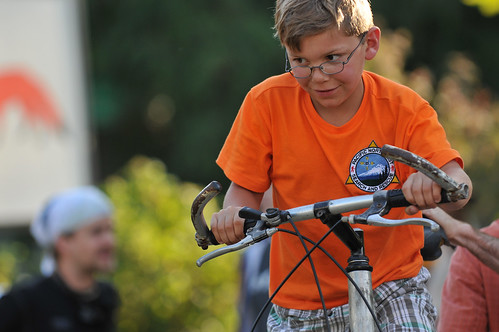 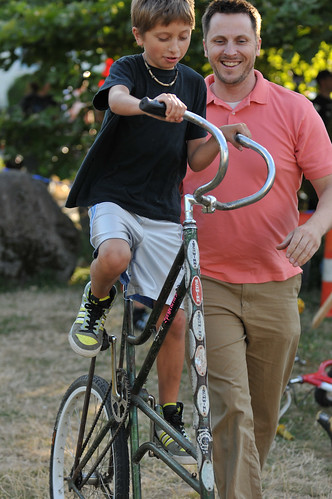 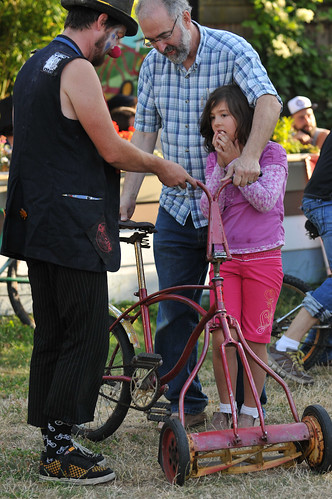 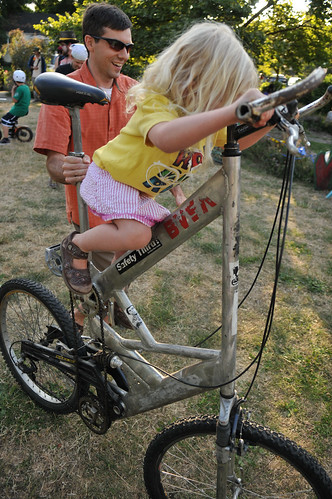 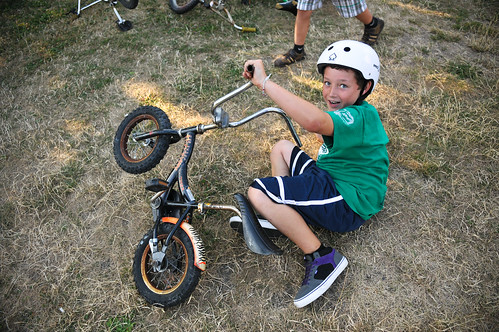 My 10-year old nephew Jeffrey Maus will have some great stories to tell his friends back home in Merrimac, Massachusetts. 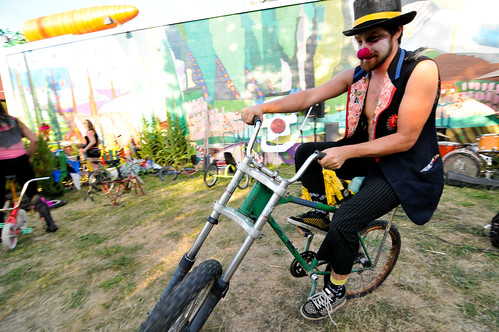 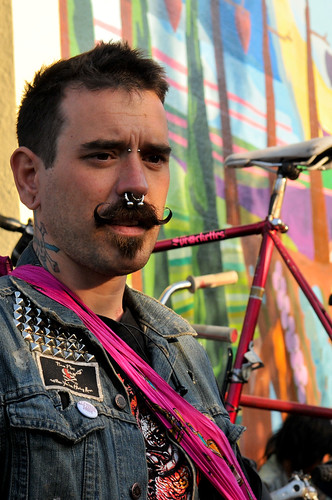 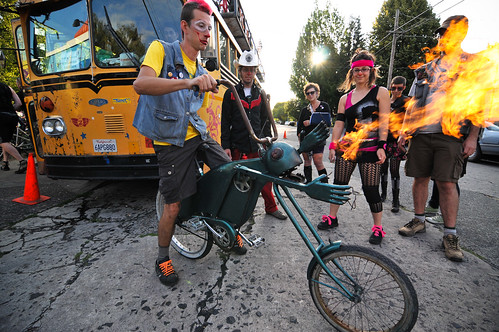 This fire-breathing insect bike is known as “La Chupacabra.” 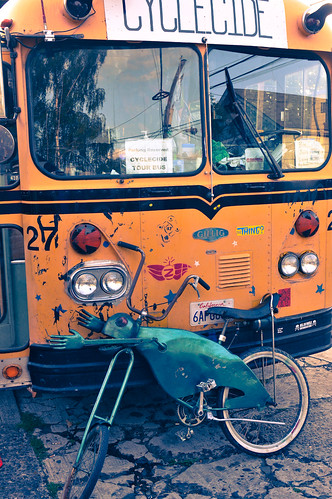 It looks tame, but…. 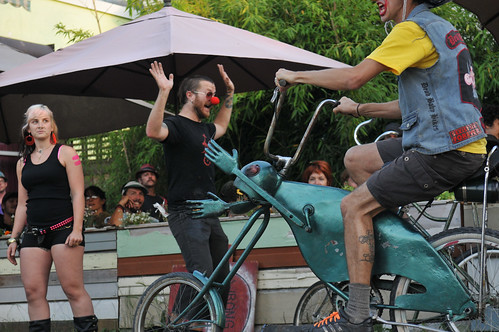 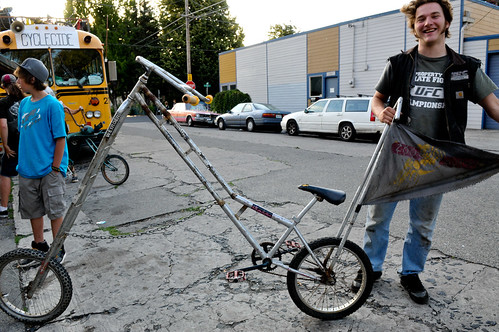 Twitch and his creation, which he says is one of the older freak bikes in town. He built it in 2003. 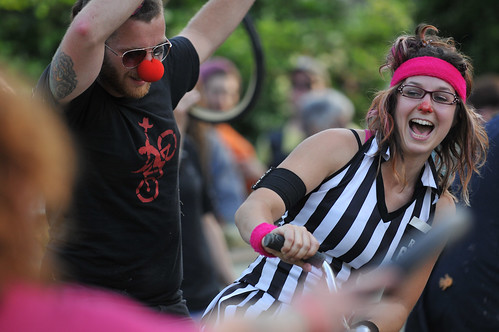 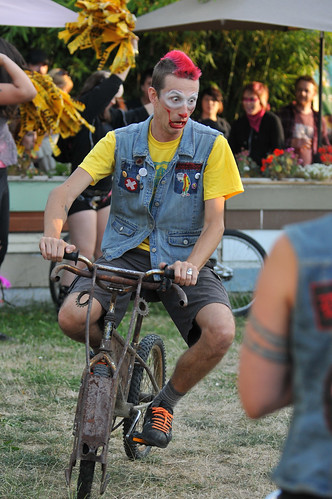 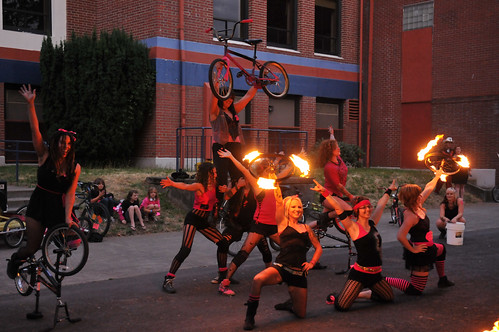 The Sprockettes and fire — two great things that go great together.

I fear for our civilization.

Meh, it’s not my scene but at least people are having fun doing something they like.

was carless
Reply to  k.

I bet those kids had the time of their lives! So much more fun than the carnivals I went to as a kid.

I’m glad to see that at least some people are doing their own thing, and not particularly concerned about participating in modern American consumerist civilization.

That was an awesome night!
GO CYCLECIDE!
The sprockettes were great!

Great fun, but does it need publicizing? I’m growing tired of “celebrating” the fringe aspects of bike culture. I feel it only reinforces the idea that biking IS weird, and it is only done by weird folks.

I see it as more of an effort to include everything about biking and the people who do it. Including those on “the fringe”.

Really – you are complaining about the publicizing of a free (completely voluntary donation) public event? Think of this as a circus or a free dance performance that happens to involve people-powered contractions– It was a lot of fun. You take bikes too seriously…

Man, dirt, can’t things just be about having a good time? And kids? And clown noses?

Plus, the (quite participatory) crowd was full of “normally dressed” folks with families. Come on down next time!

ahh I missed this 🙁 love to see such bike culture

Jonathan, thanks for the pic of my son Max! (black-shirted tall-biker).

Reprint of my comment on yesterday’s promo for the event…

Kinda let down when I showed up at 6 with my kids, only to learn that the performing would *start* at 8:00, rather than start at 6 and *end* at 8. We stuck around for about 45 minutes when they let the kids try out all of the groovy freak bikes, which was cool, but 2+ hours was too long for 3 kids to hold their water [waiting for the show to begin] in such a small space. Hope it was a good show.

I hear you about the timing and kids. I had all 3 of mine there last night too. We’ve just come to expect that sort of thing at these events so I guess we weren’t surprised. Hope to see you out again at other events.

Yeah, we dig the Sprockettes, and made a quick decision to delay dinner, run out for an hour of entertainment, before returning home again for dinner. When we realized, on arrival, that dinner (waiting on the counter back home) would be *way* delayed, our peckish condition got the better of us.

i’m sure waiting around with kids isn’t the easiest, but for this particular show, riding the freak bikes WAS part of the performance! i hope you can try to see it that way because a lot of these events purpose is to promote the love and respect of bicycles by having fun things to do, and the ladies dancing is just the icing on the cake.

thank you for the support! the show was great!

Thanks–riding those bikes was a fun opportunity for the kids, and a nice surprise 🙂

that lawn mower bike is awesome. not a bad business plan around here either.

I love the freak bikes. I’m thrilled to live in a place with such a wide variety of bike culture. Even including stodgy cyclists who shun the freak bike “fringe”. Frankly, I’m much more concerned about aggressive a**hole cyclists giving us all a bad name (the few who blow through stops without even slowing down).

I agree – lawn mower bike = awesomeness. Suggestion: the back tire should have gnarly nubs for aeration. Forget goats.

I wish I was there! I am now in Morristown, New Jersey house-sitting for my brother and caring for my mother.

We had a ball, watched Cody have fun on the tall bike & then I asked sister if she wanted to give one of the bikes a try. “YEAH”, glad she wasn’t afraid, being a bit younger and a learning rider. All things with Dad go well! Thanks for sharing the bikes, music & dancing!