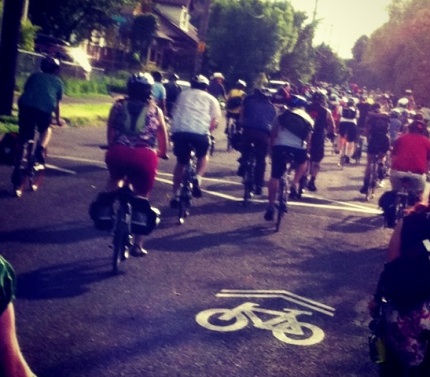 The ride wound from Northeast Portland to Overlook Park via the Mississippi District. At the park, bike-based food vendors awaited and a picnic and more fun was had by all.

Read the ride recap below submitted just a few minutes ago by Harlow:

“Wow. Way to kick it off, people. About 3-500 people showed up in fabulous costumes (my personal favorite: Safety Man, with a neon yellow shorts romper and neon yellow sneakers, and a big smile on his face the whole time. There was also a witch! And Elly B in a fabulous dress, though we wondered how she could ride in it…). The Taco Pedalers had showed up to sling some awesome tacos for the hungry masses before the ride departed.

The Schwinn Belligerante gang led the ride, with regular hoots and hollers and rounden’ em ups, and by the way, at the end they hauled up the Weiner Wagon —a giant wagon with a grill on it, roasting their homemade sausages.

Sound systems included a Bullitt sound system and a small barbecue made into a sound system. Some clouds had covered the formerly blue sky, but nevertheless we enjoyed warm evening light as we rode off into the west for five miles, detouring via Alberta and Mississippi to wave to the beer-drinkers en route. Bells, cheering, yelling, the de rigeur kickoff ride stuff. It was pretty amazing to be told at the front of the ride that it stretched 6 blocks back! When we took Mississippi from Fremont to Skidmore, there were people already on Skidmore as people were still turning off Fremont.

There the Taco Pedallers were awaiting us again, along with Eatin’ Alive’s pedal powered vegan-gluten-free yummy treats cart, and Icicle Tricycle with frozen goodies.

Hula Hoopla had pedalled a dozen hula hoops on her amazing hula-hoop-conveyer-trailer and she did some awesome hoop dancing and tricks and shared hoops with everyone! The kids of all ages jumped on the see-saws and swings at the adjacent playground.

The clouds lifted from the horizon just in time for an amazing sunset over Forest Park. It was just lovely to see everyone chilling out and enjoying the evening together after a mellow bike ride! Some people were playing badminton, some were playing frisbee, others were doing pullups on the bars, some brought their own BBQ and were grilling up food, the Weiner Wagon was smokin’, friends were puppy piling on picnic blankets, and at one point a group of us corked a sound system to prevent it from leaving by having a dance party around it…” 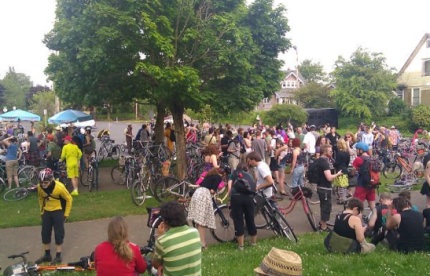 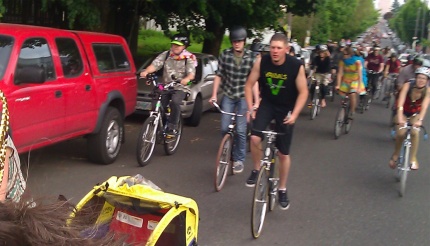 The Belligerantes showed up in force. 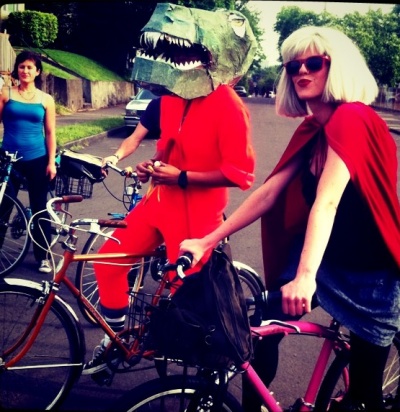 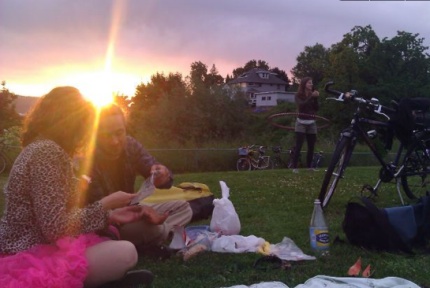 And it ended with a picnic and a gorgeous sunset.

This was lame. The parade didn’t follow traffic signals and blocked off traffic for some time on Interstate for a few minutes until the MAX train came through. I don’t ever wonder why the general public can have a bad taste in their mouth in regards to cyclists. It’s embarrassing.

Don
Reply to  Phil B

How do you think parades work?

If everyone were to stop and wait at each light, you’d have at least a dozen separate small parades stopping and going for a mile behind the start. It’d be ludicrous and impossible to control.

Lapis
Reply to  Phil B

Not all of our crossings had options for traffic to turn away from the route. At our final turn, out of a neighborhood and onto Interstate Avenue, I encouraged drivers to turn left out of the Southbound lane if they could. An inconvenience, yes, but most didn’t mind waiting a few minutes as the parade of smiling, happy cyclists went by.

Esther
Reply to  Phil B

Phil – I encourage you to come to Shift meetings and organize the Kickoff Ride for next year if you see ways it can be improved! If you would like a police escort, that will also mean formally permitting beginning and end locations that will hold up to 500+ bikers, working with the police to determine a route, and possibly some financial investments.

BTW- as ride leader I asked the Belligerante gang to hold up at Interstate and not cork the intersection, due to MAX (it takes 2 blocks to stop, you know). I had also assigned corkers to all the other intersections where there might be a conflict. But when they went through the intersection, some drivers tried to come through the parade with the cars, and a rider decided to cork them for the safety of the riders they were approaching.

MY Favorite bike ride of the year!!! And i rode my first tandem in Portland. For those on facebook, here’s some I put up from the ending location at Overlook Park. Fantastic route Esther, lots of parading and such a good time. Hundreds of folks hung out on their porches waving and smiling, people stopped in cars made videos on their phone, folks at all the eateries on Alberta and Mississippi loved the parade of bikes of all kinds, people of kinds, fun costumes.. It was like SUMMER IS HERE!

I agree. How dare these “cyclists” ride in such a manner. The ride would have been much better and safer if the police were in force as in years past.

I vote to form a formal comity so that such atrocities do not happen in the future.

Also want to add, the Pedalpalooza kick off ride/parade has had police escorts and permits in the past — but honestly mixing bikes with motorcycle cops wasn’t exactly great either. This year, During the route, we had great friendly corkers who helped the bike ride SAFELY stick together, and keep at a good pace so other folks not in the ride weren’t inconvenienced too long. And from my experience the majority of folks stopped were smiling and enjoyed the random happen upon. Our parade was 5 minutes out of these peoples lives. As far as the Max train crossing.. sounds like people did the best they could to deal with the situation with the train. I was at the back of the ride, but by the time I got to the front, the train was coming, so we stopped.

Personally I think sticking to self corking and not involving police is a preference. As the organizer of the annual Bunny on a bike ride of 100-150 I also do the same. Some people don’t like ‘breaking the law’ when we don’t stop at lights, but it’s safer and more fun and takes less time if we stick together as a ride, and I think it’s okay to make the occasional exception.

I also believe the Kick off parade draws more people into biking than gets people mad about it. Some people just live to be mad about something. And are going to hate you, cars, bikes, the guy on the corner, the weather.

I’m also pretty annoyed that a great post about a Beautiful Event on a lovely Summer day had to start off with all this criticim and complaint. I guess that’s what blogs are for.. but I challenge you to find something good to say about the event.

I was there, it was great! thanks!