If you’re a fan of the Sullivan’s Gulch Mobility Corridor (a.k.a. the Sullivan’s Gulch Trail), than any news from the City of Portland is worth getting excited about (the project has been talked about since 1996!). When complete, the project will result in a five mile non-motorized transportation corridor connecting the Eastbank Esplanade to Rocky Butte and the Gateway District in East Portland.

“… It would be the only exclusive east-west bicycle and pedestrian corridor between Marine Drive and the Springwater Corridor… provide an active transportation route separated from heavy motor vehicle traffic for thousands of Portlanders.”

Yesterday at City Council, the Bureau of Transportation officially accepted a $224,000 grant (which they won from Metro in 2008) to develop a concept plan for the project. With the money now officially in PBOT’s hands, the City has taken some key steps in making the planning portion of the project a priority.

A project advisory committee has been formed and both PBOT and Portland Parks & Recreation (it will be a dual effort, although PP&R will take the lead) have assigned a staff person to oversee the process. A one-sheet has been developed for the Concept Plan process, which gives the community a sense of how PBOT/PP&R are framing the project. Here’s a snip from the one-sheet (emphasis mine):

“The Sullivan’s Gulch Trail would serve as a safe, comfortable, and direct transportation and recreation option for people to walk, bike or roll. It would be the only exclusive east-west bicycle and pedestrian corridor between Marine Drive and the Springwater Corridor…

This trail would link East Portland to the Central City and provide an active transportation route separated from heavy motor vehicle traffic for thousands of Portlanders.” 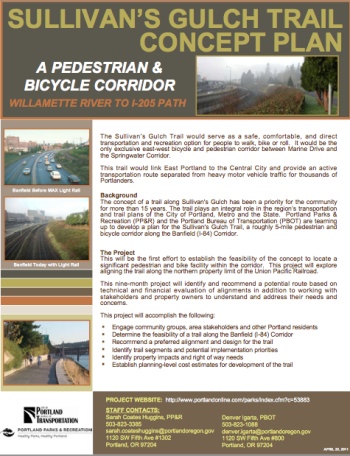 It’s just a flyer… but at least it’s something official!
–PDF–

But don’t get too excited just yet. This current effort is just a planning exercise which is being done to “establish the feasibility of the concept to locate a significant pedestrian and bike facility within the corridor.”

Concept Plan development will be a nine-month process to identify and recommend a potential route, address concerns from property owners along the corridor, and establish some cost estimates for the trail (estimates I’ve heard range from $25-50 million).

If you care about this project, this planning effort is the first time you’ll be able to officially engage, weigh in, and let the City now what you think about it. There’s already a citizen’s group established for the project and we can expect them to be making a lot more noise in the coming months.

While some might be crestfallen at the sheer scope of this project (one reader referred to it as a “long, slow, slog”), it doesn’t have to be that way. If momentum builds,, if a major political figure or community leader throws their weight behind it, if we get our mobility priorities in order sooner rather than later, we could see it come to fruition much quicker.

— For more information, browse our “Sullivan’s Gulch Corridor” story archives, check out SullivansGulchTrail.org, and stay tuned for opportunities to get involved with this exciting project.

Can we please have a separated path and not another multi-use trail that mixes bikes and pedestrians?

I get that, but I will say it seems doubtful that Sullivan’s Gulch will be quite as popular a destination for walkers and joggers as the Esplanade is.

I think you underestimate the number of people that work and live nearby that will see it as a prime morning or lunch walk/run workout.

That said, can’t we just share it like the Springwater trail? Yes, it’s a PITA during peak hours, but I’ve always found Springwater to be an excellent traffic bypass that saves a ton of time – pedestrians or not. I’d love to use the Sullivan’s Gulch trail when it’s available.

Can we please upgrade the Springwater Corridor to a proper cycleway with sidewalks for pedesrian access? It’s not like there’s a lack of room. And it’s not like you really need more than gravel for the sidewalks.

That would be nice, but I think the ROW is very narrow. I would only expect an 8-10ft MUP.

I am wondering how they might connect it to the existing path in Gateway. Or will they just continue to follow the rail line to get us all the way to 122nd?

I’m a little sad about this actually. I see this area as a bit of an inner-urban wilderness, a no man’s land long overgrow by ivy and black berry bushes. It has long been a haven for independent minded homeless folks. I guess bike development is better than other sorts of development.

I’m sure this point has been made before but with all the evidence suggesting that the air within a half mile or so of freeways is harmful to the heart and lungs, this seems like the worst place in the city to put an east west path for daily bike commuters. I would think the gulch area is especially good at trapping smog and exhaust particles during rush hour. If you’re looking for asthma, a heart attack or stroke, though…

I’m with you 100% on this point. I’ve brought it up each time this project was mentioned here, but few others seem to care. I would likely avoid the path altogether, choosing to fight it out with the rest of the traffic on the less polluted surface streets.

The was a study in the Netherlands that said your exposure to pollution while on a bike is still better than it is for all the people in cars.

The study found increased pollution exposure for cyclists but that didn’t outweigh the benefit of exercise:
“Principal findings. We quantitatively compared the health benefits from physical activity with the risks related to air pollution and traffic accidents between cycling and car driving for short trips, distinguishing the individuals who shift modes of travel from society as a whole. Estimated inhaled air pollution doses were higher in cyclists. The risk of a fatal traffic accident is higher for cyclists than for car drivers. Substantial benefits of physical activity have been demonstrated, including decreased cardiovascular disease and mortality.”

Chris I
Reply to  birdsong

I’m pretty sure that riding near any large population of cars is bad for you (Barbur, Burnside, Sandy, Powell, etc). It’s not like the emissions magically disappear when you get down to 4 lanes… Draw 1/2 mile zones around our freeways, and 1/4 mile zones around our large arterials and downtown streets, and you’re looking at most of the city being harmful to commuters (not just bikes, all drivers breath it).

Encouraging cycling with projects like this will benefit everyone’s health.

John Lascurettes
Reply to  Chris I

And that was the study I was referencing above.

If you were that concerned about air pollution, you’d live as a hermit in the mountains to start with.

The I-84 area has much more traffic volume, a higher number of trucks, trains and idling of cars along with with a geography that traps all that in so it’s not the same as a surface street. I’m not saying emissions magically disappear a half mile from freeways- it’s obviously a graded risk- but it’s clear that living near freeways significantly affects health, more so than large surface streets. The study referenced above is looking at driving a car versus biking, not biking right beside a freeway versus biking on surface streets.

Not exactly the most scenic or enjoyable route, with Max trains, freight, and I-84 traffic whizzing by, (and I wonder about air quality, too) but it’s a needed route. How will people get to it from the other side of I-84? Will there be any additional access added as part of this? Or will access be only via existing overpasses?

I like this idea quite a bit as I just recently moved into the Madison South area and commute downtown for work everyday. Right now only by the Max, but in another month or so, when the weather gets a little nicer… all by bike.

I think this trail would be primarily of interest to bike commuters, but it has to be available to pedestrians as well, and right-of-way width is certainly something that the study has to address. The location near I-84 has some drawbacks, to be sure – it isn’t going to be a pleasant nature ride, although since we’re thinking long term, as more vehicles switch to electricity the pollution problems (including noise pollution) should abate. It is planned to join the I-205 route at Gateway, but then eventually connect to the route that starts up again at 122nd – which is going to involve getting over the railroad tracks. The current study isn’t looking at anything east of Gateway, but that will come in due course.

Why do pedestrians need access? The neighborhoods adjacent on both sides have sidewalks on practically every street. Bicycles don’t have such an advantage in this area.

I am not against this and would certainly use it if it were there. However, with all the good East/West bike blvds. really not that far away (ie. Tillamook, Ankeny/Davis) the money could be spent elsewhere. I think a path along I-5 south of downtown or a cycle track on Barbur would be great as SW really doesn’t have any low traffic thoroughfares.

We really deserve a better facility than SGP.

While a non-motorized, continuous and separated E/W corridor is a great idea, it’s dumbfounding that users:
1) inhale a significant amount of pollution;
2) listen to the voluminous, continuous drone of autos;
3) be constricted to a narrow path.

I can see SGP function as a bike highway, but not much else.

I’d rather see NE Glisan put on a road diet.

I vote for a nice sinewy ribbon of single track.

This trail sounds great, the one thing I would really advocate is somehow buffering the sound of all the traffic. If you’ve ridden on the bike path in beaverton on 26, or the path across the i205 you know the unrelenting sound and visuals (I swear I get vertigo on 205) of traffic going by at 60+ makes biking pretty unenjoyable. If this trail gets built it needs to get built right, not just cheaply. But as the the potential only E/W corridor to swiftly get from out east to the inner city it would be most likely get lots of use.

Bike friendly streets are nice, but living in NYC and having most my bike commute on a greenway is pretty eye opening to how very awesome it is just to ride with only pedestrian and bike traffic.

You are aware that the idea of the I 205 trail and the Sullivan’s Gulch project has transportation, not recreation, as it’s primary concern, right? That said, the least pleasant portions of the I 205 trail are behind sound walls where the wind out of the gorge drives all the trash into the southbound lane. I’d rather it gets built right, drains right and maintained right (go ahead…find the lane markings on I 84 east of 205, or even the sections of 205 that have gone some time without a repave!) than waste perfectly good money on aesthetics if it comes right down to it.