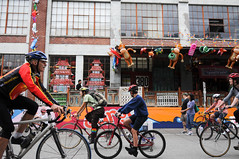 The City of Portland has five Sunday Parkways events starting next month and the routes are now public. PBOT has also launched a fundraising effort on Kickstarter to help bridge some gaps in their budget. 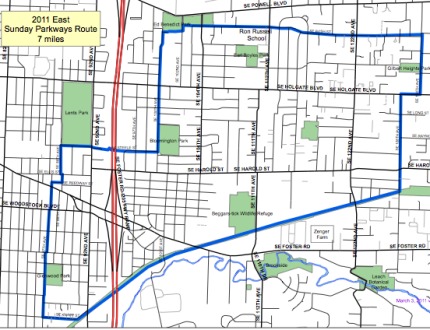 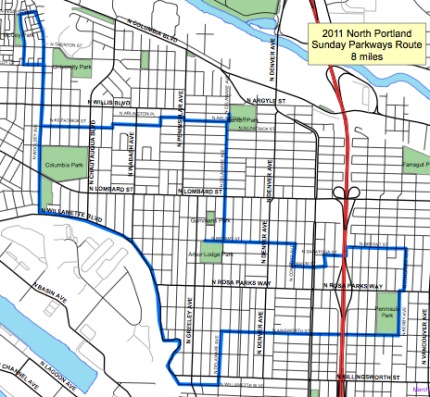 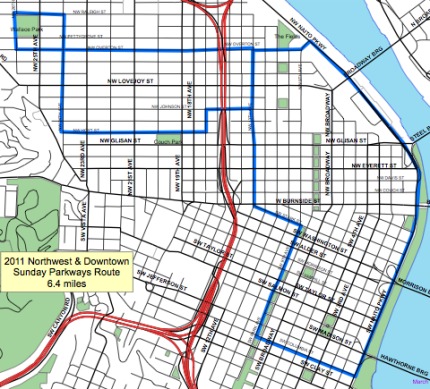 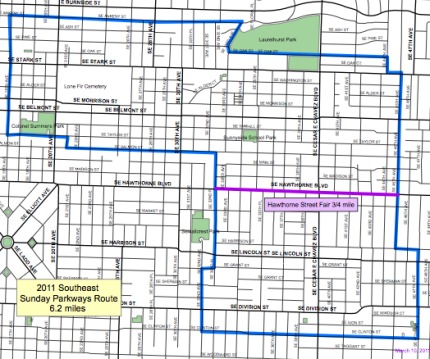 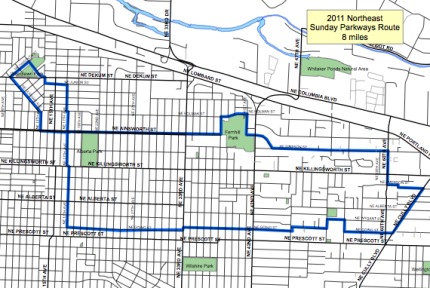 Linda Ginenthal, the PBOT Program Manager for Transportation Options (and Sunday Parkways star) says her total budget for all five events is $482,500. That money will come from a mix of sources, including the City’s General Fund ($170,000), grants ($100,000), title sponsor Kaiser Permanente ($100,000) and the rest from individual contributions and vendor fees.

To kick off the fundraising effort, Ginenthal has launched a Kickstarter project. The goal is to raise $5,000 by May 24th (so far they’ve raised $215 dollars from eight “backers”). Ginenthal says the grassroots fundraising is more like “friend-raising.” “It shows this is a community supported thing not just with our wheels but with our dollars.”

Totally bummed out that the North Portland route has changed. It used to come down my street and I’d have a big bbq on my front lawn. Now it misses my street and that means an end to my house party on the route.

But it does mean that I’ll get to participate in my neighborhood Sunday Parkways event this year since I won’t be entertaining guests all day long.

I’m excited to see that the NE one goes right down my street (Emerson). Dave and everyone else is invited over for a BBQ at my place!

Wow, 2 big upgrades — even though the number of routes is not increasing this year, it’s growing in “stature”

1) The N PDX route is now taking Willamette Blvd all the away around the Bluffs. Closing a major street to do it. I like it! Last year there was the section on the quiet portion along the bluffs, then it doglegged back into the neighborhood.

2) The downtown route is greatly expanded. Park blocks (the Park Blocks always need a little more love) and, closing Naito Parkway through most of downtown and the inner NW!

These two moves will really “open up” the streets so the masses can really ride, and enjoy a car-free city, not just car-free neighborhood streets. With great waterfront and blufftop scenery.

Thanks PBOT, and I hope everyone brings out their friends and packs the streets.

I’m all signed up and ready to superhero those intersections out!!

Glad to see the support my employer (Kaiser) gives this event.

The NE PDX route passes right in front of my house on my birthday. Expect beer and goodies!

In the eternal words of Beavis and Butthead, “We’re there, dude.”

Sweet! Just volunteered to help setup for the East PdX. Might add another shift later if it doesn’t look like they will get enough volunteers. Last year was the first time I got to enjoy a Parkways event and it was a blast to have the route be 2 blocks from my house.