‘The Bicycle City’ documents the power of bicycles 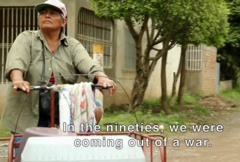 Still from The Bicycle City.
– Watch trailer below-

We all know the myriad benefits of bicycling (whether you ride them or not), but it’s not often that the power of this simple invention to fundamentally change lives is told by people who aren’t advocates or politicians.

Greg Sucharew is a documentary filmmaker working on a project to do just that.

Greg got in touch with us a few days to tell us about his current project, The Bicycle City (watch trailer below). The film is about the transformative power bicycles have had on the impoverished, war-torn town of Rivas, Nicaragua. Here’s more from Sucharew:

“I’m hoping to generate some grassroots support for the project and raise awareness of the fact that bikes can indeed be a realistic solution to the transportation problem – be it here in the US or half way around the world. Given the public’s rising awareness of environmental issues and the controversy that is currently brewing in places like New York City over bike lanes, I think my film, The Bicycle City, shows the importance of the humble bike in an ever more carbon-loving world.”

I’m sold. Watch the trailer below and you will be too…


The Bicycle City. Trailer from Greg Sucharew on Vimeo.

You can help support this film by donating to the project on its Indiegogo site.

Rivas is a amazing city. Their are tricycles everywhere! Selling juices and food, hauling cargo and furniture, and tons of Pedicabs! The pedicabs are organized into a cooperative by the government. They have built a super wide cycle track along the main highway through town. This cycle track is used as Bicitaxi Transit route!

Check out this set of photos of Pedicabs and Tricycles in Rivas and Leon, Nicaragua:
http://www.flickr.com/photos/portlandpedalworks/sets/72157625276866345/