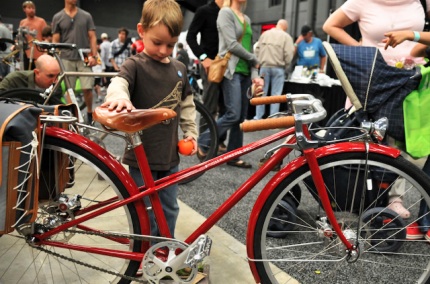 “This is what I wanted to show you!” said this little guy.
(Photos © J. Maus)

A pleasant surprise here at NAHBS has been all the families in the crowd today: Moms and dads pushing strollers through the packed aisles and little ones running ahead, bounding through the booths. While there’s plenty of eye candy for the little ones, there aren’t actually many bikes built for them — unless they were lucky enough to happen upon the Vanilla Bicycles booth. 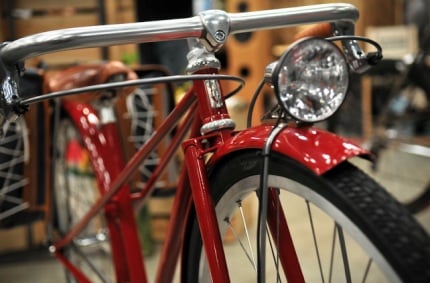 Sacha White, not yet 40 years old but still considered one of the fathers of the handmade bike world, is showing one of his kids bikes. He’s made two other kid bikes, both of them for his daughters — Cybelle (11) and Delilah (8). The one on display at NAHBS was made for the Museum of Art and Design in New York City and was one of several handmade bikes that were featured in an exhibit, Bespoke: The Handbuilt Bicycle, that ran from May to August of last year (White co-curated that exhibit). 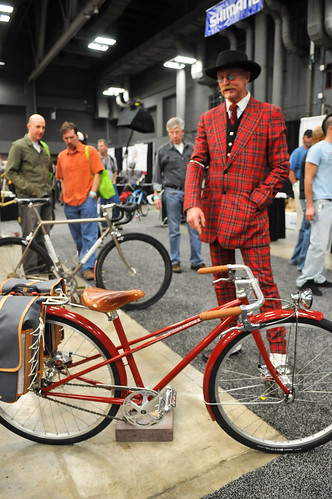 Even Gary Fisher, a many who knows bikes, had to take a second look at this beauty.

“I tried to get Delilah’s bike for the museum, but she didn’t want to let it go,” said White. “She kept asking, ‘Dad, when can I get my bike back?'”

White’s kids bike is based on 26-inch wheels and a frame that’s sized for a typical 7 year old. The idea, White says, was to build the bike with parts that were right at the limit of how small they could be relative to the wheel and frame size. That way, the rider could grow with the bike (the bike is made for kids between 7 and 12 years old).

Far from just a one-off show bike made for a museum exhibit, White sees beauty in his kids bike because of its utility and function as something that can be passed down within a family. “It’s a smart design, because it solves a problem… And it rides really well.” 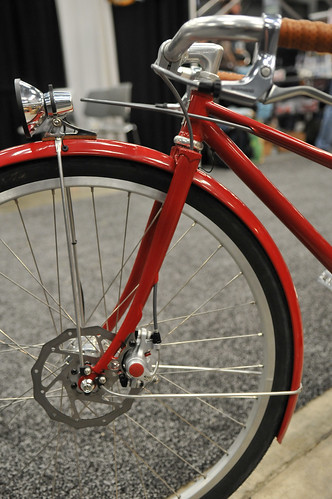 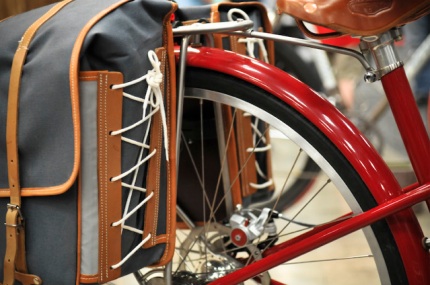 White says his inspiration for the design and the relatively large wheels came from World War II era motorcycles and roadster automobiles. “Many adults have said, ‘I want that bike’, but they wouldn’t get the same, stretched-out, roadstery feel.”

Other nice features of the bike include Gilles Berthoud panniers, disc brakes, and an upright riding position. 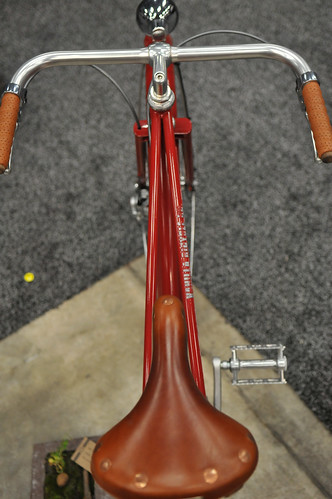 White says this bike is currently for sale. He’d also like to build kids bikes in production batches. Stay tuned… If that does happen, I know a lot of parents who will start saving their pennies.

A really nice bike indeed and good to see some non-crappy kid bikes out there. I’m not a big fan of the roadster look and would probably have preferred smaller wheels, but I’m sure some people will love it. Minor areas of improvement: the wiring for the front light is an eyesore; a functional kid’s bike must have gears; and I’m wondering if those brake levers will work well for kid-sized hands.

That’s not light wiring, it’s a huge loop of cable housing for the brake lever. Agreed it looks strange.The brake levers do look like they would be hard for small hands to reach, but most quality levers can adjust that distance. Gotta disagree on the gears. When I was 7-12 years old I would have destroyed gears in a heartbeat. Single geared BMX bikes with hand brakes took tons of abuse and I never even thought about gears until I was fully grown and wanted a Mt. bike. The lack of gears may make this bike obtainable to the upper-middle class too instead of just the wealthy. It’s a cool bike for a showpiece, but not really feasible for most parents and not at all what I would have wanted as a child.

Nope, I was indeed talking about the light wiring (black cable ziptied to the upper fender strut). The brake housing i don’t really mind.

About gears: Obviously you’d install an IGH which is pretty much indestructible. I was very happy about my three gears when biking back up the hill from school.

i’m with you jm. i wanted and only rode bmx bikes. one gear. it got me everywhere i needed to go. i rode bmx well into high school. this bike is really cool and will get little timmy from home to school, but dang, it just doesn’t look like any fun to me.

Your comment reminded me of a memory: when I was 12 years old and my lanky legs grew too long for me to comfortably fit a BMX bike anymore, my parents got me a ladies’ three=speed bicycle, full-sized, with 26″ wheels. I was plenty tall enough to ride it but I hated it. I stripped off the fenders and chainguard, ditched the front brake and tried in vain to turn it into the BMX bike it could never be. Then I proceeded to cheerfully destroy it on the berms and moguls that ran alongside the creek behind our apartments. It took me about three months (after which my parents relented and found me a used BMX cruiser).

beth! i love it! thanks for that. i’m having a crap evening and that turned my frown upside down (a little, for a moment, but a much needed moment).

Looks awesome! I’d love to have one for my 5yo daughter but given the Vanilla waiting list, I would have had to put down a deposit before we conceived her.

nice! is he gonna be at the Portland bike show?

Nice bike, it would be for a sophisticated well behaved child, the type who likes to color in between the lines and eat all of his or her vegetables. This bike would not have survived my childhood.

Pretty fabulous. Every kid deserves one of these instead of a seat in an SUV…

I’m with Ted. I’m sure that this is a very expensive bike, but if you compare it to all the costs of driving your kids everywhere in a large motor vehicle, the custom kids’ bike is probably a bargain.

Does anyone know what kind of saddle is on this bike?

Looks like a Brooks Team Pro S Chrome to me. You’d probably want one of the pre-aged models for a child, though. I can’t really see a kid breaking in a regular Brooks.

Thanks, Harald! I’m not sure that my oldest son would need a Brooks saddle, but he often complains that his is uncomfortable. It’s good to know about some of the options out there, anyhow.

Sweet, thanks for sharing! This would be a family heirloom for the kids and the grandkids. You have to think of these as investments for the next 50 years.

It would be nice to have an integrated lock on the back wheel. My daughter and I aren’t too careful with her lock particularly during the “we’re late and the tardy bell has rang!” parking routine at school, so this would be a practical problem, plus the extra security would be sort of nice addition.

Leave it to a messenger dad..
Sweet.

You go, Sacha!
I have seen the inspiration for this mixte ridden around our neighborhood school with immense pride. I think most kids would intuitively respond to the care and quality that went into it, and take the best care of it.

This bike has exceeded the cuteness quotient in the exhibit hall…

In reality, with the usual kid way-of-life, this bike would be stolen so fast it would leave vapor trails….

No way would my parents have let me have a bike that expensive, even if they could have afforded it.

Absolutely beautiful. But if a kid can’t try and jump his bike off a picnic table or ride it off a dock into a lake, what good is it?