The North American Handmade Bicycle Show (NAHBS) doesn’t officially open for another hour or so, but I walked around the show floor for a few minutes last night as exhibitors hurriedly put together their booths. One bike that caught my eye was a tall bike in the Calfee booth. A Calfee tall bike is reason enough to stop and stare, but this thing is made out carbon and has bamboo hemp-fiber lugs. Check it out… 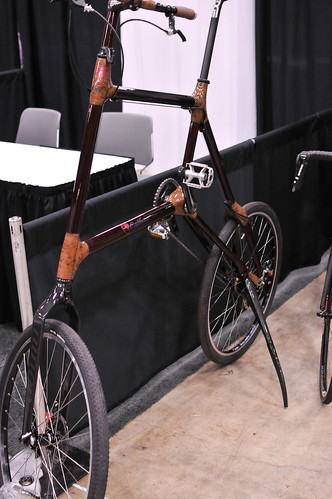 That has got to be the world’s most expensive kickstand! I’ll get some specs and more detailed shots today. Stay tuned for more NAHBS coverage through the weekend.

— Many thanks to United Bicycle Institute for their support of our NAHBS coverage.

How many sharks can that thing jump?

I was going to recomend a “carbon free” bike to help save us from global warming, then I looked out the window…

or you can go with metal lugs and a bamboo frame
http://www.instructables.com/id/How-I-built-a-carbon-bike-frame-at-home-and-a-bam/

Bamboo lugs? Probably backed up with carbon. That thing must come with a polo mallet….

Calfee loves to play with design ideas, I’m so glad he brings them out for all to see and enjoy.

Vulture Cycles made a much nicer one out of steel and displayed it at the Oregon Handmade Bike Show 2 years ago.

funny, that design is pretty much the same as my tallbike. only real difference is mine’s steel