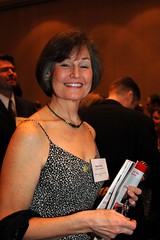 It is truly the end of an era: Local transportation activist and bicycling superhero Karen Frost, who has provided graceful leadership in the Portland/Metro area for over 20 years, has announced she will retire by the end of March.

“She was (and is) the perfect ambassador, humanizing the bike community for the outside world and smoothing ruffled feathers within it.”
— Matt Giraud

Frost first became interested in bicycling as transportation in the 1980s, when she worked as a graphic designer in Sandpoint, Idaho. She pedaled around town on her bicycle, towing a trailer. She used a bike trailer both for her work and for hauling her young son. Frost moved to Portland in 1986, continued to ride her bike, and soon got involved with Portland’s nascent bicycle-advocacy movement.

“Karen has made a real difference everywhere and with everyone,” says Rex Burkholder, a Metro Councilor. “We will miss her.”

Burkholder was one of the founders of the BTA back in 1990. “Karen was the heart and soul of the BTA,” Burkholder recalls.

“I remember when we had our first office, on the third floor of the old Portland Telegraph building. It was mostly abandoned, and Karen would cheerfully march in, and then get going on making our world safe for cycling. Karen supplied warm muffins, coffee, and amazing inspiration. She was someone has truly “walked her talk,” riding her bike to work every day.

Karen brought warmth and an aesthetic sensibility, making the BTA a place that swarmed with volunteers and good feelings… I think this made the difference: We weren’t ‘angry activists,’ we were spirited citizens helping make a better place.”

Frost joined the BTA in 1991, first as a volunteer and then as a board member, before being hired as the group’s first-ever executive director in 1995. “We always looked bigger than we really were,” Frost remembers. “We were a combination of rabble rousers and suits-and-ties… and skirts!” 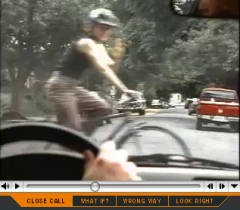 Frost worked on a series of PSA’s.
– Watch them here–

Matt Giraud was another BTA founder who worked closely with Frost in those early days. As a graphic designer, Giraud helped develop the BTA’s “look,” and he also renamed the organization (originally called the “Portland Area Bicycle Alliance”). Giraud remembers when he and Frost worked together to produce and direct the BTA’s series of television PSAs, called “Decide to Ride” (watch them here).

“Karen played such a key role in Portland’s bike revolution,” Giraud says. “She had no shortage of energy, passion, and ideas… Confrontational situations — no shortage of those in the early days when cars roamed the earth unchallenged — seemed to melt before her. She was (and is) the perfect ambassador, humanizing the bike community for the outside world and smoothing ruffled feathers within it.”

In all, Frost worked for the BTA for 12 years (1991-2003), starting as a volunteer, then a board member, then serving as executive director, and finally working as a program manager, “doing what I loved most, developing programs and working with volunteers,” she says.

During her time at the BTA, here’s what Karen recalls as her proudest accomplishments:

After leaving the BTA in 2003, Frost worked on her own as a consultant before eventually being hired as executive director of the Westside Transportation Alliance — a group that promotes biking, walking and transit to all of Washington County. 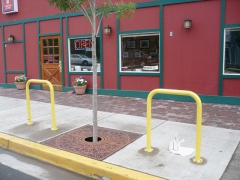 “I’m proud that me and my staff ‘walk the talk‘, showing up at meetings and employer sites by bike and transit,” Karen says. “We show it can be done.”

She’s also proud of the WTA’s Tigard Bike Rack project. She wants to take this service to other cities in Washington County to help manage the installation of bike racks serving retail stores and customers.

So what does Frost plan to do after she retires? “I’m looking forward to it [having more free time],“ Frost says. “I have no idea what I’m going to be doing. I’m going to take a break; I’m not going to join any committees! I want to read to children.”

— Publisher’s note: Much of the comfortable bicycling environment we enjoy today in the Portland region — both in terms of politics and infrastructure — we owe to people like Karen Frost. Thanks Karen! Also, thanks to guest contributor Curt Dewees for writing this article. — JM

She looks great! Guess that’s what a lifetime of biking does for ya!

Thanks for all your work, Karen, and congratulations on a well-deserved retirement!

One other memory I could add: When we were filming the PSA series “Decide to Ride,” one of the shots I wanted called for a Hawthorne Blvd deserted except for our lone car. It had looked doable in the scout, but when we actually began shooting, cars kept coming out of nowhere to ruin take after take. Rush hour was revving up, and our window to nail this key shot was closing fast. But Karen said, “don’t worry, the bicycle gods will smile on us,” and sure enough, we nailed it the next shot.

Thanks to Karen, the bike gods have indeed smiled on Portland — and that’s because, well, she’s one of them.

fyi, here’s a higher res archive of the PSA series Karen and I worked on, if anyone’s curious: http://vimeo.com/album/174284

I loved working with Karen at the BTA. She’s such a diplomatic advocate and warm, personable colleague.

Yay Karen! I remember volunteering for the BTA when Karen was at the helm. Every time a new volunteer walked in, she welcomed them with a great smile and introduced them to everyone in the room (what a memory for names!). We all knew we were appreciated and had fun doing even the most mundane tasks because of Karen. She has such a great, warm, welcoming personality. She is non-confrontational yet completely unwavering in her mission to open the world to bicycling…exactly the kind of ambassador that any “movement” would want to have.

Congratulations Karen on your much deserved break. I have wonderful memories of riding to Salem with Karen and Brita Johnson. We and many others went to Salem to lobby on behalf of bicycling infrastructure and to celebrate the anniversary of the Bicycle Bill.

Karen, you are a superlative advocate and cohort. Looking forward to your exciting and adventurous new beginning, whatever it may be.

Thanks also to Curt and Jonathan, for a post worthy of the the Great Karen.

Karen is a super-mensch, and a super-hreo of sensible transportation. Thanks for all you’ve done for everyone who walks or rides a bike!
Thanks for the tribute — well-timed and well-done.

I’ve only had the pleasure to work with Karen during her WTA stint and It’s great to see her full legacy celebrated here. I’m astounded by what she and other pioneering activists accomplished. Bravo Karen!

Karen, you are such an angel – what amazing integrity and charm you have. Congratulations on your retirement!

What a boost to my morning and my life! Thank you for all your kind words and reminders of fun times. Especially thanks to Curt and Jonathan.

We had the distinct pleasure of spending the night together in the snow-bound Denver airport, sleeping on little, airport-supplied rubber pads!! She was always upbeat and funny, even then. Karen Frost is one of a kind. We will miss your personality and leadership. Best of everything to you in the future, Karen. Your travel partners, Bill and Norma

Like the fountain says “people are the wealth of the city” or something like that, Karen has been, and will continue to be for many years, a gold mine of ideas, inspiration, friendship, and commitment for all of us who seek a liberated city where the streets belong to all the people.