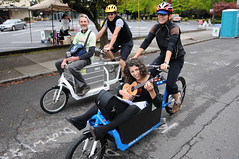 Cargo bikes are taking off in the
UK too.
(Photo © J. Maus)

– The snow continues! And in Minneapolis, people on bikes “seem to be the only ones prepared for the weather.” Meanwhile, the world’s bicycle snowplow fleet is being deployed.

– An Australian has won her years-long legal battle to be allowed to bicycle without a helmet.

– An academic debate rages in the theoretical underbelly of urban planning—should we build dense and high, or in a sort of “flow” with the natural landscape?

– Rahm Emanuel has officially entered the race for Mayor of Chicago, and he has already laid out a plan for bicycling and transit.

– In NYC, amid an atmosphere of increasing political posturing about transportation, a group of well-connected citizens have teamed up to sue for the removal of a separated bike lane along a major Brooklyn arterial.

– Cargo bike sales are up worldwide.

– A town in the Netherlands is installing solar panels on a stretch of bike lanes to power local traffic lights and more.

– UK cyclists are having some luck using helmet cameras to get traffic convictions for dangerous driving.

– The unique device created by a tallbike rider in San Francisco in order to be able to come to a full stop while aloft his steed has been declared legal by a judge.

– A new bike lane in Capetown, South Africa, is the occasion for racially charged political wrangling over the future of the country’s transportation system.

– Mobile, Alabama currently has under three miles of bike lanes and is looking into adding more.

– A small college in North Carolina is offering a minor in the field of Bicycling Studies.

– From Cambridge, Massachusetts, an inside look at what it’s like to be a carfree family.

– Organizers of a bike repair workshop for women in Rwanda were astounded by the turnout in the hundreds.

– I try not to beat Portland’s drum too loudly in this space, but check it out, the city government switched to cargo trike delivery for its substantial office supply needs.

– Don’t worry, the fixie craze is going stronger than ever in Jakarta, Indonesia.

– If you’re in the mood for a rant, this one points out that people on bikes aren’t slowing you down in your car—cars are.

If anyone want’s their daily dose of disappointment in the humanity of readers/commenters on OregonLive, check out the cargo trike delivery article.

To that story, there’s already some intelligent, well thought out encouraging comments despite those of the usual Oregonlive.com groaners. Check out the comments of ‘Pragmatic’ and ‘Traveler TC’.

For some good news, I offer this up…

The fence posts that appeared where the Fanno Creek Trail crosses SW Hall last summer have been removed.

Boston.com story is a bit hard to follow, but good. In the field of urban design, the school of thinking referred to as New Urbanists have directed urban planning for decades. More recently, along comes a new group being referred to as Landscape Urbanists.

What I seem to gather from this story about the latter group, is that they’re into refraining from paving over every square foot of the natural landscape to build suburbs, but aren’t so keen about zoning and land use laws and regulations seeking to contain sprawl. I wonder how that’s supposed to work.

The bike workshop for women story looks like it took place in Uganda, not Rwanda. Regardless, it’s a great story!

From the story about the Australian, I love the thought picture this section creates:

“Why force cyclists to wear helmets when politicians ignored a 1998 report from the Federal Office of Road Safety that showed brain injury rates among motorists would be cut by up to 25 per cent, even where airbags were fitted, if drivers wore bicycle helmets, he said.”

I spent some time in Mobile last year for work and I’m not sure if they have more than 3 miles of sidewalks. 😉

you’ll have to ask the origional articles authour for that.

odd, that was supposed to be in response to q`Tzal’s post.