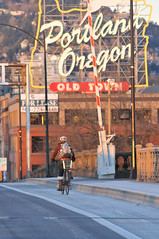 Happy new year! It’s now been over two years that we’ve brought you a weekly bicycle news roundup—only missing two weeks, ever. If you value this feature, please consider dropping a few dollars in the BikePortland tip jar to help keep it going for another year. Thank you all for coming back week after week to read and discuss the news.

And now, here’s the news that caught our eye this week:

– There’s been a lot of talk in recent years about Peak Oil. But have we reached Peak Driving, with a demand for cars and road miles reaching saturation point? The numbers suggest this moment may have already come and gone.

– The great New York blizzard was big news last week and transportation was the real story. Cars, trains, and planes were not the best way to get around. While streets remained blocked for hours by the cars, tow trucks, and emergency vehicles that became stuck in the snow, often in chain reactions, snowplows were able to access bike lanes early on, resulting in grumbling ranging from the livid to the hilarious.

– In Uganda, a political candidate is campaigning by bicycle, saying “I want to feel the potholes in areas I will represent in Parliament once elected.”

– Now here’s an interesting concept — make people who cause car crashes pay for the response from police and fire crews themselves. This story in the LA Times says 50 cities have already adopted “crash taxes.”

– The president of the Philippines plans to take up bicycling in the New Year as part of a resolution to get more exercise. His former sport of choice is shooting.

– A story provides only a few tantalizing details about a village in India where bicycle riding has been banned since the 1970s.

– A new hybrid bicycle and coffee shop in Lexington, Massachusetts is building community and motivating people to ride through the snowy New England winter.

– An in-depth article about bicycle fatalities in Spokane in 2010 focuses heavily on what people riding bikes can do to stay safe, even though four out of five of the victims weren’t deemed to be remotely at fault.

– An irreverent parsing of the variety of roadway classifications in the UK, and what their historical and current incarnations mean for a variety of users, from bikes to geese.

Feel free to email potential news items to elly at bikeportland dot org, or to tag them in del.icio.us as “mondayroundup.” On Mondays you can usually catch a few news items that didn’t make the cut by checking Elly’s twitter.

I love the bike/coffee shop!

nice choice of pic for the Monday roundup – the billboard has been updated.

crash taxes! yes! it’s about time! general taxes pay them to be ready, the crash tax is for your specific crash that you caused… to be against this is to admit you’re a bad driver that doesn’t want to pay for their mistakes… need to write to lawmakers here to have them introduce this…

Does our collective indignant believe in crash taxes change if they’re covered by insurance?

Crash taxes needs to be respun

re; NYPost reporter Steve Cuozzco’s article about bike lanes being cleared in the city’s recent big snow storm, he writes the following:

“… But Broadway below Columbus Circle remained slow for motorists even after finally being cleared. Vehicles squeezed into a single lane at many points, thanks to wayward drifts, cars parked at the sidewalk and others parked in the mid-avenue buffer lane designed to shield the bike lane from moving traffic. …” NYPost/Cuozzco

Notice that he’s attributing the above slow down not to the bike lane itself, but (in addition to the wayward drifts), to cars parked on the sidewalk and in the mid-avenue buffer lane designed to shield the bike lane from moving traffic. According to Mr. Cuozzco’s description, it sounds like the real problem there on Broadway was due to cars parking where they shouldn’t be parking.

In 2003 my car was t-boned by a driver who ran a red light. The county sheriff’s office contracts with a tow-truck company for crash cleanup and vehicle removal. When I went over all the paperwork for my claim, I noticed that there was a $75 hazardous materials cleanup and disposal fee from the towing company. I later asked about it and was told it was for cleaning up the glass and various fluids that either my vehicle left or what the fire department left as a result of my vehicle. The other driver received the same $75 fee.

I wasn’t concerned since his insurance had to pay for it all, but thinking back on it, if the sheriff or fire department sent bills in as well I would have to ask what my taxes were paying for.

If they want to levy fees for the services they provide, they become no different than any other private business in America and my tax dollars should no longer go to supporting them.

Spiffy
general taxes pay them to be ready, the crash tax is for your specific crash that you caused…

My job doesn’t pay me to be “ready” then pays me more when a piece of paper comes across my desk. I don’t pay my plumber or electrician to be “ready” either in case I need to call them.

Did I miss it? Again?
Reply to  Chris

Perhaps your job doesn’t, but the military does. There are some jobs that don’t pay until you are actually doing something, and others (like mine) that pay you regardless. Not every job will have a pay structure identical to yours.

Opus the Poet
Reply to  Chris

1st) These fees are aimed at the party found responsible for causing the crash. from the LA Times article: “We’d like to be able to recover some costs … from the at-fault party,” city spokeswoman Linda Tucker said.

2nd) These “crash taxes” are not imposed until someone does something that endangers the public. Certainly emergency medical, fire and police response are beneficial to the public good and the efficient flow of society and commerce. This does not negate the fact that a private citizen is, through their own easily preventable actions, incurring costs that all must pay. Hazardous crash debris, toxic chemicals and fires must be dealt with quickly but could have been avoided had the at fault driver been more careful. Must we continue to subsidize careless and reckless driving?

In cases where investigations can conclusively show that a crash was preventable the government should be able to recoup cost incurred by others carelessness.

Because: it’s a government for the people by the people; we are all paying for it and we all should be concerned how we are wasting our own money.

I grew up in eastern Washington, and so am not surprised by the attitudes in the Spokesman Review article you cite. Spokane is, of course, quite a different city from Portland: hotter in summer, colder & darker & snowier (in winter), more auto-oriented, and substantially more conservative. (Not to mention much smaller.) So I’m glad they’ve been making inroads toward a bicycle network, but education of drivers and cyclists and development of bicycle infrastructure have a very long way to go.

The comments below the article are interesting for their ignorance, though actually not substantially different in tone or substance from comments on pretty much any Oregon Live article related to bicycles, though they seem a little more superficial. It’s frustrating that communications between the cycling and non-cycling communities (and of course many of us are in both) so quickly becomes toxic, especially when the latter group frequently takes the former’s lives into its hands.

“An in-depth article about bicycle fatalities in Spokane in 2010 focuses heavily on what people riding bikes can do to stay safe, even though four out of five of the victims weren’t deemed to be remotely at fault. ”

But of course they were at fault. What were they doing riding on our roads?!

Thanks, Elly, for digging this up. A good example of the importance of perception. I think of bicycle helmets as in a similar league. Though having something on my noggin seems like a really good idea, my understanding is that the helmets are in fact engineered for speeds/impacts beyond what most people ride or are likely to generate on their own.
Doesn’t mean we shouldn’t wear helmets, just good to keep in mind some statistics about causality, about what/whom we are protecting ourselves from.

delicious is going away, you know.

About the Spokane article…in my original draft I had a far more editorial comment. We were in Spokane recently and met many of the amazing folks in their thriving bike scene there. I hope they are in the process of gaining the confidence to not temper every public statement about dangers to people on bikes with blame for those same people. The advocacy quotes in that story may have been out of context, but they do smack a bit of consciously losing the PR war.

that spokane article is the problem. or, should I say, as an expert in poor tone, that article is claptrap. as long as the cyclists is implied to have been wrong even though they were just biking somewhere – then I am not interested.

anyone who values their personal safety like I do and does not find disgust in that article, I mean, who knows?

you can shoot from your bike if you have the right training and permits, like I do.

don’t be afraid, prepare yourself.

No worries, I prefer to train for close-range fighting.

As always, thanks for the Monday Roundup. Much appreciated.