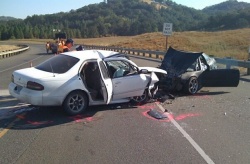 A landmark, 186-page special report by the Transportation Research Board (TRB) published this week delivers a critique of U.S. traffic safety efforts and says that we have fallen way behind in saving lives relative to other nations. The report, Achieving Traffic Safety Goals in the United States: Lessons from Other Nations, was published by the National Academies Press and is available as a free PDF download.


“The gap between traffic safety progress in the United States and the other high-income countries… indicates that the United States may be missing important opportunities to reduce traffic deaths and injuries.”

To find strategies the U.S. might use to catch up, the TRB put together a committee to research and document the experience of other high-income nations and learn more about the programs they’ve used to improve traffic safety.

What they found is that in recent decades, nearly every other high-income country has made more rapid progress that the U.S. in reducing road traffic deaths and the rate of deaths per mile traveled. As a result, says the study’s preface,

“The United States can no longer claim to rank highly in road safety by world standards. The gap between traffic safety progress in the United States and the other high-income countries… indicates that the United States may be missing important opportunities to reduce traffic deaths and injuries.”

To put it into numbers, the study found that from 1995-2009, traffic fatalities dropped an average of 50 percent in 15 high-income countries (excluding the U.S.) where such statistics are kept; but in the U.S., fatalities have dropped by just 19 percent. Here’s a table taken from the study:

The report takes a comprehensive look at Australia, France, Sweden, and the United Kingdom and attempts to understand the how and why behind their successes. The TRB committee left no stone unturned, examining every possible component that could impact traffic safety, from cultural demographics and attitudes to enforcement strategies (or lack thereof), political and public support and economic cycles.

As you might expect, no silver bullet solution was found, but a general tone does seem to emerge. Check out this excerpt:

“The lack of progress in reducing the highway casualty toll might suggest that Americans have resigned themselves to this burden of deaths and injuries as the inevitable consequence of the mobility provided by the road system. In other countries, public officials responsible for the roads have declared that this human and economic cost is neither inevitable nor acceptable and have undertaken rigorous and innovative interventions to reduce crashes and casualties.”

This reminds us of the concept of “Vision Zero” that traffic safety consultant Peter Jacobsen spoke about in Portland recently (and which the TRB study also mentions at length).

The report is a fascinating read for transportation wonks and advocates. One section I found of particular interest was how the America socio-political environment is one big reason why we haven’t moved forward in making roads safer as quickly as other countries. Here’s an excerpt from a section titled, Lack of Political and Public Support:

The report didn’t just detail the problems, it outlines recommendations about how the U.S. can solve it. Improved road design practices (roundabouts were mentioned a lot, as was the need to do road safety audits) and stepped up enforcement programs to gain control of speed and drunk driving were two of the key recommendations.

The Oregon Department of Transportation had a representative on the committee behind this report; Troy Costales, Manager of their Transportation Safety Division. I’m hoping to have a Q & A with Costales later today about this report and traffic safety in Oregon in general. Stay tuned for that.

For more coverage on the TRB report, check out stories on NPR and the Wall Street Journal. You can also download the report for free here.

I haven’t read the full text yet, but did some searching in it for phrases related to the simple solution of getting Americans to drive less. Nothing turned up.

When will we see serious attention to this simple, serious solution? Even the math is simple: If we have a known deaths-per-mile-driven, and our goal is to reduce deaths…

It seems so simple to me. Driving fewer total miles is a solution to so many problems.

Chris,
You took the words right out of my mouth. I plan to ask a question similar to this when I talk with Troy Costales.

The reason you don’t see that mentioned, IMO, is that unfortunately, any official, state or national position that says people should drive less would likely spur controversy and anger. Typically researchers the size of TRB tend to avoid such controversy.

Remember when Ray LaHood DOT Sec. said this was “end of era favoring motorized transportation”? He raised quite a few eyebrows with that statement and their office heard some angry words from the freight community among others.

It really is appalling the level of danger we find acceptable when cars are involved. Can you imagine the outrage if some public transit system had injuries and property damage every day at rush hour. Yet, just listen to the radio and you’ll hear about it happening to cars prettty much every day.

I’d love to see more attention paid to the deaths by automobile air pollution too. The numbers are a bit more murky and hard to pin down, but it’s in the thousands, probably tens of thousands. (In the US)

I did a very rough calculation the other day and found that the typical US full-time car driver kills 2.5% of a person over their lifetime. It was very quick back-of-the-envelope math so it’s probably not quite accurate, but it should be within an order of magnitude. I’d love to see someone do an in-depth analysis.

What the study results do not show is that US traffic fatalities INCREASED or stayed the same year over year for EVERY year from 1998 to 2005. They’ve fallen since 2005, but that’s due mainly to reduced VMT (Vehicle Miles Traveled). Look at the FARS data:
http://www-fars.nhtsa.dot.gov/Main/index.aspx

Note: FARS differs from the study numbers due to a different counting methodology, but the overall trend in both data sources is the same – we’ve effectively done everything we can to make the actual cars safer – future improvements will come from reduced VMT; education, engineering and enforcement; and from cultural change and/or reduced highway speeds. (actual highway speeds – engineering dictates the number on the sign, culture dictates whether anyone obeys it)

We’re too afraid to change.

Briefly:
while modern roads were spearheaded by the Roman Empire for military purposes (much as the US Interstate System) road systems do wonders for commerce.
The increase in speed and reliability of goods over time has allowed for a dependable source of income for all but especially governments.
There might be common law and common sense reasons to believe that all roads should be accessible to all users but from the stand point of our patented “Good ol` US of A” brand of capitalism we must have efficiency at all costs.

At some point we as a nation will need to get the road planners together with the network backbone planners and have a discussion with a topic like:
“Maximum theoretical throughput is theoretical: how to calculate and manage traffic flow of a diverse user base with out packet loss/crashes.”

The situations are not perfectly analogous but this a problem that can be solved if we stop assuming that road kill is the price of progress.

Maybe the drop in road deaths recently was due to a decline in the number of people in each car. Here in DFW we are down to an average occupancy of 1.08. Our regional planning agency has half joked the only way it could get any lower would be for the cars to drive around by themselves, this before the recent advances in the DARPA and Google autonomous cars.

When I heard this reported on NPR a few days ago I contemplated the spin that it would produce from the Republican controlled house.

With a transportation bill likely to be heading to the floor in the next session I can hear the rhetoric already: “We have the most dangerous roads in the modern world and you want to fund bike paths.”

That’s a very easy argument to refute: cars are what make the roads dangerous. More people riding bikes (or walking, or transit) instead will make them safer.

To which the “common sense” (to them) reply is:
“WE CAN’T HAVE MORE BIKES ON THE ROAD!!! THEY’LL IMPEEDE TAX PAYIN` CITIZENS, COMMERCE AND THE AMERICAN WAY!!!”

The big 3 of transportation safety: engineering, enforcement, and education. In the US we have systematic challenges at every level.

Engineering for safety is counter-intuitive and often not a measurable project goal. Construction is focused on increasing capacity and reducing delay. Freeways look amazingly safe from a statistical perspective, very few crashes per VMT. We should build all of our roads 6 lanes wide with huge shoulders to improve safety! When in reality the narrow neighborhood street with trees in the clear zone might be safer.

Enforcement is almost entirely for DUI, stop sign/red light violations and speeding. Speed enforcement is often corrupted with revenue generation in mind rather than safety. Rarely do we see strict enforcement of our existing laws. Run over a pedestrian when you were driving too fast at night in the rain? It isn’t your fault.

Education is completely ridiculous. We give drivers a license at 16 after a very easy practical exam. Drivers are not reevaluated on a regular basis or given adequate continuing education as laws and driving changes. Think my grandmother knows how safely navigate a roundabout? She got her license in 1944. She can’t remember what she ate for breakfast today but she still has her license!

I don’t think it’s the “traffic officials” who are too willing to accept the carnage. It’s the public. The public refuses to accept random sobriety stops, real penalties for DUII, strict enforcement of existing traffic laws, etc. We’re all outraged when the police won’t cite, and prosecutors won’t prosecute motorists who run down cyclists, right? I think you’ll find “traffic officials” overwhelmingly share that outrage. I know I’ve found a receptive ear whenever I’ve raised safety issues with city and state traffic officials. Their usual response is “That’s a good idea, but we don’t have any money.” And we can also trace that back to the public and their unwillingness to accept a gas tax increase. Oregon’s hasn’t changed since 1993.

Sadly this is true…I think our small “d” democracy leaves too many traffic engineers (and mayors) too concerned about citizen complaints [and underfunded through initiatives]…all too often in my past work in the NW the concern for motor traffic capacity would trump changes that could improve vulnerable road user safety and mobility when one looks to the best practices to reach Sweden’s Vision Zero, etc.

In my more recent work in Abu Dhabi with the DOT the US’s crash rates (outcomes) are not held in high regard…they are looking to international best practices for pedestrian safety in other places.

We have a cultural allergy to controlling the behavior of drivers adequately. It’ll be worse with a Republican controlled congress, as that party is the more thoroughly whored out to the oil and auto industries.
Our highways will become safer when we finally lose one of our Mideastern oil wars and our gasoline prices to up to European levels.