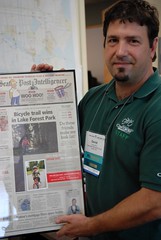 The twists and turns to the bike advocacy drama up in Seattle just keep on coming. After Cascade Bicycle Club — a non-profit bike event and advocacy group with 13,000 members — abruptly fired its longtime leader Chuck Ayers back in October, it set off of a messy feud between the Board of Directors and the group’s membership base.

The firing, said the Board, was a result of Cascade wanting to take a different, less aggressive and confrontational tone in its advocacy work. Much of that tone was set by Ayers’ right hand man, advocacy director David Hiller. Hiller is a confident advocate who understands the trench warfare it takes to make change against the status quo. His style is self-assured and sometimes rough around the edges; but it’s effective.

“The only way to rescue Cascade is to recall the entire board, rewrite the bylaws, and elect new board members who want Cascade to succeed.”
— Bike Club Rescue Squad founders in an article in Publicola

Members claim that the Board fired Ayers because he refused to fire Hiller. After the firing and a few tense days, Ayers got his job back on an interim basis. Ayers and Hiller are now back at work but there’s a new twist in the story.

A group of members have organized in the “Bike Club Rescue Squad.” Their goal is to collect the 690 signatures from Cascade members required to recall the entire board. An article published today on Publicola by one of the Rescue Squad’s leaders states lays out the reason for their concerns:

“If this board stays in power… Seattle cyclists will lose a strong and successful advocate at the time they need one most.

No lobbyist can function when his own organization is undermining him in the press and has little stomach for the rough and tumble world of politics. No organization should expect its lobbyist to serve the same functions as its public relations director.

The only way to rescue Cascade is to recall the entire board, rewrite the bylaws, and elect new board members who want Cascade to succeed.”

We had some rough patches and drama here in Portland with recent BTA Board decisions and leadership changes; but, with the calming effect of new leader Rob Sadowsky and several fresh faces on the Board, that ship has found its course and seems to be sailing smoothly now.

I hope things turn out well for Cascade. And soon. The Rescue Squad folks are right; there’s way too much bike advocacy work to do in Seattle right now to suffer a major, self-inflicted wound.

I know Dave personally and he’d be the first to claim to be rough around the edges at times. He’s also passionate about cycling and cycling advocacy beyond the vast majority of people I know. If the CBC were to let him go it would be a devistating blow to any momentum they have garnered in the time Dave has been there. That being said, please follow this situation BTA, if the CBC lets Dave go he’d be a great advocate here in the Rose City. I hope he stays though, no one has worked harder for cycling and been thanked less by cyclists for their work in Seattle.

1. If more people join would you need more signatures or is 690 the number regardless?

3. Is there a way to join and sign the petition at the same time?

perhaps a membership drive is in order if you start to get close and need a final push over the top.

NSFA: Not safe for serious politically correct advocates or those with jobs with strict content filters/policies.

Point83’ers come to Portland in Amtrak-loads for Filmed by Bike every year.

Bike clubs and advocacy people mix like oil and water. Advice: If you want to keep your bike club fun, friendly and focused on cycling, DON’T let advocacy nuts take over.

There are people who would like us to ride at only 10 MPH on expensive seperated infrastructure like the egalitarian European fantasy they have concocted in their mind.

The notion of fun and “Copenhagen-esque” are mutually exclusive. I often question whether most bike advocates really enjoy riding or is bicycling a convenient tool for pushing their environmental/socio-political/anti-car/ anti-oil agenda?

Jerry and Brad are soo correct. Really liked PUMP until they became NWTA and really cranked up the advocacy. Ended up alienating a bunch of long time PUMP members as well as potential new members

You can’t go on a NWTA ride without being guilted/preached into trail work or advocacy.

The club actually started w/ the bike “advocacy nuts” and then the “suits” took over when the corporate money started flowing in. Good article on the Cascade culture clash at Crosscut: http://crosscut.com/2010/11/05/transportation/20338/Culture-clash-divides-the-Cascade-Bicycle-Club/

And I don’t think you’ll find a single, wicker-basketed, “lovely” bike among any of the Rescue Squad/.83ers – unless of course said basket was ironically stuffed with ice and PBR.

I live 300k from Seattle, but am a Cascade member–and the advocacy of Ayers and Hillier is a large part of why!
I really hope the club isn’t throwing out the baby etc.

Sorry, you CAN ZooBomb and speak at City Council meetings if you want. I do. And so do a lot of others. Everyone has their agenda, and everyone wants to have a good time. What’s so hard about that? Though it does sound like Brad has a particular agenda that might be classified as “traditional vehicular cyclist”, one that’s had devastating consequences to bicycle modeshare in this country for years. Sorry your idea of fun is so exclusionary.

I think that Portland has a much better model than that of Cascade Bicycle Club. Portland has the BTA for the advocacy, and several bike clubs with focus on recreational riding, racing and touring. Most of the bike clubs in the Willamette Valley contribute to BTA to support statewide advocacy. This system seems to avoid the internal conflict that had erupted in the Cascade BC case.

@Jerry_W — thanks for that clarification. Agreed. Having boundaries on what a club or org tries to do can make things much easier on staff or members. Right now Cascade is trying to be too many things for too many people.

I also think that Jonathan’s characterization of Cascade Bicycle Club leaves out the founding purpose of the club, and probably the reason that they have so many members.

Cascade Bicycle Club — a non-profit bike event and advocacy group with 13,000 members. Please include the recreational rides that is the real core of the clubs existence, many, many group rides of various speeds, distance and location that so many members enjoy and participate in. That’s what the club was founded around and that’s what the event rides evolved from.

I’ve been a Cascade member for several years now, mainly for the events and early registration for STP. Advocacy and event promotion are 2 seperate categories in cycling and are often at odds with each other. Cycling advocacy often has its roots in social and environmental agendas more than in cycling as a sport. Green type cycling advocates are often opposed to large events like STP because of the huge number of auto trips they generate. Event participants who want to ride with other cyclists on supported routes don’t want to be made to feel guilty about their wasteful (in someones eyes) recreation practices. I don’t believe that mainstream cycling for fun and modern social cycling advocacy can functionally coexist in the same club. Their goals are very different.

sometimes the advocates forget to have fun: If everything you look at is broken when you go to advocate (which is technically useful when you’re trying to be a PITA) then you assume that everything is broken.
Sometimes the recreational cyclists forget that they ride on the roads too: When you drive to the start of every ride and only ride in a group, it’s easy to forget that every day there are people LIKE YOU who use the roads for business on their bicycles.

Cascade can make improvements to the lot of both the recreational cyclist and the serious cyclist, and it’s precisely the combination which can make them powerful. basically: a combination pizza hut and taco bell.

That said, “Cascade bikes on top of cars club” is not a complementary nickname.

NWTA member ship is WAY up since the changes. More importantly, nobody is stopping you from doing what you always did. Hold “no advocacy talk” rides if you like.

KTW, look at your meeting agenda. It’s always about advocacy instead of how to make rides more enjoyable for members. Even your epic mt hood ride in August in the end was a hard sell for NWTA in the form of raffles. Thanks but no thanks. No hard feelings and will always encourage NWTA participation, but my financial membership dues will go to other organizations who support their riders.

I’ll take quality over quantity any time. Usually the increased numbers translates into more people who could care less about the established culture of the group. Beginning of the end for many clubs (like Cascade)

I should clarify, I am just a member and don’t have any kind of leadership role. I’ve only been a member for a couple of years even though I have lived here for 15. PUMPs membership was pretty paltry compared to the number of riders in the area. I am glad to see it become more inclusive. And yes, to me that means the old guard as well. Clubs are what the members make them.

Potential Rider: “Should I bike to work instead of driving?”

Potential Rider: “Because of the cars and potholes?”

Co-Worker: “Heavens no! Some fast skinny guy in lycra might pass you and destroy your self-esteem forever!”

Label me as you wish, peejay. I’d love to see a plan that satisfies all manner of riders in Portland but it seems our community of advocates only wants automated bike counters, cycletracks, and bike boulevards on already slow traffic streets. I’ve yet to see a serious effort to make bike travel faster and more convenient than driving.

Those same advocates have also failed miserably at changing perceptions and laws to better protect cyclists. But get six blocks of “experimental” buffered bike lane built (painted!) near PSU and let the self-satisfied schmoozing and back slapping begin! “Mission Accomplished!!!”, eh?I’m done with their hype and symbolic victories.

Tomorrow, the sun will rise and the roads will be paved. Whether or not they have a painted line or a green box, I shall ride them and love every moment.

Jbiker is right. NWTA went downhill when they started advocacy as its main priority. I’ve also experienced NWTAs tacky hard-sales tactics and it really turned me off. Glad to be an ex-member.

NWTA has a bit of an identity crisis as I am still amazed they think they are a ride club, yet there is very little internal support for it anymore.

I also agree with Jerry, BTA is a great org that doesn’t mix rides with advocacy and they are crazy successful. Advocacy = politics, and politics = rubs some people the wrong way, or some people are turned off by politics.

Cascade seemed to have separated advocacy and events perfectly. You can participate in their events and never know cascade also advocate. I hope Cascade finds its way through this rough period.