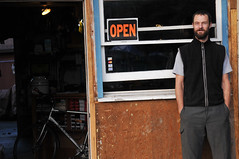 On Sunday, May 16th, a long-unused garage door creaked open at 911 NE Dekum Street, revealing the newest business in the Woodlawn neighborhood, Upcycles. Based in a single car garage space that’s been lightly remodeled, Upcycles is co-owner Kai Druzdezel and Mark Hoskins’ entry into the growing number of bicycle shops in Portland. Their opening coincided with the NE Portland Sunday Parkways, which passed through the sprawling Woodlawn Park, which is just next door to the shop.

Kai, formerly a cook at Breitenbush Hot Springs, fell in love with bicycling on long rides from the resort to the Oregon coast. While at Breitenbush, he and Mark opened a small bike repair service for employees’ bikes in a corner of the resort’s woodworking shop. A subsequent move to Woodlawn, and an appreciation for the neighborhood’s atmosphere, led Kai and Mark to the decision to start their business here. Once the space was identified, start up time and expense was fairly low, given they had a complete set of tools from their Breitenbush gig, and didn’t open with a large amount of inventory. “I still can’t believe it happened,” Kai recently said.

“It’s an honor that people trust us to repair their bikes, and especially when they come back.”
— Kai Druzdezel, co-owner

Key to their business are three things — friendliness, approachability, and excellent service. Indeed, in a garage-sized space, it’s easy to talk to the mechanic that is actually working on your bike. Kai says, “It’s an honor that people trust us to repair their bikes, and especially when they come back.” Inventory limitations due to the size of the space aren’t an issue, as they purchase from local wholesaler Cyclone Bicycle Supply, which they report is very convenient and offers them a quick turnaround time. 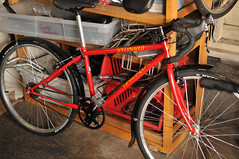 This nifty reincarnation of a
Specialized Rockhopper awaits a
lucky customer.

In the future, the guys at Upcycles intend to start refurbishing and reselling used bikes. They’re also interested in stocking a selection of touring and commuter bike frames and sizes, and then working with customers to customize their component specs based on cost, preference, and other factors.

Sarah Bott, a local Woodlawn neighbor, appreciates the new business. “It’s great to have a new local bike shop. I always make a point of saying hello when I walk by, and though they are always busy, they take time to talk to each of their customers.”

Upcycles’ reputation for service is extending beyond the Woodlawn neighborhood as well. SE Portland resident Paul Smith, who recently had his shaft-drive bicycle repaired there, said “Upcycles is a great neighborhood treasure, tiny but mighty, and mighty helpful at that. I sat in their space while they finished up working on my bike, and saw Mark interacting with other customers. Knowledgeable, thorough, and honest. And their gear is very competitively priced.”

Welcome to the neighborhood, Kai, Mark, and Upcycles!

Check out the Upcycles service menu, hours of operation, and more on their blog.

They are beloved, and deservedly so.

These guys are LOVED in Woodlawn.
There are lots and lots of shops in town, and we’re lucky to have this particular one here.

…by the way…a micro bike repair shop is opening up in downtown Vancouver soonish. I just saw a wrench installing slatboard inside a rented shipping container parked in a parking lot on Main and 16th Street (across from the museum). Its a tight workable space, that I could see popping up on every Portland bike commute corridor where food carts cluster. Though its got to be cold to start a business in a steel box in the winter.

I spoke to the mechanic…never seen him before.

So would the Woodlawn shop be the 50th? bike shop in Portland? What is the count? I counted 42, 3 years ago.

specialized hardrock, i think, judging from the drop bar.

This may be one of many bike stores in the area but they are heads and shoulders above most others in their customer service and down to earth attitude. I highly recommend these guys to any commuter whose had snooty service at other bike shops, you’ll be pleasantly surprised.

Nice shop. When I visited last month, they pumped my tires for me and gave me some free little adjustments and advice too.

I brought in my bike with a minor problem in the headset that several other bike shops hadn’t been able to figure out. Mark fixed it in less than 5 minutes and didn’t charge me a dime. Great shop!

hey, big thanks to Sam and Jonathan for the great write-up, and thanks to all our loyal customers for all your support!

I’ve found that shops that don’t have a clear difference between “Mechanic” and “Sales dude” tend to be the best shops.

They are so sweet and do great work! Even though Kai was busy, he got my bike assembled in a flash!!
They definitely made a lifelong customer in me!
<3<3<3
-Shell