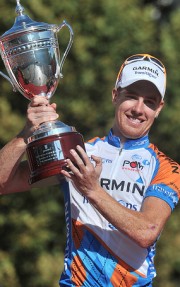 Tyler Farrar, one of the fastest professional road racers in the world, will sit down with local journalist Heidi Swift for an interview event in Portland this Sunday.

Farrar, a 26 year old native of Wenatchee, Washington, ascended to superstardom with a stellar 2010 campaign that saw him garner multiple stage wins in two of bike racing’s most prestigious events, the Tour of Spain and the Tour of Italy. Farrar has confidently staked his claim as one of the fastest sprinters in the world with wins over the likes of Mark Cavendish and other big names.

But unlike some elite athletes, the word on Farrar is that, despite his palmarès, he’s still a very down to earth and a “phenomenally wonderful human being” (according to Swift).

Sunday’s event has been made possible by the new Upper Echelon Fitness in Northwest Portland. Tyler currently races on the Garmin-Transitions cycling team and the local Garmin rep has graciously offered a Garmin Edge 500 as a door prize.

Submit questions for Tyler and get full details on the event over at Heidi Swift’s Grit and Glimmer blog.

What a great opportunity to pick this great sprinter’s brain about cycling and racing.

Thanks for posting this Jonathan! I’m going to go, should be interesting.

The ginger snaps were to die for.