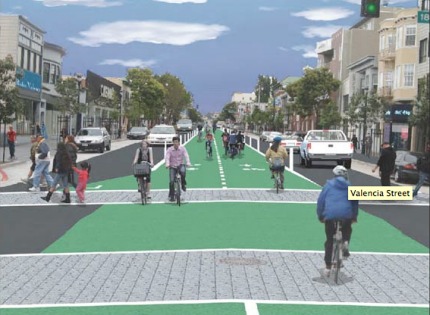 With the shackles of a court injuction against new bikeways finally lifted a few months ago, San Francisco is looking to move boldly ahead. Streetsblog San Francisco has a detailed report on “Connecting the City,” a new campaign by the non-profit San Francisco Bike Coalition to dramatically enhance that city’s bike network.

Streetsblog SF reporter Bryan Goebel sets the stage for how the new campaign would serve the needs of people who ride:

“Those of us on the streets every day know the city can’t settle for six-foot lanes that leave cyclists straddling the perils of speeding traffic on one side and car doors swinging open on the other… the city must embrace the infrastructure that makes those cities safe and inviting to people who ride bikes.”

And the plan has major support in City Hall, with SF Gate reporting that San Francisco Board of Supervisors President David Chiu (fresh off a trip Amsterdam last month) will introduce a resolution to have 20% bike mode share in the city by 2020.

“Each route must produce the “aaah” effect, the sensation you get when you’re liberated from the anxiety of threatening auto traffic.”

Goebel refers to the SFBC’s campaign as their “most ambitious undertaking to date”. Their acting executive director says part of the plan is to take the city’s existing crosstown routes and “elevate” them to the “8 to 80” standard pushed by noted activist and consultant Gil Peñalosa. That standard seeks to make roads accessible and inviting for people from eight to eighty years of age.

Put a different way, SFBC’s Andy Thornley tells Streetsblog that the theme of the new routes — 27 miles of them within five years — is “comfortable and continuous.” “Each route must produce the “aaah” effect, the sensation you get when you’re liberated from the anxiety of threatening auto traffic.” There’s a big emphasis on separation and they’re even looking at some Trondheim-style bike lifts to get folks up the notorious hills.

Check out the full article on Streetsblog SF to learn more about what bike advocates and planners are working on in San Francisco.

So, exactly five years later, how’s the Blueprint for Better Bicycling doing these days? Remember that SFBC is an advocacy group, and take their ’27 miles in five years’ goal with a full shaker of salt.

Sam Adams is looking less and less visionary with each passing day.

This is life as I know it.. SF has come along way from years past, I was on the early CM rides. change is good.. but time is on our side.. 🙂

@Elliott: An injunction had blocked infrstructure progress for many of those 5 years; now it’s lifted and progress is made on a daily basis.

yeah, they were pretty crippled by a misguided citizen activist who thought bike lanes had a negative environmental impact by slowing auto traffic down.

Ethan: When was Sam Adams *ever* a visionary?

That’s a laugh. Just look at that guy, you can tell he doesn’t spend much time with bikes.

It would be great to take Valencia to the next level.

The SFBC is a PAC. They have like 10,000 members who get a list of whom to vote for. Vision would be if the BTA found some courage and became a PAC.

Jim (#4) – I think you missed Elliott’s point. BBB is a BTA program here in Portland, and wasn’t blocked by anything other than bureaucratic inertia. (granted, that can be as troublesome as a court injunction, and sometimes harder to fight) I’m curious to know, how the BTA stand re: BBB? Obviously they have limited control over the process, and the most important projects identified in that document are long-term projects, but after 5 years, it’d be great if the BTA gave us (the public, and also us who are members) a progress report on where they feel they are in relation to their stated goals, as well as when or whether they expect to meet those goals.

Presumably the BBB will be supplanted with whatever direction Rob Sadowsky intends to take the organization – when it was written, Evan Manvel was Executive Director, and Scott Bricker was the Project Manager. None of the project team that wrote it are currently BTA staff.

I think it’s safe to say that since BBB was intended to be the guiding document for focusing the BTA’s efforts (as stated on page 2 of the BBB – “defines the future direction of the BTA’s bicycling advocacy”) that it will be superceded by whatever the current staff comes up with now that Rob Sadowsky has taken the helm.

I’ve never seen the bike lanes in the middle before.

How do you all think that would work out?

It reminded me more of the Pennsylvania Avenue lanes in DC