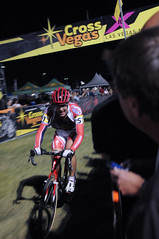 Last night, after a full day roaming the aisles of the Interbike trade show, I hopped on a shuttle bus and headed a few miles off the strip for Cross Vegas. Cross Vegas is a major cyclocross race that draws international pros and America’s top talent. But, since it’s in Vegas and since it happens when (nearly) the entire U.S. bike industry is in town, it’s just as much a spectacle and a party as it is a bike race.

From the Elvis impersonator who posed for photos, sang the national anthem, and then did a bike-inspired rendition of “Leaving Cross Vegas,” to the VIP Players Club area with a metal praying mantis dance club that spit fire, it was an amazing night. And, did I mention there was a full moon?

A few other things I noticed at this race that had me mumbling to myself, “This is sooo Vegas”: 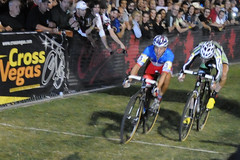 Mourey nips Driscoll by just
inches at the line.

Oh, and there was also a bike race. And it was a darn good one too. After the industry-folk laden “Wheelers and Dealers” race, the elite women tore up the fast, mostly grass course. Besides the skills and speed displayed by the racers, of particular note in the women’s race was that they actually had a larger cash prize purse than the men! (The organizers got into hot water last year when they only gave a paltry sum to the women winners compared to the men).

The elite mens race didn’t end until around 11:00 p.m. or so, but it was well worth staying up for. Oregon’s Ryan Trebon led for much of the early stages and was never out of the top three. After he relinquished, Jamey Driscoll attacked and got a pretty solid gap that he held almost till the end. In an absolutely thrilling final sprint, French Champion Francis Mourey overtook Driscoll by just inches at the line.

The crowds pulsed with cowbells, horns, and cheers. The Vegas strip twinkled in the background. It was a great night of racing by any measure. Read more about the how the races ended up at CrossVegas.com and watch my slideshow below for a taste of the festivities…

You forgot to mention that Portland’s own Sue Butler was 5th in a stacked elite women’s field. Go Sue! Amazing!

Nice work! Thanks for the coverage.