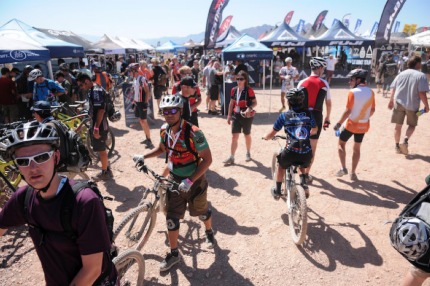 After lines at airports, taxi stands, hotels, and shuttles, J.R. and I finally made it out to the Outdoor Demo at Interbike. While the formal part of the show (which starts Wednesday morning) feels more like a business transaction in the carpeted halls of the Sands Expo and Convention Center, the Outdoor Demo feels like you’re at a trailhead with your ride buddies, complete with coolers full of beer and trucks full of bikes. 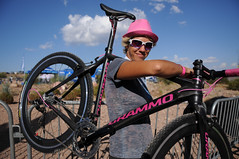 The Demo is the place where bike shop employees and other industry types can take bikes for a test ride on everything from paved paths to open roads, singletrack trails, and rock-strewn downhill runs.

Between wind gusts that nearly blew entire exhibitor tents away and blew dust everywhere, here’s what I saw…

With just one day down and three to go here in Vegas, my hunch is already forming that e-bikes will be the big story of this year’s show. The first guy I talked to today was a bike shop owner from rural Colorado who was trying out a new electric-assist city bike from Torker. “I might be interested in e-bikes,” he said, “so I thought I’d try one out.” I think that captures the mood of a lot of dealers here in Vegas. (Stay tuned for more e-bike reporting).

Here’s what else that caught my eye while walking through the Outdoor Demo. 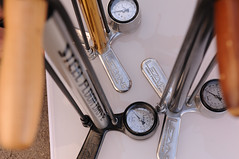 Lezyne (like “design” with an l) makes very well-designed and well-made pumps. The company is based in San Luis Obispo, California and has been around for four years. Michael “Mickey” Kozuschek started Lezyne after building Truvativ into a successful brand and then selling it to SRAM. Their floor pumps are gorgeous with models that include wood-grain handles and CNC’d parts, all of which are made to be fully serviceable and replaceable so you can own them for years and years. Retail prices range from $70-$100. 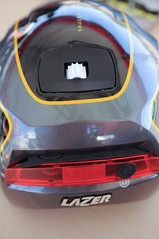 The white knob is to tighten/loosen
and yes, that’s a real light
(not just a reflector!).

A few tents down from Lezyne were a selection of urban-minded helmets from Lazer, the oldest helmet brand in the world. Lazer is a Belgian brand that is distributed in the U.S. through Minnesota-based Quality Bicycle Products. Their urban helmets are stylish (in a euro way) and super-functional. I tried on their $70 “Krux” model with the “Rollsys” fit system. The Rollsys is a little wheel on top of the helmet that you can tighten or loosen for exact fit. My favorite is their “Urbanize N’Light” model ($100) that comes with a front and rear light embedded into the helmet! 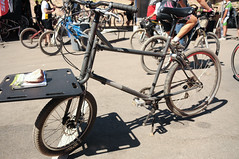 Also distributed by QBP is an urban bike brand they created called Civia. They had their Halsted cargo bike on display. The Halsted is a cycle truck similar in spirit to the one launched by Portland builder Joseph Ahearne back in April. Civia product guy Scott Thayer said the Halsted will be available in February and will retail at about $1,000 for the complete bike — making it a very affordable option. 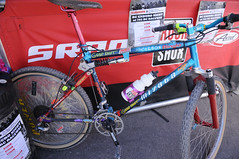 The next bike I stumbled upon was one I’ll never forget: the 1993 NORBA (National Off-Road Bicycling Association) National Downhill Point Series Championship bike owned by none other than living mountain bike legend Greg Herbold. This Miyata stirred up many memories for me. I started racing mountain bikes in 1994 and owned many of the same aluminum, anodized parts that were on this rig. The Ringle stem, the Onza bar-ends and HO canti-brakes, the Grip Shifters. As an added thrill, I also got meet and chat with Mr. Herbold, who’s still working in the industry over 20 years after he won the first NORBA downhill championship in 1990. 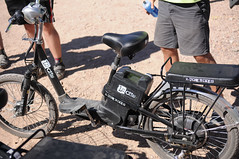 Luche Bikes, straight from the
streets of China.

On the other end of the spectrum where these e-bikes from a new company out of Colorado Springs named “Luche Bikes.” The bikes are imported directly from China with just a few modifications for the U.S. market. The lead-acid battery gives it more torque than more popular lithium ion batteries and they’re also less expensive, making the Luche retail at less than $1,000. 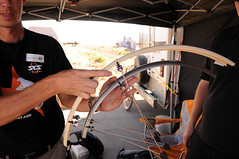 SKS is a German brand well-known to everyone in the Pacific Northwest for their fenders and other accessories. New this year says North American GM Mark Burgener is the full-coverage “Longboard” fender. Mark also shared their prototype “Stowaway” frame pump that’s designed to be stored in your handlebars… 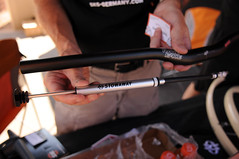 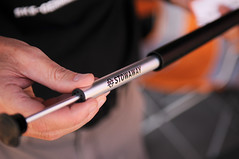 The pump stows inside your handlebars.

The SKS Stowaway will retail for about $25 and is expected to be available in January 2011. Pretty nifty idea, as long as you don’t forget it’s in there… 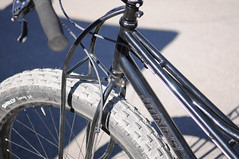 Speaking of nifty ideas, it was a pleasure to bump into southern Oregon bike builder Jeff Jones. He debuted a new steel version of his “SpaceFrame,” a 29er with huge rims and tires that make for a grin-inducing ride. Jeff runs about 10 psi in the front and 15 in the rear, which gives the bike traction in corners like you wouldn’t believe. I rode the tightest circles I could manage over loose gravel, rocks and dirt and I could not get the wheels to slip at all. 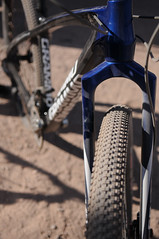 Some other bikes that caught my eye were from the New Zealand brand, “Grammo” (distributed by Ashland, Oregon-based Unique Sports Company). Their new carbon 29er is quite a machine. It’s got mustache bars with a sloping top-tube, disc brakes, a BB30 bottom bracket, and the beefiest carbon fork I’ve ever seen. Also from Grammo is the carbon 2011 “Cleo” cross bike, which was black and pink so I had to shoot some photos of it.

O.K., that’s enough for now. For more photos from Outdoor Demo — including shots of Surly’s new Pugsley, the KidzTandem, and more — check out the gallery or sit back and watch the slideshow below.

Stay tuned for lots more coverage. The show formally begins Wednesday morning and there’s lots more to see and do…

Too bad Interbike is for bike industry types only. This would be like walking into a candy store for me. Keep posting pics of the good stuff.

Well, next year the show will be in Anaheim, so perhaps you can whip up the thousands of SoCal customers living in the area and get them to demonstrate outside the convention center for a Public Day. Frankly, I wouldn’t be at all opposed to having the last day of the show be re-set for the general public.

But that day would be very different in scope and in feel from the rest of the show. It would have to be.

Not all of Interbike is like Pedal Nation. Lots of it is meetings, appointments between retailers and distributors, and seminars designed for retailers to help them serve their customers better. If you’re a member of the public this stuff is boring. If you’re a retailer, you don’t want to share that time with the public.

Frankly, a little separation between retailers and the buying public is good now and then because the space helps us to recharge and develop ideas to help us help the public better.

So when the show moves to Anaheim, I suspect having an open day for the public will be part of the discussion. I certainly support the idea and I’d guess other retailers do as well. Patience.

the Lezyne floor pump is fabulous. It’s got a screw-on fitting (both presta & schrader) so no more wrasslin’ & tuggin’ & pullin’ to release the pumphead. I tried it once and was sold – if you air up right regular, you deserve this luxurious pump.

sweet, looks like I’ll get that e-bike report I’m looking forward to… (:

Sorry, can you explain how that works? That sounds it might be marketing spin to justify 20 lbs. of SLA batteries….

Here’s my beef with floor pumps… why does nearly everyone put the gauge on the floor – as far away from the person trying to read it as possible?!? For crying out loud, put it at the top of the pump housing.

I know, it’s because at the bottom is the simplest design to manufacture. However, people who are going to buy an overpriced, name-brand, trendy, $100 pump will pay the $5 in extra tubing and fittings to move the gauge to the top.