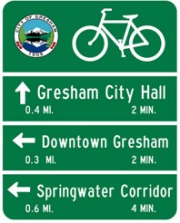 Gresham has installed over 100
wayfinding signs.

The City of Gresham (our neighbor about 13 miles east of downtown Portland) has officially made it onto the bike-friendly map. On Wednesday, the League of American Bicyclists awarded Gresham a Bronze level Bicycle Friendly Community designation.

Kevin Belanger, who works in Gresham’s Transportation Planning department, says they’re proud of the distinction and that “We’ll be using it to push ourselves even further.”

The recognition is likely due to several recent projects that show the City of Gresham is getting serious about bicycling. They’ve recently updated their official bike map and the Gresham Bicycle Guide, which will include the map and other useful information. 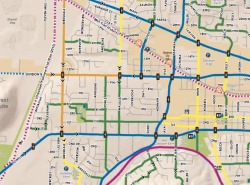 Thanks to a lot of volunteers and a $50,000 grant from Metro, the City of Gresham has also installed over 100 new bike wayfinding signs. The signs — nearly identical to the signs installed in Portland last month — have been placed along major bike routes and include directional arrows and travel time estimates to key destinations.

With their proximity to the (freshly paved) Springwater Corridor Trail, the under-construction Gresham-Fairview Trail, and a planned off-street trail along the existing MAX light rail line, Gresham is well-positioned to have an excellent bike network. And, as we’ve seen in Portland, when the number of good bike routes goes up, so will the number of riders.

Do we have any readers from Gresham? Are you feeling the momentum? We’d love to hear from you.

the new Gresham bike map is very nice — & I’m looking forward to the extension of the north-south trail, eventually connecting the Springwater with Marine Dr.

does this mean we can’t make fun of Gresham anymore? at least we still have Troutdale…

This is really great news! Thanks Jonathan!!!

In addition, Gresham is a far more business friendly environment.

“In addition, Gresham is a far more business friendly environment.”

Not only is that off topic but its an opinion with zero evidence.

Not really that far off topic. What good are tons of bike lanes if nobody can afford to operate a business in the city of Portland?

I commute from Portland to Gresham. The improvements are fantastic.

Has anyone rec’d the Gresham-Fairview trail recently?
Is it really going to be complete from Halsey to the Springwater in December?

I’m waiting for word that the last section of Springwater has reopened. Unfortunately, the repaving seems to have attracted more riders of the wrong kind- motorized 2 stroke scooters.

The 2 riders yesterday were wearing full face helmets although they weren’t as reckless as the guy on the 205 path speeding past cyclists, strollers and Max riders Wednesday by Foster road.

Oh yeah- THAT’s why there are no businesses in Portland and we all have to bike to Greshem to find an open business.

The improvements made this year on the outer east side in general and Gresham in particular have been tremendous. If you haven’t biked out there recently I would strongly encourage folks to do so.

This would be sweet,yes?Red Sunset park,Highland Park, Gresham City park….

I also commute daily to Gresham. Yes it’s getting better, and I think bronze is appropriate; recognition for strong work in the right direction, but also plenty of work to do to make Gresham truly bike friendly. Drivers are definitely becoming more aware of bikes. But the fact remains that – unlike Portland – it is still nearly impossible to go through the heart of Gresham from one end to the other safely by bike. A lot of the recent infrastructure improvements are on side streets and in already fairly quiet neighborhoods. A white stripe and a bike stencil is still not going to get the average Gresham-ite riding on Burnside or Stark; it’s going to take more serious traffic calming engineering to make that happen.
The proposed trail paralleling the Max line from Ruby Junction to City Hall will help A LOT. So will the completion of the Gresham-fairview trail (check out the awesome new pedestrian bridge going up over Powell!). The Springwater re-pave was completed this week. Last section is still (officially) closed as they stripe and install the bollards, but the teeth-rattling traverse of Powell Butte is now a thing of the past. It is smooth!
Next up – safe routes to schools in Gresham, bike trains, and new the new middle school bike club Wheelz.

Gresham is a fun place to ride, I do not like division street to many unfriendly drivers who throw you the occasional high heater.

I also ride out to Gresham from Portland, and I agree with mmann. Things have been getting better, but when I talk to my coworkers about biking, they point out how many of the bike lanes in Gresham are on 4 lane streets, making it feel like you are just an afterthought. Plus, because Gresham’s neighborhoods are more twisty & turvy than SE Portland, it can be hard to find a good route through the neighborhoods.

It will be a huge help when they complete the trail along the MAX tracks from Ruby Junction to City Hall, as this will allow folks who follow the “Main-Mill-Market” route out towards Gresham a good ending to the ride, instead of a trudge up the Burnside hill with traffic zooming by at 45 mph.

But I think the transportation planners at Gresham are working hard to improve the system, and it will take some time to get the system in to really good shape. I’m happy with every small step. The Gresham Fairview trail, and how it will soon connect with the Springwater is going to be a boon to Gresham and the whole region.

Keep up the good work Gresham!

I’m not sure why I go to Gresham other than I have to ‘cuz I work there.

But I love that Springwater! They should call it *Sweet*water.

I ride west on Burnside ….about a block before you reach the Ruby Junction MAX station (abt 199th ), the bike lane just vanishes ..there isn’t enough room in the traffic lane for a slow moving bike, so I am forced up onto the sidewalk..not very “bike friendly”

No, spiffy, you don’t have to stop. Those of us who live here are used to the small minds and small worlds of those who think making fun of geographic areas is entertaining.