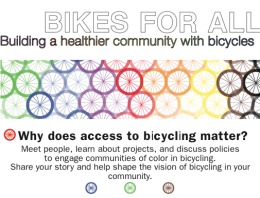 An event tonight being presented by the Community Cycling Center will seek to raise the issue of equal access to bicycling. “Bikes for All: Building a healthier community with bicycles,” is part of the CCC’s ongoing effort to address what they see as a lack of ethnic diversity in Portland’s biking population.

When we first covered their efforts back in October 2009, CCC Director Alison Graves told us, “The people riding and making decisions about bicycles is a white, middle class group.” Since then, Graves has busy speaking about their Understanding Barriers to Bicycling project and raising awareness about the issue anywhere someone will listen — including a presentation at the recent Trek World show in Madison, Wisconsin. (I delved further into the Understanding Barriers in this post from back in April.)

Tonight’s event will include a panel discussion with Graves, along with Shelli Romero, a community affairs manager with the Oregon Department of Transportation; Leslie Esinga, the “community builder” with the planned, mixed-income New Columbia neighborhood; and Joseph Santos-Lyons from OPAL Environmental Justice Oregon, a non-profit group that helps empower low-income communities.

The “Bikes for All” event promises to be an opportunity to, “Meet people, learn about projects, and discuss policies to engage communities of color in bicycling. Share your story and help shape the vision of bicycling in your community.”

On August 26th, ODOT, the City of Portland, and a host of other partners will keep the equity issue at the fore with the first annual “Equity Bike Ride,” which is also being held to highlight existing and upcoming improvements to the I-205 path.

That’s funny, most of Portland is white. When I lived in Los Angeles and San Fran, we didn’t have this issue of colored people riding bikes since there’s a whole lot more.

Nerds on bikes is more apt. How many of each color is made of nerds?

In just over a year, we have worked with more than two hundred people at New Columbia and Hacienda to get bikes and learn how to ride them safely. More importantly, we’re working together to develop new ideas for programs and other projects. It has been such a positive experience for all involved, working together and building connections.

Please join us if you want to hear some inspiring stories and get involved with next steps.

Bikes for All? for all what? odd name choice.

Oh, FFS. Yes, I am a small sampling. But as a minority, I find attempts at diversity to be contrived at best, and more often insulting. Claims that cycling is somehow less accessible to minorities smack of trying to justify your existence by manufacturing a problem that does not exist.

“Hi there underprivileged minority. Want to ride a bike? We have a program for that!” Sounds so much like white guilt.

It must be nice to have the time to worry about problems that don’t exist.

Don’t listen to Wayne. Is their gonna be free cake?

Anything that helps more people become comfortable on bikes sounds like a good idea.

A few years ago when the Women on Bikes rides were written up on this blog, the comments were full of negativity — people dismissed the value of targeting a specific sector of the population or got offended by the notion of a women-only group or just made random negative jabs for no apparent reason. Well, that program was (and continues to be) very successful, despite the naysayers. It looks like there’s a similar reaction brewing to the Bikes for All program, which is yet another program targeted at a specific (albeit very broad) sector of the population.

It’s clearly not going to work for every person of color (Wayne Myer doesn’t sound interested in it), and lots of people will wonder why such a program is even necessary. However, there are many real and perceived barriers to cycling, and many easy (but not necessarily readily apparent) ways to overcome those barriers. In my mind, any program that has a focus and a strategy for helping non-cyclists or hesitant cyclists to become confident cyclists is a good idea. Sounds more like targeted marketing than white guilt to me.

Martha#6
I like this dialog- mostly because I struggle to understand it. What are some real barriers to cycling? What are perceived barriers? Is “many” less than 6, or greater than 16?
No negative jabs here-just curiosity, with some alliance with Wayne’s thoughts. What was the problem? What was the control? How is success measured? It sounds dry, but without peer review, claiming a need or a success is hollow, and credible grant sources will smell that.

I glad the CCC and others are asking these questions.

It is in everyone’s interest to have more people cycling and non-whites are a rapidly growing percentage of the population that- by all indications- chooses to bicycle less.

There are probably lots of reasons for the mode choice disparity; ‘non-white’ includes a very wide range of ethnic groups. But understanding the barriers is the first step to getting more people on bikes.

The intent is positive so people LIGHTEN THE F UP! Don’t be so damned sensitive and have some fun with it. Geez. The problem with race relations today is that everyone is offended at the drop of a hat. Especially feminists.

that liberal white guilt again. When are you gonna understand a lot of folks out there view bikes as something for the poor and make every effort to stay away from them. In fact they’d rather drive a $500 car than ride a $5000 bike.

Well, it would be interesting to have a summary (with statistics) over time on the progress of Community Centre’s efforts. Sorry I can’t be there..I’m in Canada’s Pacific Rim city, Vancouver where Metro Vancouver has some seriously huge populations that aren’t Caucasian.

May I suggest extra stuff to integrate cycling into people’s consciousness beyond bike rides (which are great to show people good cycling routes that are doable):

1. Bike valet parking at major ethnic/cross-cultural festivals and other non-cycling events..where people can get there by bike and relieve car congestion.

2. Send press releases to major local ethnic press. If you keep it short, then it’s just less time-consuming for them to translate it to their target audience. Provide even 1 or 2 photos..especially with cyclists that are diverse.

Last summer, the Canada Line rapid transit line that hooks up between downtown Vancouver to the airport in Richmond,B.C. got huge publicity in local and national press. This includes the new bike bridge that hangs underneath the aboveground transit track that crosses over the Fraser River. The local Chinese-language media press gave sufficient press coverage here (we have tv, news and radio). By the way, I don’t have an interest Chinese media: because I can’t read/write it. I simply noticed who was there at the opening day site for the press and public.

At the same time, same place there was a First Nations (native Indian) group from Musqueam nation who were present, partially to promote their own community cycling efforts.

The problem of perceived inequities vs. real inequities also gets muddled with the fact that within the cycling community we have different cycling cultures, foci and cliques.

I also wonder how bike shops also deal with their customers. It’s nice to think staff treat all walk-in customers equitably but even for experienced female cyclists, they nearly have to be firm and insist politely on a level service. I recall one bike store owner thought it was great he had a staff member who couldn’t speak English well, but spoke Japanese. Great for the Japanese visitors and some international Japanese students that we get who come to Vancouver for a few months to learn English.

It’s so interesting to read the breadth of comments whenever Jonathan writes about this topic.

Allow me to clarify: we began the Understanding Barriers to Bicycling Project because we observed what seemed to be a gap in bicycling in our city. It was based on the fact that 26% of Portlanders are people of color. We did not observe a similar proportion among people riding bikes. We wondered if that was due to lack of interest, or if there was interest but some unaddressed concern. Instead of making an assumption that people of color just didn’t want to ride bikes, we asked.

We found out that more than half of the people of color we talked to had and rode bikes regularly. However, the cost of bikes, safety concerns, and lack of information that most readers of Bike Portland most likely take for granted (where to find bike routes, what sharrows signify, etc.) prevent quite a few people from riding regularly or at all. More about these topics and process are detailed in our interim report .

Furthermore, we also heard (and observed) over and over again that there is a woeful lack of representation among transportation decision-makers. We wondered if that impacted program and infrastructure investments. An equity gap analysis by PSU (from page 120 of the Portland Bicycle Plan for 2030) demonstrated that where the highest percentages of people of color reside, the bike infrastructure is the weakest.

So, we’re working together with our partners (Hacienda and New Columbia) to address the concerns. In doing so, we’ve found neighborhood champions like Egbevado, who received a bike through our Create a Commuter program this summer. He is so fired up about bike safety that he keeps giving his helmet to kids in his neighborhood. At the Bikes for All event the other night we learned that he’s starting to lead rides and he’s got one scheduled for Monday morning.

We have met many people like Egbevado and we wouldn’t have if we didn’t ask.

Together, we are building the kind of community we all want to live in; where people of all backgrounds use bicycles to stay healthy and connected.