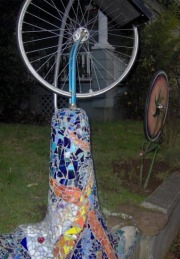 Matt Schekel was 27 years old when he was struck and killed while riding his bike by someone operating a produce truck who ran a stop sign at SE 37th and Taylor. The year was 1997. This Thursday, August 19th, Schekel would have turned 40 and a Portland woman has planned a ride to remember him.

Kasandra Griffin says she didn’t know Matt, “but the crash made a big impact on me.”

In a search of The Oregonian archives I only find an obituary listing for Matt, which describes him as having been a bicycle messenger downtown. He also worked in the a/v department of Wieden + Kennedy and was a student at Portland Film Institute.

A memorial sculpture for Matt remains at the intersection where he was hit (the sculpture was created by City Repair in 2002).

“Please join us that evening [8/19] for a gathering at the intersection, followed by a short memorial ride…. honoring Matt and all the other cyclists who have been killed while riding. It could have been any of us.

Wear white, if you can, and we’ll be a ghost-bike-mass. Bring blinky lights. And bring a sweet memory of sometime this summer… or of the past thirteen years… that you wish Matt had been able to share.”

I was still in college in Santa Barbara when this happened. But given the memorial and Ms. Griffin’s feelings, I can only imagine what a major impact this had on Portlanders at the time.

In an ironic note. Keren Holtz, OBRA Woman Cyclist of 1995, lived on the corner of 37th and Taylor when she first moved to Portland. Keren was struck by a drunk driver in February of 1997, and died of head injuries. She is remembered in the OBRA racing community for her devotion to sport and her giving to women, juniors and others interested in cycling.

Thanks for the post, Jonathan. If anyone wants to be involved in planning or leading the event — especially anyone who knew Matt — please contact me. kasandra@depave.org.

Hi, Jonathan,
Actually, The Oregonian has written several stories about Matt, including one that I wrote about his life and memorial in 2001.
Cheers,
Joseph Rose
The Oregonian

what happened to the driver?

Since the O’s site is a bit hard to a search could you post some links to those articles?

Thanks for that Joseph… I searched The Oregonian archives for “matt scheckel” and “matthew scheckel” and all i could find was the obituary listing. if you can find links to your stories, I’d love to add them.

can’t understand why anyone would use 37th and taylor when you got 39th and hawthorne just a few blocks away.

Jonathan/Joseph,
The reason Jonathan can’t find more Matt stories in the O’s archives is because the O’s archives SUCK. Multnomah County Library has started providing The Oregonian archives on their web site but only through 1972. Hopefully MCL’s O’s archives will be up-to-date soon.

Matt, what a sweet guy. I did not know him that well, but his enthusiasm was infectious. I took a couple of classes with him at the film center, where a couple of helpings of ego-centrism usually spoiled the personalities of those in classes. Not so with Matt, a truly humble yet loyal spirit. He understood what a collaborative art form was and took on any role as essential. In a world where there were no budgets and only people more interested in what they’d become than what they were doing, Matt’s keel was set and passion filled his sail.

The last time I saw him, that same passion he had for learning the craft of film-making had met its match in his passion for riding a bike. To think this positive force was squelched through a misapplied use of mechanized force is tragic.

I’ve never understood how Oregon cannot craft a simple law that removes the privilege of driving for 5 years automatically if you are found at fault in a fatal accident with a law-abiding bicyclist, 1-3 years in a non-fatal incident. In a community where the cops spend more time harassing bikers than enforcing the laws, at least create some laws with real consequences that would have people reconsider rolling stops or what is a safe distance for the bicyclist that they feel it’s ok to buzz on a pothole-ridden street during a high-pollen count sneeze-inducing day.

and while i’ve missed this and past opportunities to celebrate matt’s graceful contribution in his lifetime, i’ve got to say this town has learned little. sadly, in this civil-rights eroding bike-lane loving “bike-friendly” city of portland, the city that does not work cannot quite grasp the concept that if you are supposed to be allowed to drink at the water fountain, you should be allowed to drink at the water fountain. just enforce the rights that already exist vs. pretend there is subclass of nuisances deserving of any unintentional or negligent actions of others with a lethal imbalance of power.

sadly, i think this was embodied by the actions of portland motorcycle cops intimidating some emotional cyclists with their motorcycles trying to “prove” their crowd control efficacy after a critical mass turned into an emotional rally shortly after another drunk-driving death-giving accident that i believe involved multiple cyclists not far from matt’s collision with death.

way to go PPD! perhaps you could have spent a fraction of that over-time in putting one undercover bike cop on the street to start taking aggressive drivers off the road and perhaps begin a slow process of returning the roads to represent a reflection of the laws that exist. . . and if that means bicycles with insurance and licenses, bring it on, and i will swallow my libertarian streak.

to matt, to biking, to justice, to too much. . . sadly, the lesson of matt made me leave bicycling a long time ago. portland you depress me with a faux progressiveness packaged in capsule of sustainable righteousness that ignores the simplest tenets of equal rights that already exist. i better stop, i am clearly in need of some emotional traffic calming device that will bring some car in dangerous proximity to me the next time i get the courage to hop on a bike again.

jc, thank you right now! Your loving reflections of Matt and your sensible appeal for better police support for biking in Portland really moved me. I live in Pullman, and knew Matt and his family in the 80s. Now our 20 year old son lives in Portland and relies on his bike for transportation. You have a strong voice and I am thankful to have found your post. Rylee