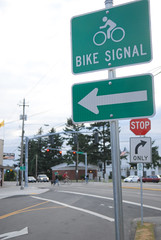 The new bike-only signal at NE
Alameda and Sandy was
one of several highlights
of the ride.
(Photos © J. Maus)

Instead of their usual monthly meeting at City Hall, the City of Portland’s Bicycle Advisory Committee took to the streets for their annual bike ride last night.

The idea of the ride was to share some of PBOT’s recently completed and upcoming bikeway projects with committee members and other interested citizens and advocates. Notable faces on the ride included author and reporter for The Oregonian Jeff Mapes, Portland Police Officer (and BAC Vice-Chair) Robert Pickett, Mayor Adams’ Chief of Staff Tom Miller (riding his daughter in a bakfiets). Also joining us were several of bike planning professionals from around the region and the state including the biking and walking program coordinator from the City of Wilsonville Jeff Owen and City of Eugene planner David Roth.

Below is a detail of the ride map followed by a few highlights. 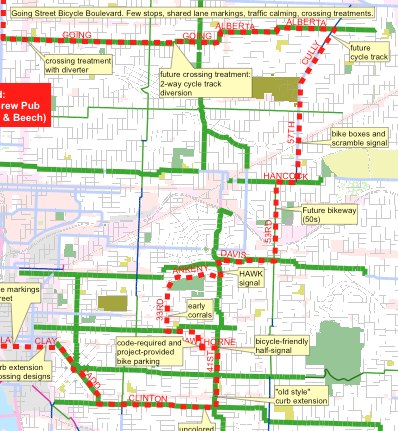 This ride was the first time I took the SE Clay Street connection to SE Ladd, and I liked it much better than taking Hawthorne the whole way. Clay has been the focus of a large-scale PBOT/BES green street project and it is called out as a key bikeway in the City’s Bike Master Plan. An added bonus is the street’s unbroken connection directly to the Eastbank Esplanade through a multi-use path west of Water Avenue. 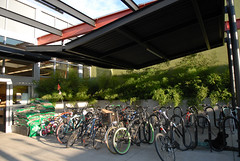 The next thing on the ride that caught my eye was the newly remodeled Fred Meyer store at SE 39th and Hawthorne. The store is full of green features, including a massive and covered bike parking structure placed right up front near the main entrances. Kudos to Fred Meyer for getting that right (well, everything but the use of ribbon racks). 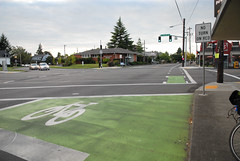 Looking north on 57th at Sandy.

From southeast the ride headed north through what will someday be the 50s bikeway. We stopped at the sprawling intersection of NE Sandy, Alameda, and 57th. PBOT bike coordinator Roger Geller called this “the most innovative collection of bikeways at any intersection in the city.”

PBOT has recently finished a project to tame this intersection that includes green bike boxes on 57th and the city’s second bike-only traffic signal (PBOT calls them “bike scramble signals”). The new signal is to help bike traffic on NE Alameda make the long, 110-foot journey across Sandy and 57th. A new “Bike Signal” sign directs people to a button and when the bike signal is green all other traffic stops. 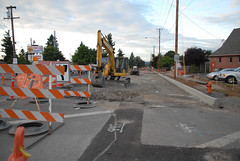 Up the road from Sandy we all stopped at the construction site of Portland’s first (real) cycle track coming to NE Cully Boulevard. The new cycle track will be a 10-foot wide bikeway that is physically separated from both people walking and driving (I went into more detail about the plans back in November 2008). The cycle track is part of a $5.5 million project that will completely reconstruct Cully from NE Prescott to Killingsworth. The project is slated for completion by Summer 2011. 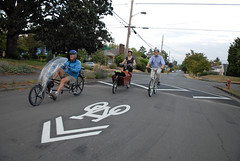 From Cully we headed west, via the City’s premiere bike boulevard on Going Street. Geller called it “the best bike boulevard in the city right now.” Mark Lear, the special projects guru for PBOT in charge of their bike boulevard projects told us how they’ve flipped 19 stop signs and added 30 speed bumps to make the street a true “family friendly bikeway.” The experience riding on Going is truly fantastic. From NE 72nd or so until N. Williams, you really only have to stop a handful of times.

As most rides do, the BAC tour ended at a pub where serious bikeway development discussions lasted long into the night. Learn more about the BAC on the City’s website.

Sounds like a great tour! I wonder if one of the attendees might be willing to re-do the tour for a bunch of civilians?

Too bad the tour didn’t include a spin over the Morrison Bridge from east to west during rush hour to get a feel for just how clunky the connection from Water is.

Now, I appreciate our relatively awesome infrastructure, but the poor design (or perhaps implementation) of this connection is kind of mind boggling.

Still hoping for a repave of Going between 33rd and 34th when they add in the signals and cycletrack on 33rd. It’s pretty abysmal condition there on that block. It’s not too awesome between 40th and 41st either but not nearly as bad as the first block mentioned. I’ve reported it to the city twice.

Going St. is the best bike boulevard in the city? I’ll have to try it again. I took it shortly after the stop signs had been turned, and didn’t care for it. Getting across NE 33rd was a hassle, there were a few spots where the road is in terrible shape, and I really didn’t like all the speedbumps. (The one on SE Ankeny, by comparison, as much less bothersome.) Plus the sightlines crossing some of the busier close-in streets aren’t as good as they are if you take Skidmore, which for now anyway is still my preferred option. And I like the views from Skidmore, anyway. 🙂

Guess I’ll give Going another try after it has settled in for a bit. Maybe I can figure out how one is supposed to get over I-5 from there.

The changes to Alameda/Sandy/57th are excellent, though.

Are there other Going-style stop-sign changes in store for other bike boulevards? It would be great to see the four-way stops at SE Lincoln (or is it Harrison?) & 25th or so and at SE Taylor (or is it Salmon?) & 25th or so turn into two-way stops favoring east-west (ie, bike) traffic.

Why is the bike signal pointing to the left of the road? Is this a T-intersection, or are they really putting through traffic on the wrong side of the road at this intersection? Why doesn’t the right turn sign have an “except bicycles” placard as required for a turn lane exception by the MUTCD?

Also, what’s bike friendly about a speed table? couldn’t they have put a choke there? Or cushions, such as these you find on 155th Avenue in Beaverton, that allow emergency vehicles and bicycles and their potential trailers to bypass the obstacle easily?

hey! Come out to Parkrose where it’s basically signing your own death warrant to ride a bike. Of course if “outer” Portland is considered NE 61st, we don’t stand a chance out here. Oh well, I guess I’ll just keep paying those high property taxes and get nothin’ for it. Thanks Sam.

i erred in calling 61st and Tillamook “outer” portland. I have edited the story now.

also, a few years ago, the BAC ride did go to outer east portland.

Did it really take you that long to ride the Clay connector, JM?

You ought to get out to South East more often!

Let’s do breakfast next week at TOAST, 52nd and Steele. A new bike corral just went in there.

I live out on 76th and I will second the opinion that Skidmore would have been a better choice for the bike boulevard. I believe it was rejected due to the difficult crossing at 33rd but going really isn’t any better and skidmore already had the great built in diverter at the school at 66th. Also in addition to the problems with poor paving which will hopefully get fixed aren’t there several places like rigler elementary and at 72nd where going does not go through? You can ride skidmore all the way to 82nd although at the end it is currently a dirt path. This is actually a big benefit though as it could be paved into a bike path and it also acts as a diverter on skidmore… Maybe we can just make 2 bike boulevards…

I like the talk about the 50’s bike boulevard, but it underscores the bias in east-west infrastructure vs north-south. There’s still no good north-south route through all of SE between the Esplanade and I-205. The 40’s boulevard is ruined by the absurd crossing over I-84 at Hollywood (how did THAT pass the sniff test?). There should be one at either 28th or 20th (or both), and 11th/12th should be set up like Willians/Vancouver, with a good crossing over I-84 at 12th that doesn’t endanger northbound bike traffic once they cross.

I love Love LOVE what they did to Going St. It’s now my go-to street any time I need to go east/west in NE. Great job!

“Kudos to Fred Meyer for getting that right (well, everything but the use of ribbon racks).”

I don’t understand. Is there something wrong with ribbon racks? I’ve never had a problem with using them.

I don’t understand. Is there something wrong with ribbon racks? I’ve never had a problem with using them.

Everything. They encourage people to park too close, don’t allow enough space in and out, and relatively easily damage bicycles due to their awkward arrangement and tight spacing. They’re completely unacceptable when staple racks are easier to use, easier to install, and cheaper to purchase.