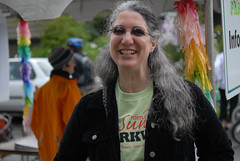 Everyone’s getting excited about the Sunday Parkways event coming up in East Portland this weekend. Despite a change to the route due to a repaving project on the Springwater Corridor, it will still be an excellent opportunity to enjoy carfree streets and explore neighborhood parks with thousands of fellow Portlanders.

However, unlike previous Sunday Parkways events that rolled through areas where people on bikes are common, the East Portland edition reaches places where biking — or the infrastructure that goes with it — is not nearly as established. I’m curious how the event will look and feel in a part of our city not known as a cycling haven.

Can you share some highlights of the route? What things are not to be missed?

Tikes Bikes at Lents Park is another thing I’m excited about. There will be three bike ramps and balance bikes for children ages 1 – 5. And of course, The Sprockettes perform at 2pm on the tennis courts in Ed Benedict Park.

Lastly, the Ramona Street Fair is a new twist. Lents Neighborhood folks pulled this together. It is just west of the I-205 bike path south of SE Steele and north of Foster. Take a look at the location on the attached map. More and more fun….”

What was the reception to Parkways in general from citizens and from business owners in East Portland compared to other places you’ve brought the event?

Just like we have seen the first time in every Sunday Parkways neighborhood we do hear some grumbling from neighbors. This area also felt a bit blindsided by the addition of the Holgate buffered bike lanes going in. With such difficult connectivity issues in east Portland, it is tougher to get out and ride – so we have a real need to be there to show some of the new routes like the newly completed Bush Street Bike Boulevard section through the park.

The corner store on the route at around 111th and Harold has a poster up and will be gathering some feedback for us on Sunday Parkways from neighbors. I’m looking forward to hearing what east Portlanders say after the big day.”

Do you see this event as being a catalyst for active transportation and raising awareness of biking and walking in East Portland?

“I do see Portland Sunday Parkways as a way to knit these very changing and diverse neighborhoods together.

When our volunteer management team went out to ride the route a couple of weeks ago, the parks we rode by were filled with families and young people enjoying the parks in the evening in lots of sports games and activities. Many of these families were people of color and spoke many different languages. Traditionally these neighborhoods have been lower-income white families. I am hoping that Sunday Parkways gives these neighbors a chance to literally play in the streets together – whether they ride their bicycles, walk, stroll or just enjoy the fun healthy activities in the parks. And bicycling is a really good way to have a healthy active lifestyle.”

Do you still need volunteers?

“Yes! We especially need folks to work the afternoon shifts and helping with event clean up at 3pm. They can sign up at PortlandSundayParkways.org“

Despite the success of Sunday Parkways, the budget issues are well-known. How are things going with donations and budget goals for the remaining two events?

“We still need to raise $93,000 to meet our budget goals. As you know, people can donate online if they’d like to help out.”

Thanks for taking time to answer my questions Linda. You and your Options team have given us all a huge gift and we appreciate your work on Sunday Parkways. See you on the streets!

I’d still be interested to see a breakdown of costs of Sunday Parkways. I happily put my contribution into the bucket on Linda’s table along the North Portland ride, and am frankly a bit surprised that since you wrote about this issue the total deficit has only shrunk by $2,000.

i would think signs that tell people how much it costs to put on a sunday parkways event divided by the expected attendance would show people that it only takes a few dollars a person to contribute.

It seems like a large portion of the cost for these events is the cost of PPB officers to (wo)man intersections and direct traffic. Is that right? If so, why can’t the City simply close those intersections and put up detour signs. Seems like that might be a lot cheaper and not be a big deal for motorists since it’s a Sunday…

Velophile @#4
I suspect that the staff time to deliver, put up, take down, and retrieve that many signs adds up too. Even a rough breakdown of the costs among different staff categories, flyer printing, etc. would help clarify this and other questions.

In 2008, after hosting the first Sunday Parkways, PBOT wrote a report and how-to manual for the use by other communities. The manual includes a sample budget. You can see it here.

I am pretty sure that the 2008 event was much more expensive than subsequent Sunday Parkways because they had more traffic control done by police than by volunteers, so this should be seen as a high figure, but it still gives a good breakdown of the activities and range of costs involved in putting on this event.

Thanks, Jessica.
That is very insightful.

most of the police were at the major intersections. The volunteers set up the signs at the smaller intersections and directed traffic. However the officer ws kind enough to set up my barriers before I arrived at my intesection.

Yep, very interesting. Police overtime is almost all of the ~$20k traffic control budget, but that budget is only a fraction of the total budget (~$150k).

Looks like most of the money is spent on planning staff time and outreach. Together, those are about $90k. Not sure how you shrink those unless you hold the event along the same route on the same date each year…

I think we should only do 1 sunday parkway a year. We should also tie it in to rose festival

Jim, please explain. Otherwise you come off as a bike-hating a-hole.

My question would have been why outer east Portland was completely neglected. SE 1115th-181st is never included in anything Portland does.

I dont hate bikes.
I hate people that spend money unnecessarily that we dont have. The city cant afford this. We cant even fix things that are broken and need repaired.
What a waste.

If we tie it into Rose festival there may be funds to help finance it.

just dont take my credit card and go have fun.
How many years will it take us to pay for fun?
There is no such thing as free money, Obamas plan is disasterous for our children. They will be paying their whole lives for what he is doing right now. Portland does not need to follow suit. It would be better if for something like this if they had the money to pay for it from a legitimate source before the event takes place. No not more money from my sewer bill