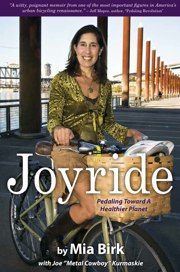 Mia Birk, the woman who fought in the trenches to put biking on the map in Portland back in 1990s, is now gearing up to promote her new book, Joyride: Pedaling Toward a Healthier Planet.

Joyride is Birk’s first foray into the publishing world and she’s doing it with the help of seasoned author and fellow bike activist Joe “Metal Cowboy” Kurmaskie. Kurmaskie helped Birk write the book and he’s also behind Cadence Press, a new publishing company which which will make Joyride its first title.

Joyride chronicles Birk’s 20-year crusade to make biking normal in America. She started in Portland as the City’s bike program manager in 1993 and oversaw (what I consider to be) the golden age in the development of Portland’s bike network. Working under a Transportation Commissioner named Earl Blumenauer (now a member of the U.S. Congress), Birk helped Portland become one of the most bike-centric cities in North America. 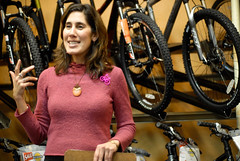 Birk speaking at a fundraiser
for Earl Blumenauer in January 2008.
(Photo © J. Maus)

After her tenure at PBOT, Birk became a consultant and is now the CEO and co-owner of Alta Planning + Design, a firm with 60 employees that develops biking and walking projects in cities around the world.

In Joyride, Birk shares her experiences and, with a hopeful tone, shows how biking can help a number of ills facing our country. A press release for the book states, “America needs to go for a bike ride”. Here’s an excerpt from one of the chapters:

“… If you had told me, when I was a 15-year old miserably trying – and repeatedly failing – to pass the parallel parking part of the driver’s test so I could be a teenage soccer-Mom, “yo Mia, you’re going to be the queen of bicycles,” I would have doubled over in hysterics, spewing Diet Coke out my nose.

And yet, here I am, having watching a steady stream of pedaling, walking, smiling, laughing, talking, weaving families on N. Willamette Boulevard, a long-ago battleground over bike lanes. It is our darkest moments that teach us our greatest lessons, no?

Each challenging bike lane, path, boulevard, and bridge made its way through obstacles and opposition to a place of undisputed success. Not one of these existed 15 years ago. We’ve come such a long way.

And yet, we’ve still got such a long way to go.”

Birk already has a host of appearances planned to promote the book. She’ll be signing copies at the August Sunday Parkways (on SE Lincoln between 35th and 37th) and she’s set to appear at the Trek World Retailer Show in Madison, Wisconsin. According to a spokesperson for Cadence Press, Trek Bicycle Corporation has purchased a copy of Joyride for every one of their retailers (well over 1,000 or so in the U.S.).

You can pre-order the book, read excerpts, and learn more at MiaBirk.com. Also, take a look at the promo video just released a few hours ago…

Can’t wait to read it. Thank you Mia for all your hard work!

Can I get an early release on this?

…really looking forward to this book.

One of my heroes – can’t wait to hear the whole story.

Does anybody know if there will be an audio version published? I searched and the Google Gods tell me nay.

The excerpt shows her inflated ego – the self-defined “queen of bicycles.”

I’m impressed by her work, but not her ego — or her writing, if the excerpt is an example.

The work in the 1990s was done by a whole host of people – and we should note that despite the progress, the city never spent significant amounts of money on biking and it fell behind on its master plan.

So hats off to Mia, and I presume the book will have its interesting parts, but take it all with a grain of salt.

Mia thank you for all the hard work you did. Here’s hoping your book does exceptionally well and encourages others to join in the battle to bring everyday bike riding to the masses.

Gregg,
You can preorder the book @ http://www.miabirk.com and we will get it to you August 10, hot off the press. It’s official national luanch is October but copies ready for sale in august.

Ben,
We are creating ebook versions for the launch, Kindle etc. Audio versions and translations/foreign language rights and the like are in the works but a bit down the road. The best way to help us get it into audio form is to buy a traditional copy. Audio versions and whether it makes economic sense to create one are based on first edition sales.

Jonathan: Any idea about whether or not the book will be on Amazon? Thanks.

The book has been submitted for inclusion on Amazon and will be up there for pre orders starting in about 10 days.

Note: If you preorder the book directly from Cadence Press/miabirk.com rather than Amazon, a portion of the sale goes to local and national bike and ped advocacy programs.

Thanks Joe! Good to keep in mind!

right on, my order is in from her site

Joe (#10) – What about powells.com? That way we can support a local company AND support small press. (buying direct from small press is nice, but buying a small press book from a large distributor encourages them to continue to stock books by small press – there are tradeoffs either way)

I’m not sure that she is saying she became *the* (singular and only) queen of bicycles. Certainly there are many queens of bicycles in Portland, or at least several if by Queens of Bicycles you mean women who had (and have) a positive and lasting impact on the growth of biking in Portland.

since several people have mentioned it… we’ll also be selling the book through our partnership with Powells.com. (we get a cut of the cash from each purchase made through ‘our’ bookstore).

Thanks everyone for your nice comments. The story is about all the heroes of Portland and other places.. from Earl to the City’s traffic engineers to folks like Sunday Parkways’ hostesss Linda Ginenthal and Janis McDonald, the crew who pulled off the Eastbank Esplanade and Steel Bridge Riverwalk, BTA leaders like Rex, Karen Frost, and Catherine Ciarlo, and even a super fellow named Jonathan Maus + many many more heroes. I’ve just been lucky to have been a part of it all.
The “queen” referenced in the excerpt is a reference to an Oregonian article that bequeathed me that silly title, and which has become a running joke.

Anyway, thanks again, and I hope you all enjoy the book!
Joyride proceeds support the various non-profit groups that are helping create a more bicycle friendly world.
Mia

P.S. If truth be known, NOTHING PDX does will EVER top what happens on Tulsa streets EVERYDAY. http://www.youtube.com/watch?v=9MVq2deRbuA&feature=fvw

BTW, the water is much better here. And, it’s way way cheaper.

Congratulations Mia, and thanks for all your hard work over the years to make my hometown such a great place to walk and bike. Can’t wait to read.

Mia has definitely transformed the playing field for contemporary city planners focusing on livability for cyclists and pedestrians alike. Having been a former student of hers, I’m convinced this comes from a well intentioned place, It’s the commercialization (promo video, book title, self-branding etc.) that irks me…sorry.