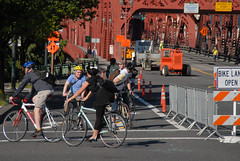 Today was the first major test of a two-month closure of the Broadway Bridge. The bridge is closed due to streetcar track construction until September 3rd, however it remains open to biking and walking traffic. This morning, I heard from streetcar crews on the scene that the south sidewalk will remain open to non-motorized traffic until July 17th. After that, the plan is for the entire bridge to be closed to all vehicles (that means bikes too) for the remainder of the summer. 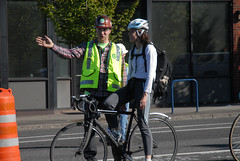 This morning, crews were hard at work laying down the tracks while several of them directed traffic. At least one crew member was specifically enlisted to talk with people on bikes.

A small amount of the morning bike traffic comes south across Broadway from N. Larrabee, but the majority comes westbound down N. Broadway. They were greeted by Jason, a member of the streetcar project crew who directed them across Larrabeee and to the south sidewalk of the bridge. They have split the old bike/turn lane in the southwest corner of the intersection into a two-way bike lane. However, it’s nearly impossible to see the temporary westbound bike lane they’ve made, so nearly all bike traffic crosses all the way over to the sidewalk to head west.


The scene I observed this morning was mostly one of confusion, with people on bikes darting from travel lanes into crosswalks, people in cars turning where/when they shouldn’t be, and everyone generally looking all around for a few moments to figure out what to do.

Thankfully, it seemed as though 3-4 project crew members were actively managing the various cones and barricades to try and make it more clear to everyone.

This confusion is understandable, but hopefully things will get a bit smoother in the coming weeks. If you ride through this construction zone, please let us know how it’s going for you. We’ll forward any feedback to streetcar project and PBOT staff.

I came through about 6:30 this morning and it was very smooth. Two construction workers were actively giving verbal instruction in addition to the new striping that was painted on the road…

I came from the North at about 6:45. It wasn’t clear that the south side was open, but a friendly flagger told me what to do. It’s a 90 degree turn onto the temporary approach due to the barricades. I expect there will be some close calls as eastbound cyclists coming off the bridge find someone coming around the barricade to head west.

As I turned right off of N Flint I thought, “oh yeah! I forgot,” and instead of heading all the way down to the bridge, I hooked around the island that is the fork between Weidler and Broadway and headed up and over to the Rose Quarter Transit Mall. Why not? The Broadway detour is hardly going to be open more than a week so I might as well get used to my new summer commute now.

I didn’t like how crowded the lower deck of the Steel and the west esplanade are. I might try the upper deck tomorrow.

would you be willing to upload a video in addition to photos? 🙂

I live in NE and usually take the lower level of the Steel, but I tried out the Morrison (from downtown) on Friday knowing what the future holds.

The Morrison worked well. It’s not perfect, but I think it’s a good alternative with the reduction in capacity and increase in riders.

Took the B’way Bridge early this afternoon, westbound from NE Portland. Didn’t have any problems; didn’t get any wayfinding advice from any flaggers either. But the markings seemed pretty clear to me.

Nonetheless, I appreciated reading this story this morning, just so I had an idea what to expect.

I think they actually improved the tape and arrows throughout the morning. After a first full day, it looks like a clumsy but plausible effort to wrangle cyclists.

I agree with John L above though, I’m outta there starting tomorrow.

Is it better to ride on the sidewalk on the upper deck of the Steele bridge, or better to take the lane?

Today everthing seemed to work smoother than yesterday. It has turned out better than I would have guessed. The people that work there are pretty darn helpful and friendly.

I took the upper deck of the Steel today; that was pretty smooth. I took the southern sidewalk, so I can see where it might be tight if I met a pedestrian or a cyclist coming the other way. While up there, I scoped out the auto lane on the other side. I think I’ll take that lane tomorrow; it has a “bikes on roadway” sign and there’s no tracks going down Glisan to Broadway.

I love the crew that’s working there! This morning when I and about ten others were stopped at the light one of them came up and not only explained where and how to go, but also recommended that we drink plenty of water. I think we need to hire someone to do that even when there isn’t a detour.

It was pretty smooth today. A quite friendly gentlemen directed us through with good directions. He also said that they have expanded bike/ped access to the 19th.