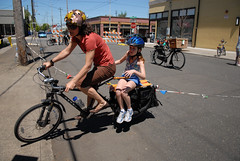 Report
[Link to photos]
Two or three dozen families were on hand for what is the first of many more spectacular Fiets of Parenthood events. Many families arrived with conveyances meant to carry two or more kids, prompting our out-of-town visitors to whisper amongst themselves, ‘wow, we don’t see such variety in Seattle!’ We had variety a-plenty, including both a boat and a pirate bike, and kids ranging from little eensy baby to tweens.

The kindercross race was a smashing success, with such obstacles as ‘Pick up the toy,’ ‘Stop at the stop sign,’ and ‘Carry the flag.’ Special kid-only obstacles like loop-the-loop proved to the organizers that, next year, we’ll need to chalk the course so they know where to go. Three top scorers; Alex, Everett and Carl, all scored 4-lap times in the low-two minutes and proved that growing up in a bikey family is the best route to fame, glory and vast riches. Edie scored a sweet time on a borrowed bike and brought home a special honorable mention award.

In the three-lap parents’ race which included a tough grocery bag obstacle (everyone dismounts!), the best time was achieved by Anne, whose daughter began the course reading a book on the back of the Xtracycle. To throw us off, we think. She showed such skill on remounting the bike while her mom was moving, that she earned her own award. She must have practiced this! Second and third place went to Peter and Travis, with Julian of Seattle’s Totcycle missing third by only two seconds. These are some fast daddies! Scott was awarded a special honorable mention for riding three girls on the back of his Xtracycle — and one of them was his wife.

We had a fabulous, hot and sunny time and so-appreciate the support from host Clever Cycles; vendors Solpops, Trailhead Coffee (Charlie raced, by the way!), and Madison Grill; and beneficiaries Madison Child & Family Services and Community Cycling Center.