The City of Portland has released a new iPhone app that allows citizens (who own iPhones) to document and submit reports on a number of issues. Dubbed the “Citizen Reporter,” the new app is available free in the iTunes App Store.

Saying that open source software “is central to the spirit of democracy” Mayor Adams sees this as a way to increase communication between his office and his constituents and build “greater transparency, efficiency, and accountability in government.”

“I reported a crushed bike rack and got a call for details the next day.”
— From a reviewer in the iTunes App Store

I had a chance to install the app on my phone today. I haven’t come across a pothole yet, but it looks to be quite a nifty tool. Not only can you submit the report (which is then sent directly to the appropriate bureau), but they claim the app will also track the status of your issue and send you updates if/when it’s resolved. There’s a separate “My Reports” window where you can view issue status. It’s also tied into the phone’s GPS feature so you don’t have to type in your location. 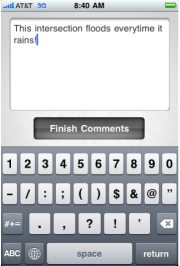 Tell ’em what you see.

According to the Mayor’s office, once the app is out in the wild and being used widely, they intend to add more service request types. There are also plans to release the application for other smart phone platforms.

My hunch is that this app will be widely used by people who ride bikes, since we tend to notice more of our environment than folks in cars or in buses and trains (not to mention that it’s easier to stop when riding a bike). It would be great if they added a “Bike Lane Maintenance” service request option or another one I’m always in need of reporting, “Traffic Light Timing.”

That being said, if you submit a report for something that doesn’t fit one of their pre-loaded categories, I’m sure they’ll still accept it. One reviewer of the app writes, “I reported a crushed bike rack and got a call for details the next day.”

— Check out the app in the iTunes store. For a full rundown of how it looks and works, visit PortlandOnline.com/iPhone.

That sucks. This is going to be used primarily for “community policing”.

Downloaded it a few days ago… a perfect use of technology. Camera + GPS + manually added info can be extremely effective.

Can’t wait til the Motorola Droid version comes out, and here’s to hoping there’s a “crosswalk violation” incident report for the future.

When I was dealing with meth-head neighbors for years in NoPo, was I somehow offending your sensibilities by doing something about it?

I agree with you Jonathan. Those who ride bikes are going to be more inclined to use this. It can only be better than the interminable phone line one has had to use to report junked cars.

tony,
I don’t know the circumstances so I can’t comment.

A “street cleaning request” for bike lanes would be ideal.

That’s right Jacque, you don’t know the circumstances, of my situation or anyone else’s for that matter, which is why your blithe dismissal of “community policing” is baseless.

Just this week I contacted the officer for my NW neighborhood regarding a small homeless encampment nearby. Two days later, the encampment was gone. Where they went is another matter altogether but having an officer be responsive to my request and concerns was a fine thing.

What’s wrong with houseless people? Why not leave out the put downs and describe the illegal behavior.

This tool is only as good or bad as the intentions of the people who receive the data. One problem might be that people get apathetic due to this tool. Often it takes both reporting, and repeat calls back when a danger is not being given priority.

I’m hoping one of the next reporting capabilities will be for abandoned autos, with the ability to attach a photo.

+1 for an Android version! Especially as Linux “father” lives in Portland and now is using Android… http://techcrunch.com/2010/02/07/linus-torvalds-nexus-one/

Community policing is preferred to big gov authoritarian policing.
And another big +1 for an Android version. Realistically, there needs cross platform support for multiple mobile OS’s and not de facto support/subsidy of the Apple paradigm.

That’s great, free open source software, that you have to pay a service provider and Apple +$2000 a year to use!

We used to have community police in the US, and it was a good thing. Cops on foot, as part of the communities, tended to prevent crime. Now, with almost literally all cops it cars…it’s all reactionary policing. There’s plenty of data to support this.

Good start but it would be great if it was available on other platforms. There are more blackberry users out there!!
I think it will be more useful for bus commuters and walkers too.

I was thinking it would be obvious that I would realize this tool could be good or bad depending on the intentions of the people who use it. When will I ever learn.

If you are reporting things to the city, then you are deferring to the authoritarian gov. solution. Why not knock on the door and talk directly to your neighbor… if the circumstances allow.

I realize too that at this point it’s only used to report gov failures… or whatever you want to call it. potholes, etc.
I’m more worried about future uses

From the city’s page:
For questions & comments regarding the City Phone app, please email phone.app@ci.portland.or.us

A quick visit to Wikipedia’s Smartphone page and the headlining picture shows that this app is serving a very select portion of the population.

this seems weird to me. the city just created an exclusive extra avenue for the voices of people who can afford to buy iphone to be heard. strike one for class equality city of portland.

An MMS would work across platforms.

While class accessibility is certainly a factor in the ability use *this application*, I still am able to show up at my local police department, call the pothole repair line/street cleaning line/streetlight line/etc., from my cell phone or someone else’s borrowed phone as a non-iPhone-carrying citizen. This application does not bar lower classes from reporting information to these services. It does however make it somewhat easier or not – depending on your viewpoint of technology – to do so should you be of the appropriate socioeconomic class. This application does not appear to be excluding people from any service since the other avenues are just as quick and accessible in my experience using them. As a non-iPhone user I don’t see this as a strike against class equality in Portland. There are more pressing and actual inhibitors of equality IMHO.

@Casey: What’s the matter? “The Man” got you down? Or, is your tinfoil hat a tad too tight? Or, is everything just glass half-empty for you?

I mean, seriously! Stop and think for a second. Your dystopian position could be unnecessarily used for any advances in technology that get applied to the public sector as a means of communication:

Postal Address — “the city just created an exclusive extra avenue for the voices of people who can afford to buy an envelope, paper, and a stamp”

Public Building — “the city just created an exclusive extra avenue for the voices of people who can afford to roll, walk, ride, scoot, bus, train, drive, fly to go to the building in person”

Your position can be applied to *all* avenues of communication as none of them is universally accessible.

Would you rather they just took our tax dollars but didn’t provide any means for communicating with them? You *do* realize “class equality” is busy playing in the forest with the unicorns, fairies, and leprechauns, right?

I remember BP did a story about pot holes and other hazards in bike lanes. A commenter suggested making an iPhone app to report them.. and here it is!

@matchu – i’m not saying that anyone is barred from reporting information, just that now the information that the city receives about what need to be fixed or dealt with is going to be skewed somewhat in the direction of what people with iphones think needs to be done. it caters to a very small, affluent group of people, who pretty much already have the loudest collective voice in the city as it is. i’m also not saying that it’s that big of a deal. let the iphone fetishists have their app. there are way more important things to worry about.
i just think it’s something worth thinking about. and i hope the city of portland is putting a similar effort towards hearing the concerns of the people who don’t have iphones as well.

@oregongreg – i assume you are trying to provoke me. thats boring. your rebuttal is boring too, and not very well thought through. i could try to comment on it, but, eh, why bother.

A much better version of this same idea has existed for over a year (and as a website for almost two years). It’s called SeeClickFix:
http://itunes.apple.com/us/app/seeclickfix/id322000552?mt=8

In New Haven, we used the website to build enough community support to convince the city to make a new bike route:
http://seeclickfix.com/issues/8658
The city now uses a SeeClickFix widget as an online bike rack request tool: (granted, the keywords they are using to filter issues are in need of some refinement)
http://www.cityofnewhaven.com/TrafficParking/BikeParking.asp#OnlineBikeRackRequestTool
And I’m currently using the site to elicit feedback on preliminary/conceptual design work for a new cycle track that I am doing on behalf of the local bicycle advocacy group, Elm City Cycling:
http://seeclickfix.com/issues/15932
(The head of the New Haven Transportation Department actually came to our group and told us that he wants to build this cycle track this year, but that he lacks the staff time to sell the idea to the public and the Board of Aldermen).