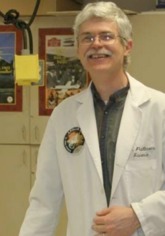 The man who hit and killed Vancouver high school teacher Gordon Patterson as he rode his bicycle in a bike lane along St. Johns Boulevard will face sentencing tomorrow (1/22) at the Clark County Courthouse. Antonio Cellestine, 18, has entered a plea bargain in the case.

The City of Vancouver Police Department has announced a hearing for Cellestine’s sentencing that will be open to the public.

On September 16th of last year, Cellestine fled the scene after striking Patterson from behind with his sedan. Cellestine was later found and arrested for felony hit and run. Patterson, 50, was a well-known teacher at Hudson’s Bay High School.

The public hearing for his sentencing is scheduled for tomorrow at 10:30am at the Clark County Courthouse (1200 Franklin Street).

UPDATE:
A commenter pointed out that Cellestine’s girlfriend held a carwash fundraiser that was billed as a benefit for Gordon Patterson, but she then used the proceeds to bail Cellestine out of jail. From the Seattle Times (via The Columbian):

“An 18-year-old woman has been charged with theft, accused of organizing a car wash for her jailed boyfriend while saying the fundraiser was in honor of a man the boyfriend is accused of killing in a hit-and-run crash.

Vancouver police say Mallory Ewart raised money under the guise the car wash was for the benefit of the family of Gordon Patterson… According to court documents, Ewart organized the Sept. 27 car wash and even got friends to hold signs and yell to passing cars: “Support the Pattersons.””

Read more coverage of Ms. Ewart from The Columbian.

No matter what Mr. Cellestine is sentenced with, yours was far, far more extreme.

My condolences to your family.

any word on what the prosecutor is recommending?

Cellestine’s girlfriend apparently held a fundraiser for Patterson, but used the proceeds raised to bail out Cellestine.

I find this amazing!

Yep. Pretty disgusting. Not sure if that will influence the sentencing terms (or if it even “can”, at least from a legal standpoint).

When I saw that on KGW a few months back I sat there with my mouth agape at the shear audacity of the whole thing.

How about a plea bargain down to the death penalty? Pretty please!

It’s worth noting that this was a marked bike lane, not a shoulder. Either way, it’s unfortunate.

– Plus there is a quick CTRAN 105 express bus to Vancouver from Portland.

In reference to the update I’d like to quote the author, “wow”. Took the word out of my mouth J.

Mallory Ewart is gross, she is pretty much the most disgusting thing to happen in the PDX area in the last year.

Jeremy Jordan’s wife is starting to look human in comparison…

That’s all that was needed to get Cellestine out of jail!

Cellestine was driving with a suspended license. They found his car abanded nearby with heavy front end damage. Will he do this again?

Words fail to convey the depths of sorrow we all feel with the loss of another like minded person.
No one can say just how many more people Mr. Patterson would have influenced, certainly we all have the responsibility to share in this wonderful lifestyle.
Maybe a memorial ride?

Just for clarity, I’d suggest that when you write these updates or any story, you give a date in association with a movable word like “tomorrow.” There are too many assumptions built into that kind of writing. Thank you kindly.

The facts on this case seem movable too. I read initial stories and many referred to this poor victim as 60. Now he was 50?

He only got 5 years and a fine! The kid has felony convitions. His attorney “bargained” to keep this from being a first strike. AND he has previously been arrested for drugs. WT – that’s not cool!

amazing…
Mallory is lower than a snake in snowshoes, but the social construct we live in that allows motorists to slaughter fellow citizens with their cars with minimal consequences will someday be regarded as barbaric. I hope that day come soon.