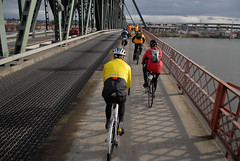 Yesterday the Bureau of Transportation released the final version of the Portland Bicycle Plan for 2030. This version reflects many changes — some large, some small — to the public comment draft released back in October. Meanwhile, the Bicycle Transportation Alliance and a new activism group, TransConPDX are gearing up for a final push to raise awareness about the plan before it’s adopted by Portland City Council on February 4th.

Along with the final plan, PBOT released a seven-page list of all the changes (PDF download here) they made in response to community feedback.

There were a lot of changes made for clarity and consistency. The two most significant changes were a new approach to the “implementation scheme” and an effort to give development of the trail network (as opposed to on-street infrastructure like bike boulevards) more prominence.

The plan initially had a three-tiered scheme that raised the ire of trail advocates (then the Portland Planning Commission agreed) because it placed the popular Sullivan’s Gulch Trail and North Willamette Greenway Trail in the “Tier 2”.

The new implementation strategy (in Chapter 5.3 of the Plan) also has three parts but they have been renamed and re-defined.

According to PBOT, the “Immediate implementation strategy” will focus on bike boulevards but will also “advance” trail projects (meaning support planning studies, not actually build them) and innovative bikeways like cycle tracks. In a nutshell it’s about, “efficiently spending the limited but tangible funding available for bicycle transportation in the near term…” This immediate strategy will focus on projects where funding is likely within five years. In the Plan, PBOT notes that $10-14 million will be available for bike projects in that time period.

What Portlanders will see on the ground in the next five years is a lot more bike boulevards, more cycle tracks, buffered bike lanes, and other innovate things (such as an “advisory bike lane” in outer East Portland).

Next on the list, the “80 percent implementation strategy” focuses on spreading the money around so that 80% of Portlanders are within a quarter-mile of a low-stress bikeway. PBOT sees the “trail system” as the foundation of this low-stress network and specifically calls out three trail projects — the Sullivan’s Gulch, North Willamette Greenway, and Red Electric (which would seek to connect the Willamette River with Beaverton to the west).

The final implementation step is deemed “World class.” PBOT says if the plan was fully funded, they could “establish bicycle infrastructure as an essential element of the urban streetscape.” This essentially means cycle tracks through all major commercial areas and the full build-out of their plan.

While PBOT readies for their big day at City Council on February 4th, local bike advocates are also prepping for the big day.

The Bicycle Transportation Alliance held an invite-only strategy session last month to solicit ideas for how to mobilize the community and follow-up their stern words about the Plan. The BTA is expected to unveil their plan of attack any day now.

The fledgling activist group TransConPDX is also coordinating some activity around Plan. At a meeting Tuesday the group laid plans for a ride and other actions on February 4th. The group is still trying to decide on exactly what message would best capture their position — and the public’s attention — on the Plan. Perhaps they’ll wait and see what the BTA comes up with before making that decision.

An advocacy campaign around the 2030 Plan is tricky for several reasons. It’s a foregone conclusion that the Plan will pass, so there’s not a major sense of urgency on that front. The Plan itself is also one of (if not) the best of its kind anywhere in the country and the process and effort PBOT has put into it is astounding. Some activists have been drawn to a message around “full funding” of the plan or more concrete financial commitments. However, in today’s economy, a bunch of “bicyclists” asking for more money in a city that many people feel already does too much for bikes might not be too smart.

It seems at this point, the main goal should be to use this Plan as a springboard to more effectively “sell” biking to the huge lot of Portlanders who aren’t currently on the bandwagon. Our Mayor and City Council are poised and willing to do more for bikes, but they need a clear sign from the community that it’s something they can — and should — be more bold about.

We’ll see if the BTA and others can drum up the necessary sense of excitement and urgency around this moment in our bike history.

Get the full lowdown and complete downloads of the Bicycle Plan for 2030 here. Read our previous coverage of the plan here.

I think it’s laughable that we get $10-14 million, when just outside my office is an intersection (Cornell & Murray) that was just “upgraded” — read “widened” — to the tune of at least $1 million. ONE intersection. Nearly a tenth of the proposed bike expenditures, spent to ease congestion for a few months for a bunch of suburban drivers before the added traffic will grind the intersection to a halt again.

The 7 pages of revisions leave out a concern raised by myself and others, including 2 members of the planning committee.

The plan will be limited because it only suggests that city staff and departments work together to help bikes. The plan has no teeth in words. Too many city staff are biased against bikes, or say the regulations force them to put cars first.

The tougher language is still weak: “more active language and to reflect that this is the City’s bicycle plan”

I think the smart way to sell bicycle infrastructure in a down economy is that it is the cheapest way to reduce congestion for car drivers.

Don’t try to tell people they need to change their behavior. Just tell them

“look if we take a tiny bit more of the transportation budget and spend it on bicycle infrastructure we can convince your tree hugging neighbors to ride their bikes and you won’t be stuck behind their VW Bus anymore!”

or something to that effect.