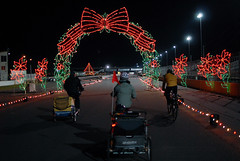 Riding under the lights (and in the cold)
last night at PIR.
(Photos © J. Maus)

Note to event organizers: All it takes to coax hundreds of biking Portlanders to your event — even in temps hovering near the 20s — is to make it carfree and serve free hot drinks.

Last night was the first-ever bike-only night at Portland International Raceway’s annual Winter Wonderland holiday light spectacular. The folks at PIR create dozens of light sculptures and let folks roll around the race track taking in the festive sights. Usually it’s a treat only people in cars can enjoy, but this year, thanks to some persistent nudging from local bike advocates, they had a Bike Night.

I’m proud to report that, even with a windchill that put the temps into the teens, lots of people showed up last night. The best part? Many of them were families with little ones. 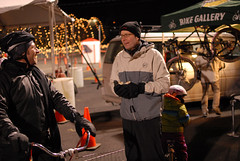 Bike Gallery owner Jay Graves and his crew
were there to help keep
everyone comfortable.

I bundled up my 4-year old, plopped her in the trailer with a bunch of blankets, then met up with two other families en route to the track. When we got there the place was hopping. A recumbent club had arrived on scene, lots of little kids were running around, and there were free hot drinks for the taking.

Bike Gallery stepped up as official sponsor of the event. They provided free hot cocoa and owner Jay Graves even offered his warmed up van for anyone near freezing. Said Graves; “There are more people here than I expected. It’s been great. Right when it opened tonight, there were a lot of families that came through.”

Across the way was Todd Roll and a group he was leading as part of his Pedal Bike Tours ride. One woman was passing out candy canes and others topped off their cups with hot tea. The mood was festive, friendly, and fun. 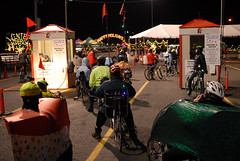 Despite the cold, it was a solid turnout.

With our kids getting impatient to see the lights (who could blame them!), we rolled onto the track. It reminded me of It’s a Small World at Disneyland. I could hear the giggles and ohhhs-ahhhs coming from the trailer behind me. There was lots for them to see, including a huge dragon with a Santa hat on (they loved it).

As the night grew colder, we only made a quick stop back at the entrance before pedaling hastily home to our warm beds. Besides a little accident by my friend Joe (he rode into a cable holding one of the light sculptures and cut open his lip!), it was a memorable night on many accounts. We won’t soon forget the lights or the cold.

Thanks to everyone how made this event possible. Hopefully next year we’ll have a bit warmer weather and even bigger crowds.

Saddly I wussed out last night and got int he hot tub instead.

I did ride in this morning, but the thought of riding over there in the dark with all the wind we had earlier in the day was too much for me.

So fun! Thanks to Jay and the gang for making it happen, they made the whole thing even that much more fun (one of the crew even lent me their blinky for the ride home when I realized the cold had disabled mine!)

I noticed the cable hazard too, next hear I hope to see a bit more prominent markings on them… and the 12th day of Christmas 🙂

Congrats to all the intrepid people who came all lit up for Pedal Past The Lights II- 13 miles was a serious undertaking in that cold! Special thanks to Pedal Bike Tours team members Miles who rode sweep and Scott who manned the free hot chocolate booth. I’ll bring warmer socks next year but I already can’t wait!

We (Esther & I) had 20-25 ride down with us. We decided it was too cold to do our extended Neon Night Holiday Light ride that was originally planned.. but never fear, that ride will now happen on Dec 18, and is now a pub crawl with stops at Neon Bars. More info: http://shifttobikes.org/cal/

I was glad to see at least one local tv station cover this bike event — unfortunately they ended the segment by poking fun at the bicyclists who were willing to brave the cold to do it. My hat’s off (okay, not for very long today) to all those who went out to PIR last night.

After spending all day Saturday AND Sunday at USGP, my hat is off to ANYone who went out there at night for the light show. It was crazy cold during the day, especially on Sunday!

I had been planning to go but I decided to get in bed early and read instead.

It was awesome !
A million times better without the mvs.
I went around five times, woot !
That Jay guy really was nice.
He asked me where I heard about the event.
Ha !

That’s the smoothest surface I’ve ever ridden. Once you’ve sped around 2 or 3 times your extremities are so cold you don’t even feel them! Freezing from your frozen sweat sucks on the ride home though.

I also missed it due to a soccer game last night. Does anyone know if they still allow bikes the rest of the year even though it is not cagefree event?

Lance, sadly last night was the only night bicycles are/will be allowed this year. However, SERIOUS thanks to all those who made it out. I haven’t been in touch with the Global Events Group that is in charge of the event, but will certainly pass along the official statistics and how they feel this first try at a Bikes Only Night went. From what I’ve heard, it was crazy fun.
I think you all laid the ground work for what could possibly be a long running tradition for our beloved bike-mad city.

…and so you don’t all think I just chickened out, I was actually in LA enjoying the mid-50’s downpour all day instead of doing the ride. Sorry to have missed it. Next year for sure!

I went out there late and think we might have been the last ones around the track…it was cold and fun – the animatronic juggling dragon was my favorite! It helped that I brought a insulated thermoses with some warming beverages. Many thanks to PIR and all the BG folks that made this happen!

Mike Nealy, the organizer of the Jubitz Winter Wonderland is asking for comments on how the event went(mike@gegpdx.com). He wasn’t able to be there but wants feedback so he can make a decision on if to host it again next year and if so, how to improve it.

And while you’re at it, thank Mike for setting up this event which he agreed to do even though it loses money for his organization! Thanks Mike and see you next year!