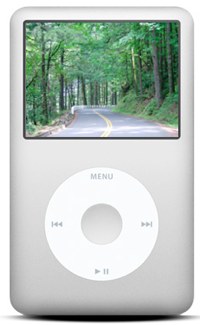 We’re big fans of the Rubber to the Road books, which exquisitely detail some of the best road rides in the Portland region. Back in March, we shared how they leapt from the bookshelf onto the web. Now, publisher River City Bicycles has teamed up with Portland-based TimeStream Software to take that idea one step further.

44 routes from Rubber to the Road are now available as interactive route guides that can be beamed to your iPod. And the best part — according to the founder of TimeStream Software, the Portland-based company that developed the technology — is that anyone can share photos and route information of their favorite ride, and then upload it for others to use.

Here’s the blurb from TimeStream:

“…in addition to riding with music on their iPods, cyclists can have detailed Descriptions, Turn by Turn Directions and corresponding photos for 44 outstanding rides from Multnomah Falls to the Yacolt Burn, from Oregon City to Washougal, Washington.”

Here are a few more shots of what it looks like: 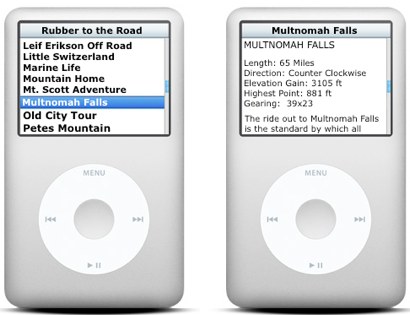 Routes include many favorites local destinations like Council Crest, Multnomah Falls, Oregon City, Larch Mountain (which is closed for the winter) and more.

Mike Westby, the founder of TimeStream Software is a rider himself. He told me via phone this morning that he’s “jazzed” about the crowdsourcing potential of this technology. “We’re hoping this inspires people to create a ‘Notescast’ [so named because it uses iPod’s Notes feature] for their favorite ride, post it to the website, and eventually we’ll build this great resource everyone can use.”

The Rubber to the Road route guide is available free via download from Notescast.com, where anyone can post their favorite rides for others to download (there’s also a step-by-step guide on how to do it). The technology works with iPod Classic, iPod Video, and iPod Nano.

“Steller” is sea lions. Perhaps “Stellar” is the word you were looking for…

Let’s be clear: nothing is “beamed” to your iPod, in particular because this app is for legacy iPods, not for wifi-enabled iPod touches.

I wonder why they went the iPod route? As someone with no intention of getting an iPhone, I’m glad they developed for the iPod platform, but I can’t imagine it’s the route with the most business potential. Maybe it’s easily ported?

Sorry for the non-bike geekery.

Fred, the iPhone and iPod touch don’t need this per se because there’s so many other alternatives available through web-connected sites or dedicated apps (though none that I know of that match this app function for function).

The TimeStream software already existed for classic iPods so it’s not like a new app was developed here. It’s stellar that River City bicycles has added the data to be used. Bravo RCB.

And Dave, yes I was nitpicky, but let’s not let people think that it’s all automated or over some imaginary signal that the classic iPod has no access to. You have to sync your iPod with a computer to get any updates to the routes.

Completely baffled that this isn’t available to an iPhone. My guess is, more than anything, it didn’t get approved by the Apple app store so this was their Plan B.

f5, different technology. Apple doesn’t provide the same Notes functionality on the iPhone or touch that they do on the old iPods. It’s the old Notes format that this app is taking advantage of.

That and over 218 million iPod legacy models have been sold (all models) vs. only 50 million iPhones/iPod touches. (Per Apple – Last quarter reporting) This means the iPod legacy has a larger established distribution base.

So, Plan A is to bring this new concept to Portland area riders and make it as easy as possible to use, as well as create.

Mike Westby
TimeStream Software
See you on “Reach the Beach”

Very interesting, though, if the community is going to focus on collectively mapping, I prefer using a Web-based mapping program so the route could be downloaded in a variety of formats — including GPS which is getting more and more use. I’m a HUGE fan of my Garmin Edge 705 and have let it lead me on all sorts of rides to places I’ve never been.

Understand that ‘notecasting’, and that it’s an app store for legacy ipods, is the essentially the core business model of the software company. I just find it odd that RTTR chose to go the niche route instead of a mobile version of the existing site for ipod Ipod touch/iphone/mobile phone users. I would wager there’s way more than 218 million of those that could use a good web/local app of some kind. Hopefully some day!

Neat app for the legacy model, but am I the only one thinking that this is just another reason for using the ipod while riding, which can be a dangerous distraction by not being able to hear what’s going on around you?

am I the only one thinking that this is just another reason for using the ipod while riding, which can be a dangerous distraction by not being able to hear what’s going on around you?

no you’re not. I had the same concern and asked TimeStream founder about it. Thing is, there is no audio.. it’s meant to act like a guidebook only to keep in your pocket.

Jonathan is correct in that while Notescasts can be developed to contain links to related photos, video, audio and additional text, the RTTB Notescast was developed containing interactive text with links to related photos. There is no audio or video in this Notescast title. Riders use it as an in-depth reference guide on their iPod, and it fits easily in a jersey pocket. No Wi-Fi or Internet access required.

Since this is an entirely new concept and a new way to use an iPod, there are two articles readers may find helpful on the Notescasts.com web site; “What is a Notescast” and “What is iPod Notes.” (Notescasts install to the “Notes” feature already installed on the iPod legacy models.)

Feel free to let me know if you have any questions.

From what I gather, this is going to bridge the gap between those who have a GPS and others who need to print out the ride directions. Everything on your ipod. Very good idea.