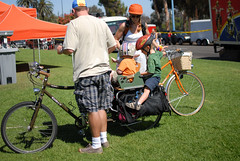 This San Diego family would
fit right in in Portland.
(Photos © J. Maus)

I took a trip down to Southern California to visit family last week (to the north Orange County town of Cypress to be exact). Each time I go, I see my surroundings through a lens that’s colored by the dueling perspectives of growing up there through my high school days and the Transportation Wonk Disease I’ve caught from living in Portland the past five years.

That mix makes for interesting observations.

Making this recent trip even more interesting was that my mom’s house — nestled at the end of a quiet cul-de-sac in a Cypress subdivision — played host to six Sprockettes. The Sprockettes (of which I’ve been a fan for years and now my wife is one too) used our place as a home base for their performance at the San Diego stop of the New Belgium Tour de Fat. 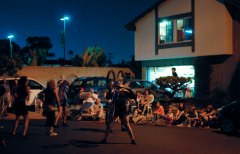 Sprockettes do suburbia: A
performance in front of my
mom’s house in Cypress.

The night before the performance, the ladies treated our family and friends (my stepdad, who got me into biking when I was a kid, had a party in the Sprockettes’ honor) to a run-through out in the cul-de-sac. There they were — Portland’s mini-bike dance team doing their thing while fully engulfed in the suburban embrace. It was a sight to behold.

The crowd loved it, and so did the Sprockettes. Afterwards, they gave my nephews a few lessons in bike tricks. I think my 8-year old niece Bailey wants to be one when she grows up. 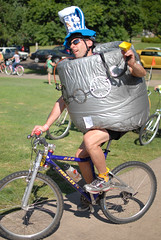 The next day we drove down to San Diego. I wasn’t sure what to expect, but I knew their bike scene had some life because I’d just read a news article about their Critical Mass ride (it has grown to over 1,000 people, and unfortunately, also has the associated controversy that comes with it).

What I found in San Diego were not just signs of a grassroots riding/activism scene, but some of the same indicators of the bike revolution I’ve been reporting about here in Portland.

I saw a young, casually dressed couple riding double on a Dutch city bike (and, notably, without a helmet). I saw a family where the man had an Xtracycle with a very nicely done DIY child seat and his lady had a handmade mixte (it was a Japanese “Ebisu”, from Jitensha Studio in Berkeley). 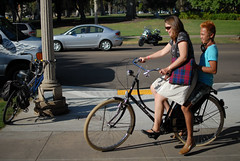 Continuing on my Portland-esque spottings, there was a guy who had removed the seat from his Xtracycle-equipped bike and sat on the snapdeck instead. This gave him a more relaxed seating arrangement. There was also a young boy riding a 20-inch bike pulling a Burley trailer behind.

The Sprockettes’ big performance went over well. The crowd — many of whom have likely never seen a mini-bike dance troupe — were enthusiastic and gave the ladies a loud ovation.

It was the first stop ever for the Tour de Fat in San Diego, and they loudly proclaimed at the end of the day — after announcing they’d raised over $20,000 for two local bike non-profits — that they’ll be back again next year. 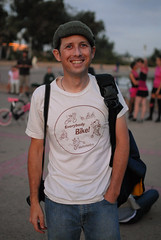 Drew Maccullough and his
excellent t-shirt.

After the Tour de Fat, The Sprockettes rolled over to the big fountain at Balboa Park for a rogue show (where they just turn up a speaker and dance for whoever’s around). Drew Maccullough, a local bike activist, helped set up the show. I noticed him because he had on a BikePortland t-shirt! The dancing got started a bit late, but it turned out to be an epic show. The full moon floated behind the ladies and the crowd illuminated them with bike lights. The bike spirit was strong that night.

Check out these photos (snapped by my amazing photographer and brother Joel): 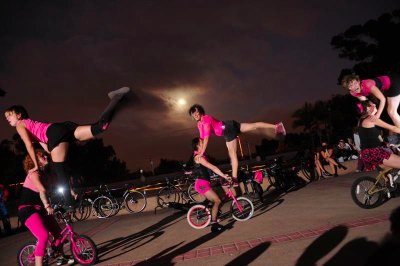 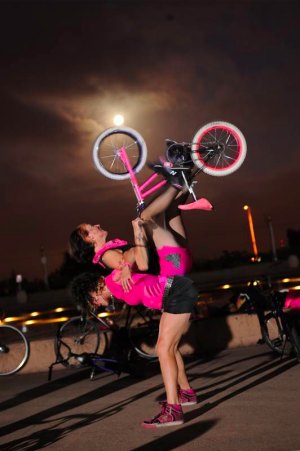 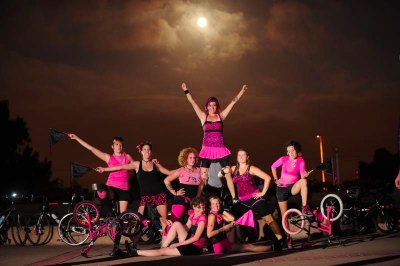 The next day we visited Chinatown in downtown Los Angeles. The first thing I noticed were the ornate crosswalks. 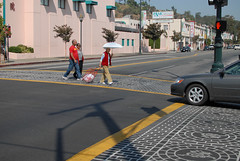 Stretching the limits of thermoplastic, the design alternates between bricks and dragons for a highly visible effect that gives people much more confidence when crossing the street. (I’ve noticed this same type of treatment in Milwaukie, but it’s nowhere near as visible).

After Chinatown we ventured over to the L.A. Farmers Market and The Grove shopping center/complex. The Grove, like many new retail developments in L.A. and Orange County, mimics the promenade streets, outdoor cafes, and storefront facades you’d see in Europe. The Grove even has its own trolley that runs right down the middle of the street.

It was interesting to me that when retail developers want to build a fantasy world where people feel safe and comfortable enough to stroll and shop, they prohibit cars, install a streetcar, and make everything human-scaled. Of course, people loved this environment; they were relaxed and social.

But right outside the confines of this idyllic world, people sit in gridlock, shoppers squeeze onto sidewalks, cars, noise and fear rules the streets, and business owners scoff at human-centric development plans. 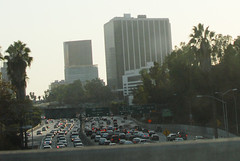 I wonder if retail developments like The Grove discourage people from seeking those same conditions in other places near where they live and work. Are people O.K. with having to drive through a nightmare just to get to a little slice of heaven? One thing I know for sure is that The Grove would be fertile ground to recruit public support for traffic calming, bike boulevards, complete streets, and so on.

Unfortunately, my fantasies at The Grove were quickly brought back to reality when we sat in traffic forever on our drive back to the quiet confines of our subdivision.

Regarding The Grove – isn’t it funny that in the actual cities in the U.S., they push to make everything car-centric on the grounds that doing otherwise would ruin business for shops and boutiques, but then they make a shopping center that mimics a city designed on more livable principles. Aren’t we doing things a little backwards here? Put the livable city in the city, how about?

The Grove is very similar to our own Bridgeport Village in concept. I have seen these places all over the country in the last few years. My big problem with them is that they typically fail to integrate residential units into the plan so after hours these places are wastelands with no people.

Mixed use is where it’s at people. Retail below, apartments above. That is how you teach people that it is okay to live without a car.

The Grove, and similar Spectrum down in Irvine and 3rd St Promenade in Santa Monica, are a major reason I left LA for Portland. Exactly to your point – you drive and drive and drive to get to a place where you wait in line to put your name on an hour long wait list to sit down to a dinner to wait for the server to bother to notice you 20 minutes later. Insanity!

I’ve seen The Grove, and it is very well done in it’s imitation of a pedestrian-friendly town (looks like they might have had some ex-Disney employees working on it). It’s also adjacent to much older attraction, the Farmer’s Market, which is an authentic 1920s experience.

The 3rd St. Promenade in Santa Monica (not to be confused with the Santa Monica Place mall at the south end of it) is different. It actually a city street, part of the Santa Monica grid, and 3 blocks from the Pacific Ocean. It was converted to pedestrian only in the 1970s. It struggled for years. Then, about 10 years ago, there was a redo, that planned to add a car lane through the middle. At the same time, some adjacent old buildings, and some new, added housing on top of retail, and a movie theater was added. By the time the street redo was ready, shops had moved in, and it was such a vibrant place that they never needed to open the auto lane. It’s still there, notable by it’s curbs, but it’s all pedestrian-only (and bikes too, although it’s crowded with walkers). It spans about four blocks, and masses of pedestrians cross at each signalized crossing of the intervening streets. It’s probably hipper than many nearby malls. There are city parking garages on adjacent blocks, added in the 1970s effort, but they don’t really detract, or disrupt the grid of streets. It is, I think, a success story for revitalizing downtowns.

You have, so accurately, highlighted another sharp contrast of California life! Fitting, though, in a state which contains America’s highest and lowest elevations. The Golden State is definitely a place filled with extremes! Sounds like you enjoyed your trip.

Mike M., Pasadena has at last built an open pedestrian mall with housing on the upper stories in Paseo Colorado, which is still way too much of a mall atmosphere for me but is a step forward. There’s been a lot more of this happening lately, especially around Metro stations (including in Pasadena; eg Delmar station).

It’s still mostly corporate in style and heavily controlled (private cops), but I suspect that future developments may be more community-oriented.

So great to read this story. There are so many points in your story that could be commented on, but I’ll just make one.

As far as I’m concerned this urban and suburban planning idea has been the death-knell of connectivity and poses real and present disincentives for people to walk or ride bikes. Not being a planner myself, I have no idea when these styles of development began, but they shouldn’t continue.

I was recently in Bellevue to visit friends and discovered that the route to their home is a maze of cul-de-sacs, one after another, all off a main artery that can never be expected to carry all the cars that attempt to drive in that city. And, there are NO SIDEWALKS, no shoulder for a bike, nothing that invites people to come outside and linger together in community. You have to wait to be in community until you reach the end of the road, the cul-de-sac. Surprisingly, much of Bellevue and many other cities are designed this one. One commenter made note of Bridgeport. Personally, I think that fits in the category of a cul-de-sac and in no way compares to any of the European shopping/walking districts that I’ve seen.

I think we need to keep pushing for integration of all modes in as many places as possible, so that it is manageable to walk a city, simple to bike it, and invite . . . let’s invite people to get out of their cars. We make them do that by making it so damned cool to walk or bike that they won’t want to be inside a car.

Thanks for the images, go Sprockets.