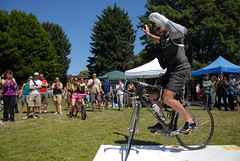 Mike Cobb, with his arm in a sling,
during a track stand contest at the
Multnomah County Bike Fair in June.
(Photo © J. Maus)

Portlander Mike Cobb wants to represent Portland at this year’s Cycle Messenger World Championships in Tokyo and he’s looking for a bit of help to get there.

Cobb — who works for local bike-powered cargo delivery company B-line PDX — is an expert pedaler, but he’s also one of the best at not going anywhere at all. Cobb is a two-time track stand world champion and he hopes to defend his titles in Japan. (He’s also won four bronze medals — one in track stand, one in riding in backwards circles, and two in the cargo bike races).

A track stand is when you stay balanced on your bicycle without moving or putting your foot down. In competition, the last man (or woman) to put a foot down is the winner. They’re a time-honored tradition and just one of many disciplines that will test the limits of messenger talent at the event. 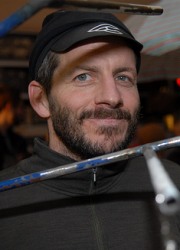 Mike at BikeCraft (he makes cool wind
chimes out of old bike parts.)

Cobb says since 2004 he hasn’t found anyone who can track stand longer than him (he credits stopping to practice at all red lights and 10 years of yoga as his magic recipe), but he’d rather be known for his cargo bike racing prowess. In fact, Cobb was all set for his Tokyo trip with full sponsorship from a cargo bike company, but when organizers pulled the cargo bike event at the last minute (turns out there’s not much of a cargo bike culture in Tokyo), Cobb was left holding the bag. No event. No sponsor.

For Cobb, the event is a chance to not only display his skills and bring home some hardware, it’s also an opportunity to connect with the world-wide messenger community as a representative of Portland and Oregon.

I can vouch for Cobb’s skills, both on the bike and off. He was a vendor at our BikeCraft event last winter where he sold a wonderful collection of handmade wind chimes made from old bike parts. I watched him track stand at the Portland Mercury’s booth at the Multnomah County Bike Fair back in June. With his arm in a sling due to an injury, Cobb mounted a bike and remained still forever, even as vicious bystanders hurled water balloons at him at point blank range.

If you are interested in sponsoring Mike’s trip (he’s got varying levels of support available), or want more information, check out his “Mission Tokyo” website.

Portland’s own Tim Mason will be in Japan, he is the worlds greatest backwards circle rider. He did 70 or so to win when the worlds were in Seattle, but his record is in the hundreds. I’m sure he’d take some sponsorship too if there is a company making backward circle bikes…

Ryan Hashagen down at Portland Pedalworks has won the Cargo Messsenger World Championship in ’03 Seattle and ’04 Edmonton. He hitchhiked across Canada to make it to ’05 in NY and placed fourth that year. If anyone wants to sponsor, hopefully 2010 CMWC Guatemala City will host a cargo race. The question will now whether he races a pedicab or an icycle Tricyle.

Anyone with an older Bianchi? I have cash. Celeste color is preferred. No cracks, dents, fractures, etc will be accepted. Contact me @ bicycletothesun @ gmail dot com.

So much to say here….

Yup – Mason, Ryan, Sharky – they’re all on my hero list. They’ve all kicked my ass at various times…I just love cargo bike delivery and global messenger get-togethers. I happen to be able to win a couple of the esoteric events and also happen to be a bit cash-poor, so I thought – hey – I’ll proudly wear logos from Portland if it helps get me to Tokyo. I’d like everyone to go with me – especially the crusty old died-in-the-wool Portland messengers. The promotion is a bit over the top – but I think that’s how you engage in the sponsorship game. I would love to see more bikeportland coverage of messengers, especially those of you who’ve been around WAY longer than me…I’ll bring back some sake for y’all.

I remember Mason beating everyone by many multitudes at backward circles in Edmonton on a stage with a cup in hand. I remember the many hours he spent practicing outside the old ENA satellite office to hone his technique.