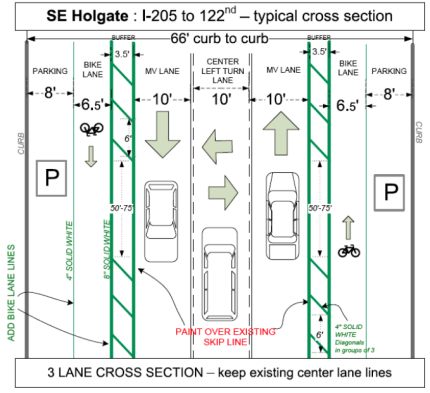 The City of Portland Bureau of Transportation wants to put a section of SE Holgate Street on a long overdue lane diet. From SE 92nd to 122nd, PBOT will reduce the current five motor vehicle lanes down to three, making room for buffered bike lanes in each direction.

Holgate currently has five motor vehicle
lanes in this stretch, but PBOT says it
only needs three.

The buffered (also called “enhanced”) bike lanes would be similar in design to the ones slated to be installed on SW Stark and Oak next month. On Holgate, City plans call for a 6.5-foot bike lane (adjacent to on-street parking) and then an additional 3.5-foot buffer zone. Motor vehicles would have one lane of travel in each direction along with a center turn lane (on-street parking would remain intact).

PBOT did an analysis on this stretch of Holgate and found that current traffic volume does not warrant five lanes. 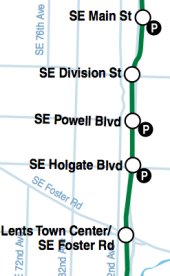 The new bike lanes will help
access to new MAX
station at Holgate.

According to PBOT, this stretch of Holgate (from 92nd to 122nd) was originally designed as a five-lane roadway in order to accommodate freeway access at I-205. That is no longer an option, but the road has retained its five-lane configuration for years. PBOT now intends to put that space to more efficient use thanks to grant funding from TriMet.

PBOT planner Denver Igarta says the project will cost roughly $30,000. TriMet put up the funds as part of an effort to more effectively connect people to transit and jobs. Their new I-205 Light Rail “Green” line opens in mid-September and it will have a transit station at Holgate. These improvements to Holgate will give people on bikes a much easier and pleasant access to that station.

Also as part of this project, PBOT will also improve the I-205 bike path where it crosses Holgate. Because the crossing is “difficult to see due to the curve of the roadway”, they want to enhance it with a “ladder bar crosswalk,” additional signing, and perhaps even a refuge island someday down the road.

This project should be welcome news for folks in outer southeast who have long complained that their area is bikeway deficient. The work is scheduled for completion this August.

This is great news! I would love to see similar changes to other roads east of 92nd. Maybe Stark east of 106th? I’m dreaming, I know.

Awesome! One question – how does the city intend to aid cyclists between 92nd and 82nd? Is the designated route to turn, and move to another cross street? That segment of Holgate is preoblematic due to the traffic to and from Wal-Mart. Will the city place additional signage near 92nd to help cyclists in that area?

Good idea. I agree that 5 lanes on Holgate has long been overkill; there just isn’t that much traffic. I’m curious, though, just how much bike traffic this gets/will get. Still, a good idea.

And Jordan (#2), Stark is a MUCH higher traffic volume street. I commute to Gresham daily and always take the Burnside bike lane. Much less traffic, slower speeds, and less opportunity to get right hooked by someone pulling into a lot, which is a big problem on Stark. Still, it’s a good dream 🙂

This is just a super project. It was brought to us earlier this year by Holgate neighbors, and I was really impressed how quickly Portland Bureau of Transportation staff were able to move it forward.

Matt – I think the theory is that cyclists will take the revamped 205 path to any points along 92nd. From what I have seen, it is clear that they intend for us to use it as our principle north/south corridor.

I would like to see bike facilities continued further west on Holgate. Like Matt P. said, the connection between 92nd and 82nd is less than ideal. Past 82nd Holagte is a pretty nice ride, and now west of 52nd it’s a dream. A nice contiguous path between towards downtown would be great.

RE: further west on Holgate. Here’s a snip from the project description:

“The segment between 82nd and 92nd is a two lane roadway with restricted parking on both sides. With minimal parking removal, this section could also be converted to a 3 lane cross-section to allow for pedestrian islands to be implemented.”

The mantra i’ve been hearing at PBOT is to “not let perfect be the enemy of the good”… meaning that they are doing what they can do ASAP with budgets. The idea is to do what they can now, and set streets up for more significant improvements down the road when larger pots of money open up.

This is much needed. Thanks TriMet, PBOT & Lents Neighborhood!

Maybe someday they’ll extend it all the way to 136th (which also needs bike infrastructure).

At least the bike lane is not relegated between the curb and parking strip, like in some proposals elsewhere in the City. That’s not entirely unlike what the US did to Native Americans via the reservation system in the 19th century – appeasement with numerous hidden increased risks.

That’s a new one, Schrauf (#10). I haven’t heard cycle tracks compared to the genocide and disenfranchisement of Native Americans before…

Congratulations, I guess: it’s a nice way for you to try and work your way around Godwin’s Law. Keep it up.

Serviceburo (#6) – I’m not worried about the north-south, I’m concerned about east-west traffic. Jonathan addressed it in post #8.

Good to see PBOT rolling out a project in outer SE for a change. I’d love to see some stuff north of Burnside between 122nd and 162nd as well. (Granted, it gets a lot more challenging out there)

I want to see this happening to any big hip street like Hawthorne and Belmont.

mmann #4 I’m with you on Burnside, I live between Stark and Burnside and use Burnside going to work.

I bike lane should never be within 3 feet of a parking lane, and a buffer would be a good idea as #10 says. Though, I’d rather bike between parked cars and a curb than parked cars and moving traffic. I don’t see how someone would be against that.

This sounds pretty cool. Hopefully with the diagonal striping between the bike and other lanes drivers will be a little more aware that they are crossing bike traffic when they park, and therefore actually look.

I like it- simple, effective, connected to other bike ways…

I am astonished to see that the city continues to put through traffic lanes on the inside of right turn lanes.

As a motorist that lives on 122nd & Holgate this is rediculous. The fact that our tax money had to pay for it is even worse. I ride the bus and see it daily, the bike lanes have VERY LITTLE traffic.
Now:
1) can’t pass a slow moving vehicle when driving
2) the bus must fight for position because nobody wants to be stuck behind them
3) anyone trying to turn left at a light on holgate is now SOL because of long lines at stop lights. Traffic isn’t going to stop to let a bunch of people turn left.
4) cyclists are still using the sidewalks and riding on the wrong side of the road.

If you don’t live out there and you don’t see it then your opinion doesn’t mean much.
Why would I ride my bike when I could catch the 17 which runs every 15 minutes.

This was a horrible idea which makes Holgate a pain for the other 99% of the people who use the street (cyclists being that other 1%).

FYI – taking lanes away won’t encourage us to ride our bikes, just change the way we vote.