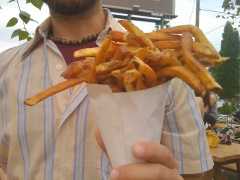 Approximately 45 people on bikes gathered at Colonel Summers park at 7:00pm Tuesday for a Pedalpalooza event called the “Remedial Ride 2.” Ride organizer Ben’s description on the Shift calendar caught my attention with promises of a short ride distance and multiple food stops. It sounded right up my alley so I coasted on over after work and took a seat in the grass while the tide of bikers rolled in.

Colonel Summers was the starting point for two other Pedalpalooza events at the same, time but each group found its attendees and off our group rolled for the less-than-grueling six tenths of a mile to the first top. At Belgian fry cart, Potato Champion (12th and Hawthorne), we all stopped for a significant quantity of frites adorned with assorted sauces. 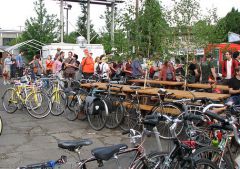 The scene at the food carts
on 12th/Hawthorne.
(Photo by dealbreaker/Flickr)

I was pleased to find poutine on the menu (having recently relocated from Québec) in classic, vegetarian, and vegan versions, and quickly scrounged up the 5 bucks for a boite du cheese curd and gravy covered goodness. I can assure my esteemed colleague at montrealpoutine.com that poutine exists outside of La Belle Provence — and TABARNAC, it’s tasty. I had the veggie version, which was heavy on the pepper. I’ll be doing more thorough research in days to come.

It was beautiful to see a parking lot at a busy intersection overtaken by people chatting and enjoying the weather, one another’s company, and a bit of food. Passing auto occupants were clearly curious about this display of neighborliness and human scale living. The simple idea of setting up a time, location and destination via conduits like Shift seems like a good tool for improving the quality of life for those that seek it out.

Done ruminating over my squeaky curds and general good fortune, it was time to mount up and work off the french fries by parading through Ladd’s to the cute little trailer called /Sip/ outside the People’s Coop at SE 21st and Tibbetts, over a mile away. (Good thing I carbed up.) 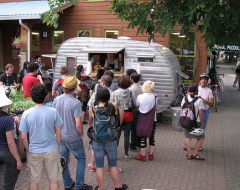 In line for smoothies at Sip.
(Photo: Jonathan Reed)

Sip made special arrangements to be open for this event and ride participants wasted no time in eagerly flooding them with a list of vegan shake orders for the two person staff to concoct. The lengthy wait for a shake made by hand was made well worth it by the tasty final product and the opportunity for people to chat further and soak up the remaining magic-hour lighting, happily surrounded by bicycles.

The threatened altercation with a Remedial rider by a man I know as “the-guy who-marches-down-my street-hurling-obscenities-at-squirrels” briefly disrupted the shake-induced bliss, but his anger was no match for a crowd of well fed and generally serene bicyclists. Calm prevailed and participants of the 2 hour long, mile and a half quest eventually went their separate ways, reassured that “bonking” on the ride home was unlikely.

I was volunteering at People’s last night and came out at the tail end of the “altercation.” (I also recognized the guy – he pushes shopping carts down my street while talking to himself and always has his hood up.) I was told the homeless guy was throwing chairs and umbrellas around, but what started it? When I came outside, he was shouting at everyone, seated and lacing up his boots (?), and then he left. Apparently one of the riders also had a knife that he had pulled out behind his back in case he needed protection or something. It’s good that it didn’t ruin the ride – it was a bummer to see strife between bicyclists and the homeless population (I have no idea what that guy’s story is, but it’s clear he needs some sort of help) and I’m just wondering if it was a preventable altercation or what.

i’m not sure where you got all that information “NB”.
but i was there during the whole thing.
it lasted about a minute.
the guy just randomly started yelling about someone named “steve”.
no one knew who he was talking about.
he started to throw/shove some of the chairs.
he initiated the situation by yelling that throwing things at emily, felix, hannah, and others.

he eventually left, though he was still yelling as he walked down the street.
Brian (of Sip) says he’s a regular down there… frantically yelling at the corner about the “coming blood bath, etc…”
i felt like the situation was de-escalated as quickly and efficiently as possible.

please don’t turn the comments section into focusing on this one small part of the ride.
everyone had a blast and i’m super proud of how it is turning out every year.

in fact, i’m touched that there it was blogged about here.

lastly: here are some more pics from the ride

The gentleman overheard a fraction of a conversation, where someone said that there was a lot of homeless people in downtown portland. Taken out of context, he took offense, decided that he was going to freak out, and hence the chair throwing commenced.

I don’t recall a knife being pulled out, but the way the guy was acting, it would have been warranted.

btw, besides that, it was a great ride. I love potato champion, and that was my first sip milkshake. The cookies and cream was delicious!

“Ben,” all I asked was what happened. I was inside People’s sweeping when one of the staff said that someone was throwing chairs, and I went outside and saw the guy leaving. The knife thing was based on what another employee said about a rider who apologized to us (for reasons unclear to me) after it was over, but it seems like maybe it was irrelevant. I am assuming that you are the dude who organized the ride; I am not trying to co-opt the discussion forum or anything like that. I am not trying to blame the riders, I simply was asking what started it. Chuck #3 more or less answered my question, so if you hadn’t gotten defensive, I wouldn’t even be writing this right now and the discussion of the “altercation” would already be over! Sheesh.

BTW, props to Sip for staying open late for you guys. I think they have been a great addition to People’s.

He did mention the frequent BP commenter “steve” so I must assume he was riled up about some random comment about the CRC.
(wink)

NB – “all i asked is what happened”.
no you didn’t.
you listed off all of thing things you HEARD and the things you ASSUMED (in addition to asking).
thats why i was frustrated with your first comment.

we both know how things go in this town, especially with the help of the internet.
the rumor mill gets moving fast.
i don’t want people to be hesitant to come on this ride next year due to unfounded rumors.
we always have kids on this ride. i don’t want parents to think it may be unsafe.

so yes, i was defensive… and i think for good reason.
feel free to email me directly via the pedalpalooza listing for my ride.

Changing the subject, I ‘discovered’ Potato Champion and the rest of the food court at SE 12th and Hawthorne at about 1 AM on my way home from WNBR on Saturday. The place was jumpin’, and they were giving free food to anyone who ordered their food in the buff! Great people, great food, giant portions!

Last post, I promise. (For the record, Ben, there is no email address on your Pedalpalooza listing (unless you were trying to direct me to your myspace?).) Look, my original question was addressed to the BikePortland guy who wrote the article (apparently interns don’t get email addresses?). All I wanted was a little explanation of what set things off, out of curiosity. (Despite what the general population might think, and yes, despite obvious mental health problems, the homeless still generally don’t attack people, let alone groups of people.) I understand that this ride is your baby, but what – you’re worried that word is going to get out that homeless people hate french fries dipped in milkshakes? (They might save their pennies and buy computers so they can find out when the ride is next year and then crash it!) I don’t know what “assumptions” you’re referring to (that the guy in question was homeless?), but if this is an issue of the unreliability of witnesses, consider that that applies to you as well. (Seriously, “random homeless person attacks bicyclists for eating french fries and milkshakes at the same time” does not seem very credible.) Anyway, take a breath. Again, Chuck #4 has already explained what happened satisfactorily. (And I was also told that the bike rider, knife or no, did a great job of defusing the situation non-violently. Everything is fine! This was never a big deal!) Case closed, end of story.

On another note, does Sip usually serve milkshakes or was it special for the ride? (I thought they just did juices and smoothies.)

I’m over this altercation/assumption topic. Moving on to the subject at hand…
This ride was super fun, just as it was last year. It’s great for those of us who may be a little intimidated by Pedalpalooza. Sip and Potato Champion are amazing for being patient and happy to serve all of us! Thanks Ben!

i like short rides with lots of delicious vegan food! sip rules for being open for us!

email me there and i’ll address your last post.

thanks ben, the ride was great. the homeless dude was an icebreaker and sip does serve milkshakes (they are vegan and delicious).
thanks potato champion for opening early and sip for opening on their day off.
hey ben, are those sidi shoes you’re riding with mmmMmm