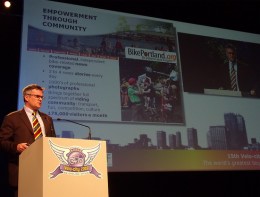 With Pedalpalooza just a week away, it’s fitting to do a story about how Portland’s legendary bike fun created quite a stir at an international bike conference held last month.

Portland Mayor Sam Adams, along with his Chief of Staff Tom Miller and Bureau of Transportation traffic safety specialist Greg Raisman recently returned from the Velo-City conference in Brussels, Belgium. Velo-City brings together the top bike planners and experts from around the globe. With representatives from nearly 50 countries and numerous, high-level politicians from Europe in attendance, it is the premier bike conference in the world.

Conference organizers paid for Adams’ trip and gave him a prime spot on the schedule. During the opening plenary, Adams shared the stage with the Deputy Mayor of Amsterdam, Vice President of the EU, a former Prime Minister of France and representatives of the United Nations.

According to Raisman, who paid his own way and did a study trip of several other cities after the conference, Adams’ presentation, “put Portland squarely on the world stage.” 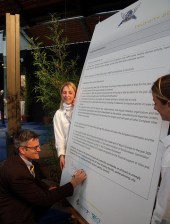 In Brussels last month, Adams
became the first Mayor from
North America to sign the
Charter of Brussels.

“To listen to the commentary in the hallways and in conversation at the conference afterwards about how the ‘American bicycle city’ had the best presentation of the day was a bit overwhelming,” said an excited Raisman reflecting on the conference.

And it’s interesting to note that the excitement wasn’t about infrastructure projects or governmental policies. Raisman said, “the most interest was in our bike fun.”

You might be wondering, what exactly is bike fun? It’s not a formal term by any stretch, but it’s been used for years on the streets of Portland, especially by folks involved with Shift. The epitome of bike fun is probably Pedalpalooza, their annual event that lists nearly 200 events in just over two weeks.

In an update from Brussels after the conference, Raisman wrote that the chatter in the hallways following Adams’ presentation was all about bike fun:

“You have how many bike events?” “You do what on a bicycle?” “You do what WITH your bicycles?” From the UN to the City of Copenhagen, people were exploring the Shift webpage and sending emails to colleagues saying they need to bring bike fun to their city or around the world.”

In addition to spreading the Portland bike spirit to leaders and creators of the world’s most bike-friendly cities, Adams also became the first (and so far, only) North American Mayor to sign the Charter of Brussels.

Signers of the Charter commit to several bike-related initiatives. Among them is one to “set a target of at least 15% for the share of cycling in the modal split of trips for the year 2020.”

That goal shouldn’t be too tough to reach, especially with bike fun in our corner.

— Watch a short video below of Mayor Adams and League of American Bicyclists Executive Director Andy Clarke at the conference:

good stuff. what other cities or governments signed the charter?

It won’t be hard to hit 15% of commuting to work trips maybe by 2020, but I think it might be a bit tougher to hit 15% of all trips all the time. I think it can be pulled off though. If this summer is any indication of where we’re headed, if we can get winter of 2020 to be like summer 2009 (in terms of ridership), we’ll be set.

I’m intrigued by one of the bullet points I saw in a slide in Greg’s photos. It says that traffic fatalities in Portland are declining 6 times faster than the USA and 3 times faster than Oregon. That’s the first I’ve seen of that statistic. Do you know how it was calculated?

There’s a lot more to share from the trip! It was amazing. One thing is that I’m working on a Europe Photo Library that is almost done and can be seen here: http://www.flickr.com/photos/gregraisman/collections/72157619060042143/

The first result of the trip is that the manager and principal engineer for the London Cycle Network, Steve Cardno, will be in Portland next week. He’s staying in my house for 5 nights. Why is he coming so quickly? To check out Pedalpalooza!

Steve will also give a talk at noon at PSU on Monday, June 15. The London Cycle Network is an effort to build a 900 Km cycle network in London and is funded with 100 million Pound. One of the largest bicycle projects currently underway in the world.

After he leaves, another London Cycle Network staffer, Brian Deegan, will be here for Sunday Parkways and more Pedalpalooza. He won’t be presenting, but will have a few business meetings while he’s here to learn about Portland’s “soft programming” (SmartTrips, Sunday Parkways, Share the Road Safety Class, etc).

There’s more to come. I’m sure we’ll be talking about other exciting things as new ideas and partnerships get formalized.

Jessica: You can see the numbers here.

I think it’s weird that dude had to pay his own way to go on a work trip. That’s just wrong.
But yea, Bike Fun !!!

I’m really looking forward to taking in the local bike cultures of Amsterdam and Brussels (and the nearby city of Leuven) next month!

ggw, lucky you! That’s a place I want to get to, and especially try out the routes between cities, through the more rural areas.

Anyway, that was a pretty impressive crowd in the video. Glad to hear Portland knocked their socks off.

“Conference organizers paid for Adams’ trip and gave him a prime spot on the schedule.”

Mark 9 – I believe Dan is refering to “Raisman, who paid his own way”.

Will Steve Cardno’s talk at PSU on the 15th be on the Pedalpalooza calendar?

That’s a good idea, Shawn. I’ll get it on the calendar this Monday when I’m back in the office.

Gee, maybe Sam Adams will inspire HIMSELF to start bike commuting to work more than once every 100 days. Of course, that would be more than lip service, it would be actual effort, so lets not expect him to do it. Too much work.

I like how the city is trying to take credit for the ‘bike fun movement’, which is an independent movement that continues to grow despite the city’s best efforts in the past to squash it.

Harassment and ticketing of Critical Mass riders, ZooBombers, Midnight Mystery and Pedalpalooza participants by the Portland Police still happens to this day.

In the meantime, the city continues to offer little more to cyclists than poorly designed bike ‘facilities’ designed to segregate cyclists into unsafe bike lanes and cycle tracks – essentially bike ghettos – instead of recognizing and acknowledging that cyclists have a right to the full road, and installing on-street facilities like sharrows, which send a much clearer message to motorists that bikes belong on the road.

PDOT should stick to building new bike parking corrals, at least they finally get that good bike parking is both critical and essential, after about 20 years of stubborn denial.

BURR (#14) – Sharrows aren’t in the MUTCD yet, so they will never be widespread until that happens.

As for cyclists having a right to the full road – that issue is much more a STATE problem than a local one.

I think it’s pretty cool that Greg R paid his own way there. That leaves more money in the budget for other things. I could wish that more public figures would pay for their own travel instead of having the taxpayers pay it.

Very interesting article, JM, but I agree with BURR that the City of Portland really hasn’t had all THAT much to do with the Bike Fun movement– that’s pure grassroots, right there, and needs to be acknowledged as such by our civic leaders instead of taking all the credit.

Thanks for the stats, Greg. That FTP path didn’t work for me but this one did: ftp://ftp.trans.ci.portland.or.us/Raisman/Fatal%20Trends/. Not sure if others would have the same experience.

ummm, sorry to rain on all the naysayers’ parade, but ‘bike fun movement folks’ and ‘city employees’ are NOT mutually exclusive. many many many of portland’s bike fun movers and shakers have at one time or another been employed by the evil empire (aka, the city’s dot/bot). promoting bike fun may not always be in their official job descriptions, but it’s not like they show up at the office at 9 am and say, “okay, time to turn off the bike fun switch and start making life hell for all the bikers out there.” similarly, when those same city employees – on their own time – wake up at 5am to brew coffee and hand it out on bridges, or organize bike moves, or lead bike rides and tours, it’s not as though they all of a sudden stop being city employees. i think it’s a testament to everyone involved in making biking better in portland that there’s so much overlap between our ‘bike fun’ folks and our local government employees.

I’ve commuted on my bike for over 20 years and transportation infrastructure is very important. But so is fun, and it’s very cool that we are admired around the world – and starting to benefit from that reputation – for playing! It’s a tough job, but someone has to do it …

@ Matt #15 – Cycle tracks aren’t in the MUTCD either, but that doesn’t seem to be stopping PDOT.

@ david #18 – it’s more like these folks developed their resume doing bike fun events independently of and outside PDOT, and then got hired / coopted by PDOT, rather than the other way ’round.

@ BURR #21 – yup, ’cause nothings screams “qualified” to an HR person quite like that line in your resume touting your bike fun experience…

whatever, the headline is still: City rides coat tails of independent bike fun movement, then tries to take all the credit.