Last Thursday set to go carfree for the season

For several months last summer and fall, throngs of visitors to the popular Last Thursday art walk on NE Alberta St were able to walk, bike, skate, roll wheelchairs, push strollers, or stop to browse and socialize in the street without interference or danger from passing cars. 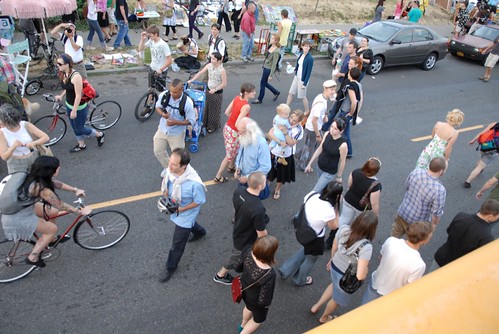 The street filled up quickly but still had plenty of room for nonmotorized passage in the first official carfree Last Thursday in July, 2008. (Photo © J. Maus)

A week from today Last Thursday will go carfree again. On May 28th from 6pm to 10pm, NE Alberta will be closed to motorized traffic from NE 15th to NE 30th. TriMet buses will be diverted to other streets.

Volunteers are needed to help set up and take down barricades, as well as to direct traffic and provide information to vendors and attendees at either end of the closure as well as at intersections between 12th and 31st. All volunteers will be given a t-shirt to wear during their shift. Four volunteers are being sought for each station.

If you’re interested, you can reach the volunteer coordinator, Teri, at: info at albertalt dot com.

Event organizers are also looking at options for setting up temporary bike parking corrals so that eventgoers can park their steeds and enjoy the street on foot. 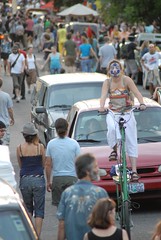 The progression towards carfree Last Thursdays has been long and colorful. Sidewalk congestion was becoming overwhelming at the event, but after meetings among stakeholders and at City Hall in 2007 and 2008 to work out a plan progress stalled. Local residents and business leaders, spearheaded by local developer Magnus Johanssen, took it upon themselves to create three carfree blocks last June.

After this, the city agreed to experiment with a “soft closure” in July, 2008, which allowed people to drive their cars amongst the crowds escorted by clowns on tallbikes. (Check out our photos from the evening.) August and September Last Thursdays were also carfree, with official “hard closures” — that means physical barricades put up at intersections to prevent anyone from driving down the street.

This year there will be six carfree Last Thursdays, from May through October.

Nonprofit group Last Thursday on Alberta formed last year to run the event, including orchestrating the street closures. According to board member Kriss Parnell, the event relies heavily on volunteers and donations to keep the event running smoothly each month. The costs associated with the hard street closures — primarily insurance, and the one-time price of materials for handmade barricades — are significant, and the group is seeking donations. Checks made out to Last Thursday on Alberta can be sent to 5014 NE 24th Ave, Portland, OR, 97211.

That’s pretty cool. Even before it was car-free it was a pain to drive on Alberta during Last Thursday, so I’m guessing the neighbors aren’t going to mind the once-a-month closure. It’ll definitely give it more of a block party kind of vibe.

This is swell, except they’re closing Alberta at my street, each and every time. So I get an endless stream of cars (driving fast, po’ed that they have to go around), a bunch of BMWs full of Beaverton people blocking my driveway, followed by drunk kids late at night leaving their beer bottles on my lawn. Awesome. Please come enjoy, but have some respect.

Join us on Last Thursday for the Bathrobe Parade with MARCH FOURTH! Starting at 7pm at the Alberta Co-op.

I’ll be recruiting volunteers this next week to hand out fliers for Common Ground Wellness Center during the parade. First 10 volunteers will receive a free hour to soak and sauna.

Walk, bike, wear a bathrobe, towel… see you there!

Jeff, those are legit gripes for sure. You should lean on Last Thursday organizers to do a lot of public outreach regarding respecting the neighbors (for the issue of litter, parking pedestrian noise). Both you and the organizers should be leaning on the Po Po to properly enforce public safety and traffic laws with regards to agro drivers.

how much to local alberta business’ chip in? They gain the most from this event and should be expected to help make it possible.

“bunch of BMWs full of Beaverton people blocking my driveway”

seriously jeff…you actually know where these people live? or do you just like blaming yoru problems on a group of people living in a place you don’t agree with…? are their always BMW’s in front of your driveway? each and every single last Thursday?

Who is this event for?

No bahueh, I just like hyperbole. But seriously, there was a BMW blocking my driveway last Saturday (art hop). When I travel to other people’s neighborhoods, I’m respectful, I’d hope for the same.

John, I wasn’t able to attend, but a friend expressed these concerns at the last neighborhood meeting. I’m hopeful that it will work out. I love living here and Last Thursdays are great for Alberta.

It seems that this site has been drawing more and more whining complainers. It’s really a shame, since the posts are so informational. I guess I just need to avoid the comments altogether, which is a shame because there are still some good comments strewn about in the wasteland of boohoos.

Since when does anyone need insurance to walk on city property?

Taking cars out of the equation for the Last Thursday Art Walk is a really good idea and one that I think will reduce some of the stress from the event in the neighborhood.

As someone who has lived right off of Alberta Street for the past 15 years, I can attest to the ambivilance many of us feel about the event. A few years ago the 2am (on a school night!) drumming circles were getting a little out of hand. I try to take the good with the bad. Others, my wife included, have no patience for disrespectful partiers.

I portion of the problems/stress definately comes from drivers who lose patience with waiting for the endless stream of pedestrians to make an opening. I associate Last Thursday with angry yelling, horns and squeeling tires.

Taking the cars out of the equation makes for a much more peaceful vibe! Hurray for progress.

which streets will the bus use?

bahueh–as somebody raised in Beaverton, I think it is totally legitimate to blame obnoxious behavior on beavertonites. (I’ve moved to downtown and live car-free, so I’m no longer included in that group… not that I’ve ever had a car)

I second the question about the need for insurance. Are people so wrapped up in the way things are that they view any change as a potential hazard? Seriously, what is the increased risk by keeping cars off a few blocks?

Jim, the bus has been rerouted to Killingsworth in the past to bypass street events on Alberta.

About the insurance: Every event in a public right of way, whether a closed street for a party or a race, or Waterfront Park, needs liability insurance, though the city is able to waive this requirement if it chooses.

If the party were in your house, homeowner’s insurance would cover your liability. If something happens at a street party, someone can sue you if you’re insured — and if you aren’t they’ll sue the city, so the city obviously wants to avoid that.

At least, that’s as close as I understand it. If anyone here has better insights, it would be good to hear from an expert…

The bureaucracy involved in street closure permits is pretty massive altogether, in large part because of the insurance issue. It’s one reason they don’t happen more often.