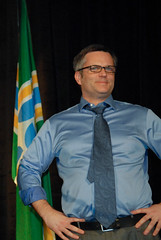 He’ll need to be Super-Sam
to get all this stuff done.
(Photo © J. Maus)

Mayor Sam Adams has released his list of goals for his first 100 days in office.

From the section on transportation, here are some things that pertain to bicycling:

Develop a four-year strategic vision for Portland’s transportation investments and infrastructure
1. Appoint a Transportation Cabinet
2. Initiate development of a strategic transportation investment plan as a component of the Portland Plan
3. Advocate for federal stimulus package
4. Conduct a snow and ice storm readiness assessment for the city and region; develop a plan of action for future efforts and investment
5. Provide leadership and support to secure passage of a transportation funding package at the State Legislature

It will be interesting to see who he’ll put on that Transportation Cabinet. I’m sure it will include a strong voice for non-motorized modes.

Enhance the safety and accessibility of bicycling for everyone
1. Announce the release of an updated Bicycle Master Plan for the city
2. Unveil the City’s first Cycle Track in a high-visibility, high-use location to promote safety and increase bicycle use
3. Identify 15 miles of Bicycle Boulevards for implementation in 2009
4. Complete the next link in the Bike Boulevard network on N Wabash, connecting N Willamette Blvd to the bike path along the Columbia River
5. Deliver on-street bike parking corrals in four or more high-demand locations

Last updated in 1995, the update to the Bike Master Plan was supposed to be done in 2005. It’s a bit late, but from what I’ve heard, it will be well worth the wait. It will include a broad look at bicycling in the city and should become an important, guiding document for Portland’s quest to be a world-class bike-friendly city.

We reported previously about the cycletrack promise. Now we’ll just have to wait to see where they put it.

15 miles of bike boulevards will be easy to identify. The hard part will be actually making them real bike boulevards. Does “implementation” mean construction? Interesting to note that not one single mile of new bike boulevard was “implemented” during Adams’ tenure as Transportation Commissioner.

As for the North Portland bike boulevard piece (#4). City bike coordinator Roger Geller and his right hand man, planner Denver Igarta, have been spending a lot of time riding around North Portland’s residential streets in search of bikeable routes. It will be interesting to what this “complete” bike boulevard ends up looking like. I’ll know a lot more about by middle of next week when PBOT staff presents information at a special meeting before the monthly Bike Advisory Committee meeting.

And four more bike corrals. Fantastic! That’s good to hear, but it will barely put a dent in the huge backlog of businesses that are on the waiting list.

And now, the next section:

The speed limit thing is interesting and this is the first I’ve heard of it. Currently, the Oregon Department of Transportation has control over local speed limits and it takes nearly an act of God to change them. If City of Portland can have more power over this, we could really see some streets transform into viable bikeways.

The bit about the CRC is not a big surprise. This is essentially the same thing Council agreed to when they voted to support it last year.

Read the full “100 Days and Counting” list for more details on transportation, education, the economy, and so on.

I’m looking forward to these first 100 days. I feel Adams’ staff, they’ll be running ragged for the next few months. I hope the enthusiasm and excitement of a new administration will carry them through.

Then I just read this, “Sam can’t make it happen by himself. That’s why he’s recruiting you, his most valuable asset, to help. So, don’t be shy. Let’s dig in together.”

Repairing Portland’s roads should be high priority,(that’s where I ride my bike). The repair bill is growing exponetially. Sam needs to drop the convention center hotel & the CRC those cost hundreds of millions (hotel)& billions of dollars(bridge). When he figures out how to pay for something as simple as fixing our roads, I’ll listen to these other project ideas. The Convention Hotel is projected to lose 12 million dollars a year (for 20 years) (remember the tram). That’s enough to build every bike infrastructure project in Portland for years.

You gotta love the video with the footage of Sam bike commuting to work:
http://vimeo.com/2682152
Way to lead by example!

This is a great list. While I’m excited about the on-the-ground stuff (like cycletracks, bike boulevards, bike corrals) I can also see that the real change-making initiatives for the long term are securing more funding for transportation and securing city jurisdiction over speed limits.

I am another cyclist/ community minded neighbor/ environmentally minded citizen against expansion of lanes on the CRC. This thing is way out of hand. It sounded like a good idea in the beginning to get proper bike/ ped access, lite rail, and tolls. But now expansion from 6 lanes to 8 (or 10, OR 12!!!) is ludicrous. Building more lanes= more auto trips for longer distances and more sprawl until congestion stops it again. This is a 1960’s idea that has proven failure worldwide. Allowing all of the single passenger suburban traffic to flow freely into oregon would only make the congestion happen all over Portland roads, instead of into Washington.

I voted for Sam expecting that he would put it all on the line to stop this monstrosity. You want our help, Sam? What do we do?

I’m pretty disappointed that he’s still supporting that CRC monstronsity. There needs to be tolling on both bridges with the money going to repair the bridges. Similarly, transportation dollars should be focused on repaving streets, which are in poor condition throughout the city. I respect Sam for attempting to get the Safe, Sound, and Green streets package approved, but I hope he doesn’t back down next time he tries for it..

I am back east now and it has just snowed 4 inches. If you never left Oregon, you would be amazed at how smooth the roads are in the east, even though they are salted throughout the winter.

Studded tires ruin the roadways. They should be outlawed in the metro region in deference to tire cables and chains which can be removed quickly.

Hopefully Sam tackles the poor state of the roadways.

There definitely is a bridge crossing the Columbia that needs to be improved–the railroad bridge. Upgrading that and a bunch of other track would enable those Acela trains to get up to the speed of which they are capable–and that would make rail travel to Seattle preferable to flying or driving.

When he figures out how to pay for something as simple as fixing our roads, I’ll listen to these other project ideas. The Convention Hotel is projected to lose 12 million dollars a year (for 20 years) (remember the tram). That’s enough to build every bike infrastructure project in Portland for years.

I know that this is a bike site. But there is more to a city than just biking and transportation.

One thing we need is jobs and economic stimulus. You can’t just forget everything and focus on transportation. Don’t get me wrong, transportation is what I am interested in and I think we need to do a *lot*. But I am just reminding folks that there is a *lot* to running a city. I don’t know if a convention center hotel would work out or not. I do know that I don’t really trust “predictions”. So many “experts” are wrong all the time…

I do know that Portland does not have enough “block” hotel rooms within a certain distance of the Convention Center / Rose Quarter to attract big events. I have been involved with the selection of venues for conferences and Portland would not even be looked at by some of the larger events because they usually require x number of hotel rooms within y distance, or some such silly specification. (They usually won’t even consider Portland’s free MAX across the river to a bunch of hotels, because they can’t plug it in to an easy formula). We lost the NCAA basketball finals one year due to a requirement like that.

But back to transportation.

The way government works is that money can not simply be moved around. You can’t take money that would be used for a convention center hotel and put it into roads or vice versa. (I would have thought we would all remember these discussions from the Flanders / Sauvie Island Bridge topics).

Now, I would like to see some of these things improved with new governments in place. If the rules are getting in the way of solving problems – lets take a good look at the rules and change them if need be. A good example is the rule that says you cannot toll a federal highway that already exists unless it is to pay for new construction. Well – lets change that rule. We elected a whole slew of people to office locally, regionally, state, and federal – to make change. Lets stop saying that the laws get in the way, and change the dang laws.

But that takes time. And usually even if they do get changed, they don’t get enacted for a few more years after that. Clearly nothing could be changed fast enough to hit in Sam’s first 100 days.

So just think about the fact that it is not simple or easy to just move money around (look at all the fuss about the cherry stem urban renewal stuff). On top of that – the pots of money that do exist are static. Look at the gas tax – we need to raise it. People fight raising the gas tax in the same breath they use to complain about roads needing maintenance. It makes no sense. Sam was one of the only politicians I have ever seen who was eagerly discussing raising taxes and fees to pay for needed repairs and upgrades while on the campaign trail… Lets hold his feet to the fire and get it done!

We DO need to keep the pressure on. We DO need to stop the current plans for the CRC (we need a solution – just not the one they have come up with). We DO need to hold Sam and team to their promises. We DO need to be a shining example of what to do about transportation.

Oh, and what should we “remember the tram” for? It is in, it works great, it is a key part of the bike network, it is a tourist attraction, and it is by all *real* accounts a success. What is the problem with the Tram? (If you don’t believe the bike network part, I suggest you count bikes locked up at the bottom of the Tram and in the underground OHSU parking lots. In the winter they fill up, in the summer it is downright ridiculous with bikes locked to anything that doesn’t move.)