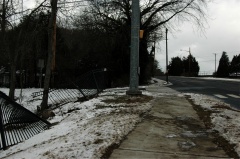 New Haven, Connecticut, which has never been known for progressive transportation initiatives, is now home to a Complete Streets law — one of only a handful in the country, and one of the most comprehensive.

When I arrived at a Yale University office last week to meet with their Transportation Options team (more on that soon), I learned that the program’s assistant director, Erin Sturgis-Pascale, also serves on New Haven’s Board of Alders (their city council).

This October, Sturgis-Pascale and another board member introduced and passed a Complete Streets bill, making New Haven one of the few communities in the country to have such a law. For this accomplishment, she has been called “the preeminent “livable streets” elected official in Connecticut.”

Grassroots activists began to seriously organize for safer streets in the wake of the traffic deaths of a Yale medicine student and a young girl several months apart in 2008. The Alders passed the bill unanimously, and Mayor John DeStefano wrote a strongly supportive editorial for the local newspaper.

The New York Times has an interesting article about the new law, including an interview with Sturgis-Pascale. 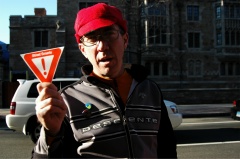 I didn’t get a chance to talk with Sturgis-Pascale at length about the new law, but we did go over the basics.

The law doesn’t make specific changes but rather forms a steering committee, charged with:

– Creating a complete streets policy for the Board of Alders to pass, including a strong statement in their belief in “fair and equal access”.

– Producing a technical design manual for the city that is compatible with national street design standards.

– Launching a process for public participation and community meetings about how to redesign particular streets.

– Educating the public about sharing the road, through the Street Smarts campaign, including a flyer giving tips on safe and courteous driving, walking, and biking.

New Haven’s traffic challenges can’t all be solved through design and education — issues exist with enforcement, transit, and state level policy — but it’s great to see this vision going strong on a local level. I am excited to see what the next year brings to New Haven.