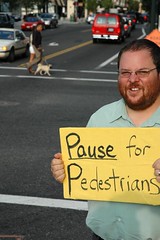 To gain more perspective on this statistic, I asked Greg Raisman, the chief traffic safety guru in the City of Portland’s Bureau of Transportation (PBOT) a few questions. Raisman thinks that it’s not just people on bikes that are safer, but that as bike traffic grows, all road users have a lower risk of being involved in a fatal crash.

BikePortland.org: Can you put this year’s zero fatals number into historical perspective?

Do you see this drop as part of a trend, or is this an anomaly?

“We are definitely seeing positive crash trends in Portland. All modes have seen reductions in crashes and fatalities over the past decade. 2008 was a potentially record-breaking year for having the lowest number of traffic fatalities on record in Portland (the answer will take some homework — I’ll do a follow-up story once Raisman delves more into the stat archives). 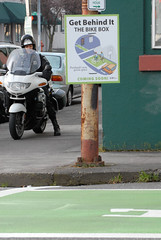 Raisman credits partnership with
the Police Bureau as one
reason fatality stats were
low in 2008.

There were a total of 19 fatal crashes with 20 traffic fatalities in 2008 (15 motor vehicles, 5 pedestrians, 0 bicycles). (Note: It’s possible this number can change over the next month if someone dies as the result of a crash that occurred in the past 30 days.)

Can you share what PBOT is doing that you think contributes to a decrease in fatal crashes/injuries (both bike and motor vehicle)?

“All traffic fatalities are a symptom of the same disease. It’s equally sad and tragic if a person is killed while walking, biking, or driving. It also appears that the conditions that make it safer for the most vulnerable make it safer for everyone. As roads become safe enough that a child can safety walk or bike to their friend’s house, the roads also become safer for driving to that friend’s house when you have to.

I think that partnerships have played a central role in improving safety in Portland. The most important partnership comes from the general community interest in having safe streets. Portlanders should be proud of leading the way towards safer streets by being amongst the safest and most courteous drivers in the country, being proactive about safe walking and biking, advocating for multi-modal safety improvements, and by electing leaders who value traffic safety over faster, wider roads.

PBOT uses a comprehensive approach to traffic safety that includes engineering, education, and enforcement. These areas are programmed to reduce driver error (speed, DUII, occupant protection), for safer routes to schools, and for bicycle and pedestrian safety. Some key elements in each are:

How do you think Portland can improve?

The areas where I think we need the most improvement are in DUII/BUII (bicycling under the influence) and motorcycle safety.”

Do you have any predictions for what bike safety engineering improvements Portlanders can expect in 2009?

“An update of the official Portland Bike Network. New bike boulevards. Portland’s first cycle track. More buffered bike lanes (a technique where paint is used to create a separated space between bike and motor vehicle traffic). New HAWK signals (like the one at 41st and E. Burnside).”

After just returning from 10 days in Southern California (Orange County), I have a renewed appreciation of just how safe it is (for all modes) to travel on Portland streets.

What do you think?

Let’s keep it up by electing people who have guts to say no to the car centric engineers. Any car centric changes to the bridge between Portland and Vancouver need to be railroaded and reformed. Not only will routes be safer, the trip times will shrink. A route takes less time if it is slower, safer, diverse and well designed with community input.

Great news, especially considering how many new bicyclists were on our roads in 2008. We still have a long way to go, but I see progress out there on a near daily basis.

Thanks for the great news, Greg.

What are HAWK signals?

“What are HAWK signals?”

HAWK stands for High Intensity Activated Walk Signal. It’s basically a traffic light that is set up with a button specifically for bikers. It only goes red for motor vehicle traffic when a bike rider pushes the button. Here’s a shot of one that was installed at E Burnside and 41st a few years ago.

I think this is wonderful but I also hope that we all continue to do our part to ride safe at all times.

Let’s make the craft of Ghost-bike manufacture an obsolete industry! Let’s also not get complacent.

Yeah! This makes me happy. 2007 was the “implementation dip” year. Let’s cross our fingers that it just keeps getting better.

Thanks, Jonathan! I’ve been through that signal (and appreciated it very much!) but had no idea what HAWK stood for:)

Thanks Greg, for all you do to make Portland streets safer to ride on – ride on!